Recent studies indicate that connexin hemichannels do not act as freely permeable non-selective pores, but they select permeants in an isoform-specific manner with cooperative, competitive and saturable kinetics. The aim of this study was to investigate whether the treatment with a mixture of IL-1β plus TNF-α, a well-known pro-inflammatory condition that activates astroglial connexin 43 (Cx43) hemichannels, could alter their permeability to molecules. We found that IL-1β plus TNF-α left-shifted the dye uptake rate vs. dye concentration relationship for Etd and 2-NBDG, but the opposite took place for DAPI or YO-PRO-1, whereas no alterations were observed for Prd. The latter modifications were accompanied of changes in Kd (Etd, DAPI, YO-PRO-1 or 2-NBDG) and Hill coefficients (Etd and YO-PRO-1), but not in alterations of Vmax. We speculate that IL-1β plus TNF-α may distinctively affect the binding sites to permeants in astroglial Cx43 hemichannels rather than their number in the cell surface. Alternatively, IL-1β plus TNF-α could induce the production of endogenous permeants that may favor or compete for in the pore-lining residues of Cx43 hemichannels. Future studies shall elucidate whether the differential ionic/molecule permeation of Cx43 hemichannels in astrocytes could impact their communication with neurons in the normal and inflamed nervous system. View Full-Text
Keywords: connexons; dyes; permeability tracers; permeation; TNF-α; IL-1β; astrocytes connexons; dyes; permeability tracers; permeation; TNF-α; IL-1β; astrocytes
►▼ Show Figures 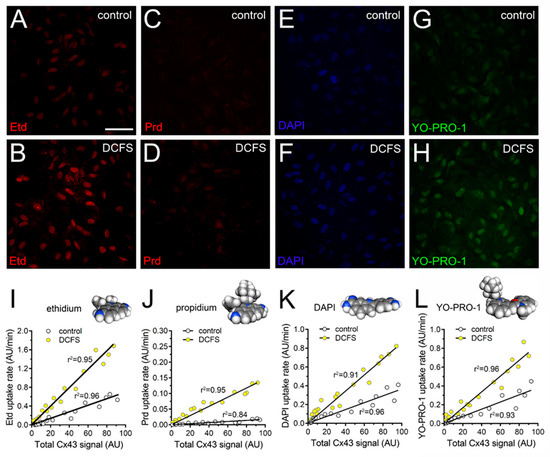