Nutri-Epigenetics and Gut Microbiota: How Birth Care, Bonding and Breastfeeding Can Influence and Be Influenced?
Previous Article in Journal

Twin Research in the Post-Genomic Era: Dissecting the Pathophysiological Effects of Adversity and the Social Environment

:
Pulsatility index (PI) values in a fetal middle cerebral artery (MCA) were compared in no-risk pregnancies to examine the differences related to auditory stimulation test and pregnancy order. The study included 196 women with no-risk pregnancies selected from the database of more than 1000 pregnant women divided into two groups. Group 1 consisted of 98 nulliparous women (C1 = 98) and Group 2 consisted of 98 parous women (C2 = 98). All pregnant women were of comparable age and fetal gestational age (GA) when MCA-PI values were recorded. Measurements of PI values in fetal MCA were obtained before and immediately after the application of fetal auditory stimulation test. The MCA-PI measuring was conducted in the period between the 36th and the 41st week of GA. The results showed that PI baseline values and PI values after defined auditory stimulation were significantly different when measured in nulliparous women compared to parous women (p = 0.001; p = 0.003, respectively), while no group differences were observed in relative PI value changes due to auditory stimulation. These findings suggest that hemodynamic changes in fetal MCA caused by defined auditory stimulation measured by PI value changes may be valuable in the assessment of fetal auditory perception functionality and its development.
Keywords:
Pulsatility index; fetal auditory perception; parous and nulliparous pregnancy; middle cerebral artery

The investigation of fetal behavior and its reactions to different stimuli indicates the cortical structure’s development and maturity. Observing and examining the maturity of the fetal auditory system is crucial, as it may indicate the auditory potentials necessary in speech and language development. Moreover, it may point to a need for the application of stimulation procedures. Certain follow-up studies, including those from our own research group, have confirmed the association between fetal reactions to defined sound stimulus, neonatal outcomes, language development, and early child development [1,2,3]. Furthermore, there is evidence that the intrauterine auditory stimulation may have an important role in shaping later auditory development [4], which may reflect not only on speech-language development, but also on the overall child development. These findings point to the importance of auditory perception estimation at the early ontogenetic age.
Different methodologies applied in this research field have confirmed fetal auditory system maturity and functionality [5,6,7,8,9,10,11,12,13,14,15,16,17]. The examination of fetal auditory perception by acoustic stimulation may point to auditory pathways maturity and capability of fetal auditory perception. In that manner, the method of Prenatal Hearing Screening (PHS) was developed and applied by Sovilj and Ljubic in 1992 [18], while its application in further studies gave reliable findings with regards to fetal auditory reactions [2,19,20,21], revealing fetal maturity as well as presenting a potential for a reliable prenatal hearing screening test. The PHS method is based on measuring the Pulsatility Index (PI) before and after defined auditory stimulation [19]. Research in this field has shown that PI is the most appropriate parameter in examining fetal auditory reactions caused by defined sound stimuli when compared to Resistance index and bulbar movements [19].
Reference ranges for PI in the middle cerebral artery (MCA-PI) in normal and complicated pregnancies have been established in many studies [22,23,24,25,26,27,28,29]. When observing the reference range in normal pregnancies, there is always the parabolic shape of the PI curve which indicates the decrease of fetal MCA-PI with increasing gestational age (GA) [24,25]. The PHS application has the aim to establish differential and diagnostic parameters of fetal auditory reactions to pregnancy conditions which would be indicators for fetal well-being estimation, as well as early stimulation procedures’ application. The fetal auditory system becomes functional in the 25th GA [13]: the fetus begins with active hearing when the ear and cochlea are structurally formed and when hearing becomes the main information channel [30]. Research in the field of prenatal auditory perception indicates that auditory nerve pathway is formed by increasing the response rate with increasing GA; this means that due to vibroacoustic stimulation, in 7% of fetuses, responses are present between the 20th and 22nd GA, in 22% of fetuses, responses are present between the 24th and 26th GA, in 89% of fetuses, responses are present between the 26th and 28th GA while in 100% of fetuses, responses are present between the 30th and 32nd GA [31]. A recent study also reports that fetal movement responses to vibroacoustic stimulation are consistent after the 28th GA, suggesting that fetal hearing develops at or before the 28th week of intrauterine life [32]. Even in studies that indicate an incomplete maturation of fetal auditory system, it is emphasized that the developing auditory system enables response to sound in utero [33], which is shown by studies that measure fetal movement or heart rate response to sound at around the 25th and 27th GA [34]. This confirms that hearing has improved dramatically by term birth [35]. On the other hand, there has been growing evidence which proves that the development and maturation of the auditory system depend substantially on the afferent activity supplying inputs to the developing centers [36]. Taking into account all these physiological aspects, changes of PI in the middle cerebral artery (MCA) may be detected after the 27th gestational week as an indicator of functional and psychological maturity in the fetal auditory system.
Considering the psychological and physiological differences between the first and the second pregnancy, our aim was to establish whether these can be observed at the level of fetal auditory perception. As it is known from the literature, MCA-PI is higher in parous than in nulliparous women [29,37], but we assume that these differences do not affect fetal auditory reactivity which is influenced by fetal auditory system maturation. In that manner, this study aims to compare Pulsatility index (PI) values in the fetal middle cerebral artery (MCA) and examine the differences related to auditory stimulation test in nulliparous and parous women with no risk pregnancies.

In this study, we show that PI value changes may be considered as complex measurement values that enable the examination of fetal auditory perception. This may be linked with fetal heart rate, vasoconstriction, or vasodilatation, but in this paper, our aim was to establish the link between RePI and AbsPI with fetal responses caused by auditory stimulation. As it was determined that changes of the RePI and AbsPI do not depend on pregnancy order, they may be used as the parameters of fetal auditory responses examination which should be subject to further research.

This study was supported within the Projects financed by the Ministry of Education, Science and Technological Development of the Republic of Serbia (Grant No. OI178027, Grant No. TR32032). 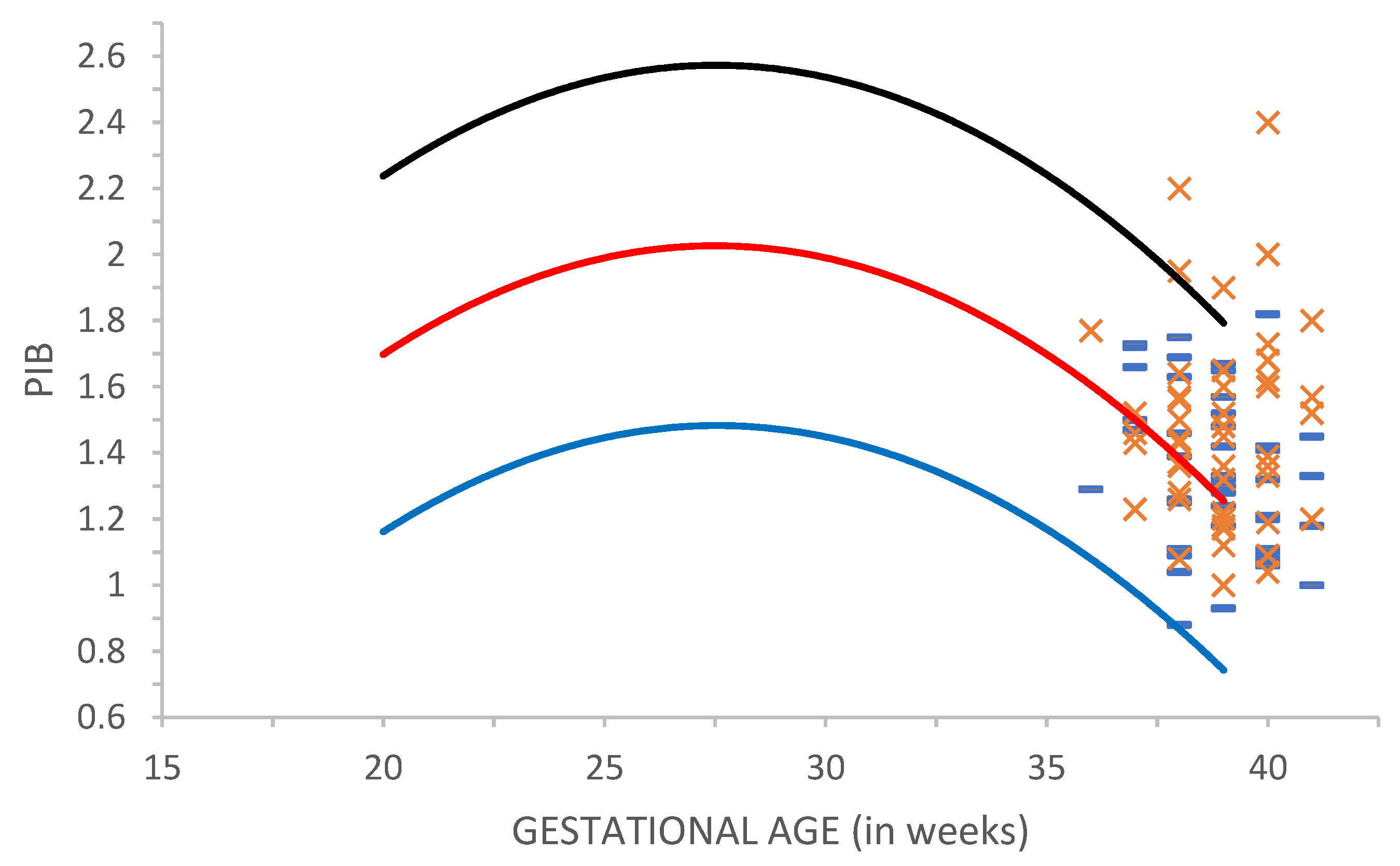