Being an essential macroelement, sulfur (S) is pivotal for plant growth and development, and acute deficiency in this element leads to yield penalty. Since the last decade, strong evidence has reported the regulatory function of silicon (Si) in mitigating plant nutrient deficiency due to its significant diverse benefits on plant growth. However, the role of Si application in alleviating the negative impact of S deficiency is still obscure. In the present study, an attempt was undertaken to decipher the role of Si application on the metabolism of rice plants under S deficiency. The results showed a distinct transcriptomic and metabolic regulation in rice plants treated with Si under both short and long-term S deficiencies. The expression of Si transporters OsLsi1 and OsLsi2 was reduced under long-term deficiency, and the decrease was more pronounced when Si was provided. The expression of OsLsi6, which is involved in xylem loading of Si to shoots, was decreased under short-term S stress and remained unchanged in response to long-term stress. Moreover, the expression of S transporters OsSULTR tended to decrease by Si supply under short-term S deficiency but not under prolonged S stress. Si supply also reduced the level of almost all the metabolites in shoots of S-deficient plants, while it increased their level in the roots. The levels of stress-responsive hormones ABA, SA, and JA-lle were also decreased in shoots by Si application. Overall, our finding reveals the regulatory role of Si in modulating the metabolic homeostasis under S-deficient condition. View Full-Text
Keywords: transcriptional regulation; primary metabolism; hormones; nutritional stress transcriptional regulation; primary metabolism; hormones; nutritional stress
►▼ Show Figures 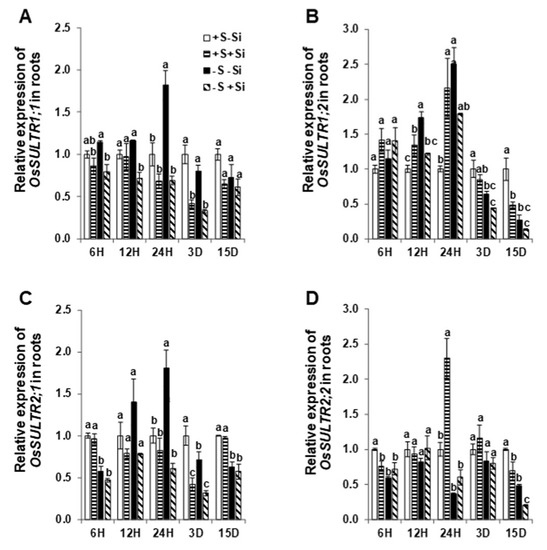