Characterizing the Fused TvG6PD::6PGL Protein from the Protozoan Trichomonas vaginalis, and Effects of the NADP+ Molecule on Enzyme Stability
Previous Article in Journal

Vitamin B6 and Diabetes: Relationship and Molecular Mechanisms
Previous Article in Special Issue

Plants have been used for centuries to treat several illnesses. The Plectranthus genus has a vast variety of species that has allowed the isolation of cytotoxic compounds with notable activities. The abietane diterpenes 6,7-dehydroroyleanone (DeRoy, 1), 7α-acetoxy-6β-hydroxyroyleanone (Roy, 2), and Parvifloron D (ParvD, 3) were obtained from Plectranthus spp. and showed promising biological activities, such as cytotoxicity. The inhibitory effects of the different natural abietanes (1-3) were compared in MFC7, SkBr3, and SUM159 cell lines, as well as SUM159 grown in cancer stem cell-inducing conditions. Based on the royleanones’ bioactivity, the derivatives RoyBz (4), RoyBzCl (5), RoyPr2 (6), and DihydroxyRoy (7), previously obtained from 2, were selected for further studies. Protein kinases C (PKCs) are involved in several carcinogenic processes. Thus, PKCs are potential targets for cancer therapy. To date, the portfolio of available PKC modulators remains very limited due to the difficulty of designing isozyme-selective PKC modulators. As such, molecular docking was used to evaluate royleanones 1-6 as predicted isozyme-selective PKC binders. Subtle changes in the binding site of each PKC isoform change the predicted interaction profiles of the ligands. Subtle changes in royleanone substitution patterns, such as a double substitution only with non-substituted phenyls, or hydroxybenzoate at position four that flips the binding mode of ParvD (3), can increase the predicted interactions in certain PKC subtypes. View Full-Text
Keywords: Plectranthus; royleanones; hemi-synthesis; PKC activity; isozyme-selectivity; molecular interactions Plectranthus; royleanones; hemi-synthesis; PKC activity; isozyme-selectivity; molecular interactions
►▼ Show Figures 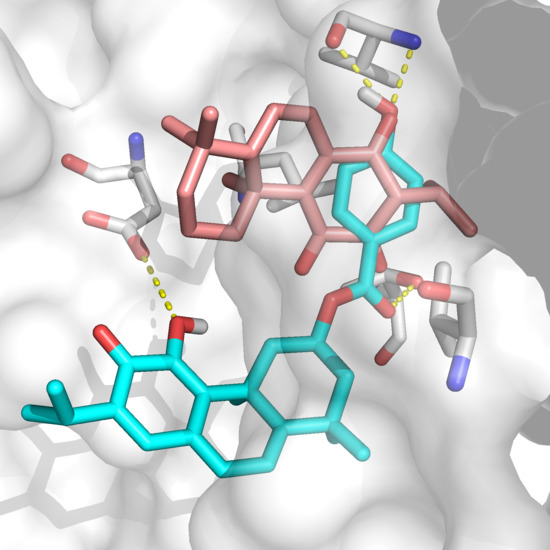