Vitamin D and Cardiovascular Risk: Which Implications in Children?

Epidemiological studies have found a significant inverse association between serum vitamin D (25OHD) levels and cardiac injury or hypertension. In vitro, vitamin D appears to suppress the intracellular NF-κB pathway and renin synthesis attenuating the progression of coronary artery disease [1]. This could be related to an inflammation increase due to vitamin D deficiency [2]. However, vitamin D supplementation did not clearly show cardiovascular improvements in adults and children/adolescents.
This review provides a summary of the actual knowledge of the role of vitamin D in cardiovascular disease (CVD) according to its pathophysiological aspects. Moreover, we discuss whether vitamin D supplementation may influence cardiovascular risk markers with its anti-inflammatory function. We included in this review only English language studies meeting these criteria: participants were children or adolescent; measured endpoints were blood pressure, lipid profile, pulse wave velocity, and CVD events. Only papers published from 1 January 2015 and 31 March 2020 were considered.

4. The Impact of Vitamin D Supplementation 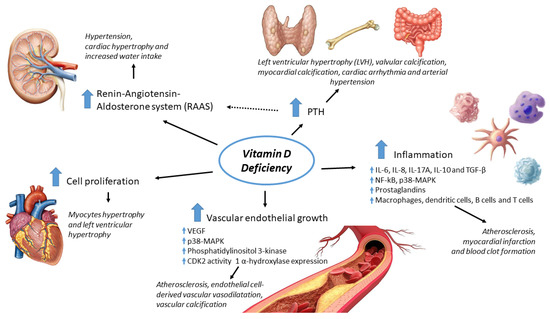