Characterization of Effectiveness in Concerted Ih Inhibition and IK(Ca) Stimulation by Pterostilbene (Trans-3,5-dimethoxy-4′-hydroxystilbene), a Stilbenoid
Next Article in Special Issue

Coronin 1 Is Required for Integrin β2 Translocation in Platelets

Remodeling of the actin cytoskeleton is one of the critical events that allows platelets to undergo morphological and functional changes in response to receptor-mediated signaling cascades. Coronins are a family of evolutionarily conserved proteins implicated in the regulation of the actin cytoskeleton, represented by the abundant coronins 1, 2, and 3 and the less abundant coronin 7 in platelets, but their functions in these cells are poorly understood. A recent report revealed impaired agonist-induced actin polymerization and cofilin phosphoregulation and altered thrombus formation in vivo as salient phenotypes in the absence of an overt hemostasis defect in vivo in a knockout mouse model of coronin 1. Here we show that the absence of coronin 1 is associated with impaired translocation of integrin β2 to the platelet surface upon stimulation with thrombin while morphological and functional alterations, including defects in Arp2/3 complex localization and cAMP-dependent signaling, are absent. Our results suggest a large extent of functional overlap among coronins 1, 2, and 3 in platelets, while aspects like integrin β2 translocation are specifically or predominantly dependent on coronin 1. View Full-Text
Keywords: actin; Arp2/3 complex; cAMP; coronin 1; integrin β2; platelets; thrombin; collagen; prostacyclin actin; Arp2/3 complex; cAMP; coronin 1; integrin β2; platelets; thrombin; collagen; prostacyclin
►▼ Show Figures 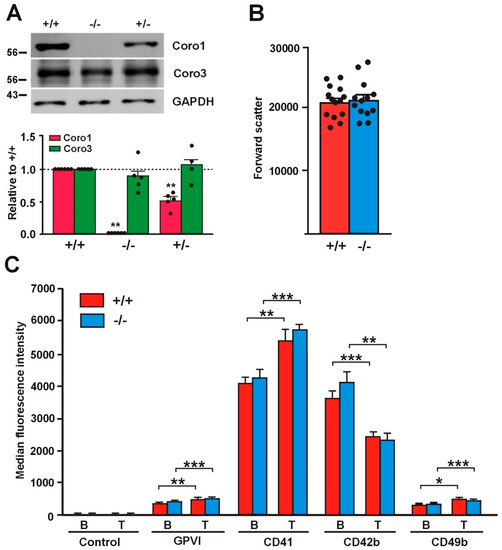