Posttraumatic stress disorder (PTSD) is a condition caused by severe stress and subsequent chronic distress, which is generally associated with a life-threatening experience, such as a natural disaster, military combat, traffic accidents, incurable disease or a personal tragedy. PTSD may result in neuropsychological [1,2], cardiovascular [3], gastrointestinal, metabolic, endocrine, and even oncological diseases [4]. Current pharmacological treatment for PTSD is not adequately effective and may cause serious side effects.
Although incidence of PTSD is increasing, approximately 60–80% of humans and animals exposed to severe stress do not develop PTSD [5,6,7]. This individual resistance to PTSD is apparently based on genetically determined potency of endogenous defense systems also called stress-limiting systems, which include heat shock proteins (HSPs), antioxidants, nitric oxide, prostaglandins, and serotonergic, GABAergic and other systems [8,9,10].
Endogenous defense systems can be enhanced by intermittent hypoxia conditioning (IHC), which has been shown to be efficient, safe, and free of side effects [8]. In particular, IHC is highly cardio-, vaso-, and neuroprotective [11,12]. In clinical and experimental studies, IHC prevented behavioral disorders and cerebral neuronal damage in epilepsy [13], Parkinson disease [14], and Alzheimer’s disease [12,15]. IHC preconditioning [16] and postconditioning [17] were shown to abolish development of stress-induced anxiety in the rat “stress-restress” model of PTSD. Recently we found that rats treated with IHC prior to predator stress exhibited significantly less anxiety-like behavior, a lesser drop of plasma corticosterone, and reduced structural signs of adrenal gland dystrophy, all signs characteristic of PTSD [18]. In fact, IHC exerted a robust anti-stress effect in naïve rats, as evidenced from less anxiety during an elevated X-maze test [18].

2.2. IHC Prevented Detrimental Effects of PTSD on the Heart

PTSD resulted in a 33% decrease in myocardial glycogen compared to the control (p < 0.001) (Figure 1). IHC alone did not induce any change in glycogen. In stressed rats, IHC completely prevented the stress-induced exhaustion of myocardial glycogen; in the PTSD+IHC group, the myocardial content of glycogen was 33% higher than in the PTSD group (p < 0.001) and did not significantly differ from the control.
Figure 2 shows that staining of glycogen in sections of heart tissue from PTSD rats (Figure 2B) was considerably less intensive than in the control (Figure 2A). The glycogen reaction was similar in liver of control (Figure 2A), IHC (Figure 2C), and PTSD+IHC rats (Figure 2D) and significantly more intensive than in the liver of PTSD rats (Figure 2B).

In hearts from 15 untreated control rats, histological analysis found no morphological damage. Eight hearts of 15 PTSD rats had myocardial damage (p < 0.005 vs. control rats). Only one heart of 15 IHC rats had damage (p > 0.05 vs. control rats). Two hearts of 15 IHC+PTSD rats had damage (p < 0.05 vs. PTSD rats and p > 0.05 vs. control rats).
The specific myocardial changes caused by PTSD are shown in Figure 3. Normal cardiomyocytes observed in the heart from control, IHC, and PTSD+IHC rats had clear cell borders and cross-striation (Figure 3A,C,D). In the myocardium of PTSD rats, cell borders were often blurred, and cross striations were lost at some sites. These findings reflected focal alterations in sarcomere structure due mostly to I-disk destruction. In some areas, A disks merged into a solid, glowing, white conglomerate. These changes suggest the presence of segmental metabolic and hypoxic injuries and impaired myocardial contractility [19]. Ischemic area with focal disaggregation and lysis of myofibrils were visible in the myocardium of PTSD rats (Figure 3B). Since signs of myocardial damage in PTSD+IHC rats were rare, these results demonstrated a remarkable ability of IHC to ameliorate PTSD-induced myocardial injury.

2.2.3. IHC Alleviated Oxidative Stress Induced by PTSD in the Heart

Figure 4 shows that PTSD increased LP and protein oxidation products by 35% and 50%, respectively, compared to control (p < 0.001 for both). IHC alone increased LP by 18% compared to control (p = 0.004) and left unchanged the content of protein carbonyls. At the same time, IHC significantly limited oxidative stress in the myocardium, which was evident by a 14% decrease in LP products and 23% decrease in protein oxidation products in the PTSD+IHC group compared to the PTSD group (p = 0.002 for both). However, the indexes of oxidative stress remained significantly higher than in the control group.

2.3. IHC Prevented Detrimental Effects of PTSD on the Liver

2.3.3. IHC Alleviated Oxidative Stress Induced by PTSD in the Liver

2.4. IHC Prevented Detrimental Effects of PTSD on the Brain

2.4.2. IHC Alleviated Oxidative Stress Induced by PTSD in the Brain

Experiments were performed on male Wistar rats, weighing 210–230 g at the beginning of the study. Eighty rats were randomly divided into four groups of 20 each: (1) Control, (2) PTSD, (3) IHC, and (4) PTSD+IHC. Rats were housed in standard rat cages and received rat chow and tap water ad libitum. The animals were kept at controlled temperature (22–25 °C) and humidity (55%). A 12:12 h light–dark cycle was maintained with lights on between 07:00 and 19:00. All animal procedures were performed in accordance with the U.S. National Research Council Guide for the Care and Use of Laboratory Animals (publication 85-23, revised 2011). The experimental protocols (Project 0520-2019-0030) were approved by the Animal Care and Use Committee of the Institute of General Pathology and Pathophysiology (18 January 2019).

To induce PTSD, we used a modified model of predator stress that was initially described by Cohen and Zohar [79] and as used in our prior studies [18,80]. Predator stress was accomplished by exposing rats of the PTSD group to cat urine scent for 15 min daily for 10 days. PTSD rats were then were given 15 days rest under predator stress-free conditions. Control rats were rested during this 25-day period. A graphical timeline of the protocol has been published [18].

The predator stress outcome was evaluated using the elevated X-maze test as employed in our prior study [18]. This test was done on the day following completion of the post-stress, 15-day rest period (PTSD group), or after completion of IHC (IHC and PTSD+IHC groups). The total duration of the test was 10 min. Control rats were tested together with rats from experimental groups in a blinded fashion. The behavior of rats in the maze was recorded and tracked using the video system SMART and analyzed with SMART 3.0 software. The number of entries into open and closed arms and the time spent in the open and closed arm were recorded. Based on these measurements, an anxiety index (AI) was calculated [82]:
AI = 1 − {[(time in open arms/Σ time on maze) + (number of entries into open arms/Σnumber of all entries)]/2}.

4.5. Blood and Tissue Collection and Storage

Rats were sacrificed by overdose of diethyl ether, decapitated, and blood was collected. Blood serum was removed from clotted blood and stored frozen in Eppendorf tubes at −70 °C. The heart, liver, and brain cortex were excised and stored in 10% buffered formalin for histochemical analysis or frozen in liquid nitrogen and stored at −70 °C for biochemical studies.

The activity of brain MAO-A was measured in brain mitochondrial fraction as described by Tipton et al. [83]. Reagents were purchased from Sigma (Basel, Switzerland). Before adding a specific MAO-A substrate, 5-hydroxytriptamine creatinine sulfate (4 mM), brain homogenates were preincubated with 100 µL of 0.5 µM selegeline, a selective, irreversible inhibitor of MAO-B activity for 60 min at 37 °C. For inhibition of MAO-B activity, 100 µL of 1 µM clorgyline was added to 1 mL of mitochondrial suspension containing MAO in the membrane-bound form and incubated for 60 min at 37 °C. Brain homogenate was prepared in 0.067 M sodium phosphate buffer (e.g., 1/10 w/v; pH 7.2) and centrifuged to isolate the mitochondria. The isolation of rat mitochondria was performed according to the method described by Satav and Katyare [84]. MAO activity was measured spectrophotometrically and expressed as nM serotonin/mg protein/min.

AST and ALT activities were measured according to the method of Reitman and Frankel [85]. The method is based on aminotransferase catalysis of reversible transfer of aspartic acid aminogroups to α-ketoglutaric acid with formation of pyruvate. Pyruvate was measured photometrically at 505 nm using the reaction with 2,4-dinitrophenyl hydrazine in alkaline medium. AST and ALT were measured in blood serum and liver tissue using Klini-test-AST and Klini-test ALT, respectively, manufactured by ECO SERVICE (St. Petersburg, Russia).

Samples of heart and liver tissue were fixed in 10% buffered formalin, embedded in paraffin, and sliced into transversal 5–7 µm sections. Liver and some heart sections were used for glycogen detection, and the other heart sections were used for polarized light microscopy.
For glycogen detection, the heart and liver sections were stained with the periodic acid Schiff (PAS) reagent, which is specific for neutral muscins, and with alcian blue, which is specific for acidic muscins [86,87]. Glycogen-depleted sections were used as control. Glycogen stores in the tissue were depleted prior to the PAS reaction by incubation of deparaffinized sections with 0.46% amylase solution at 37 °C for 20 min. Optical density of section staining was measured on microphotographs with an Axioplan 2 Imaging microscope (Carl Zeiss, Berlin, Germany) using AxioVision (Carl Zeiss, Berlin, Germany) and ImageJ (NIH, Bethesda, MD, USA) software.
Deparaffinized myocardial sections were examined with polarized light microscopy (Axioplan 2 Imaging, Carl Zeiss, Berlin, Germany). Signs of myocardial ischemia was evident as white spots on dark background. Undamaged fibers remained non-luminous, i.e., black in polarized light.

The tissue content of lipid peroxidation products was assayed by an extraction, spectrophotometric method [88]. This method allows differential measurement of acyl peroxides among phospholipids extracted from propanol-2 phases along with non-esterified intermediates of fatty acid peroxides extracted from the heptane-phase. Results were expressed as oxidation indices: E232/220 for relative contents of conjugated dienes, E278/220 for ketodienes and conjugated trienes, and E400/200 for Schiff bases.

Oxidation products were measured as carbonylated proteins according to the method of Levine et al. [89], which uses 2,4-dinitrophenylhydrazine as a reagent and measures the 2,4-dinitrophenylhydrazone derivative content in proteins. The carbonyl content was calculated using an extinction coefficient 22,000 M/l/cm and expressed as nmol protein carbonyls per mg of plasma protein. Protein concentration was determined by the Bradford protein assay method, using the Bio-Rad Protein Assay kit (Bio-Rad, Hercules, CA, USA).

Values were calculated as means ± standard deviations (S.D.). A one-factor ANOVA with Neuman–Keulls test was used for multiple comparisons (e.g., control vs. PTSD, control vs. IHC, PTSD vs. IHC). Fisher’s exact test was used to compare numbers of rats with and without morphological signs of heart damage in different groups. p-values less than 0.05 were considered to be significant. 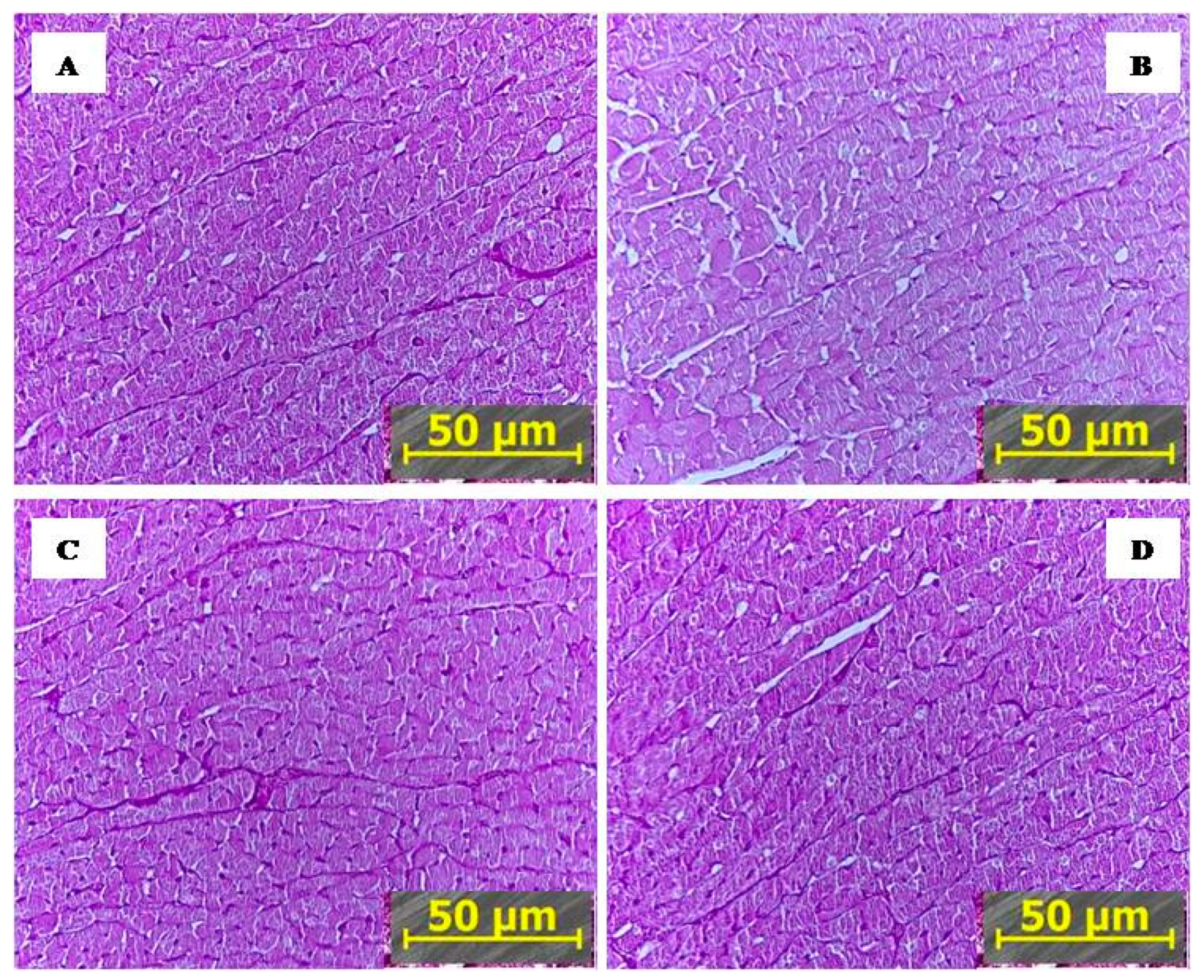 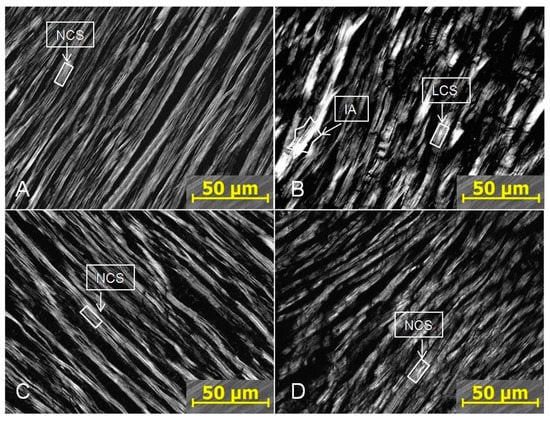 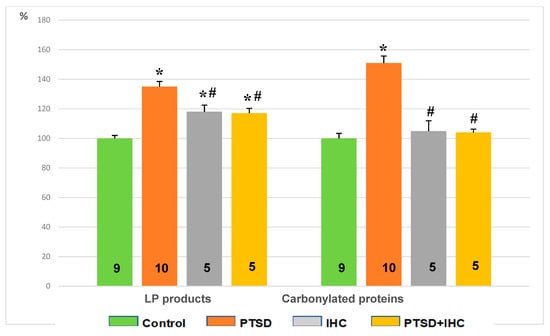 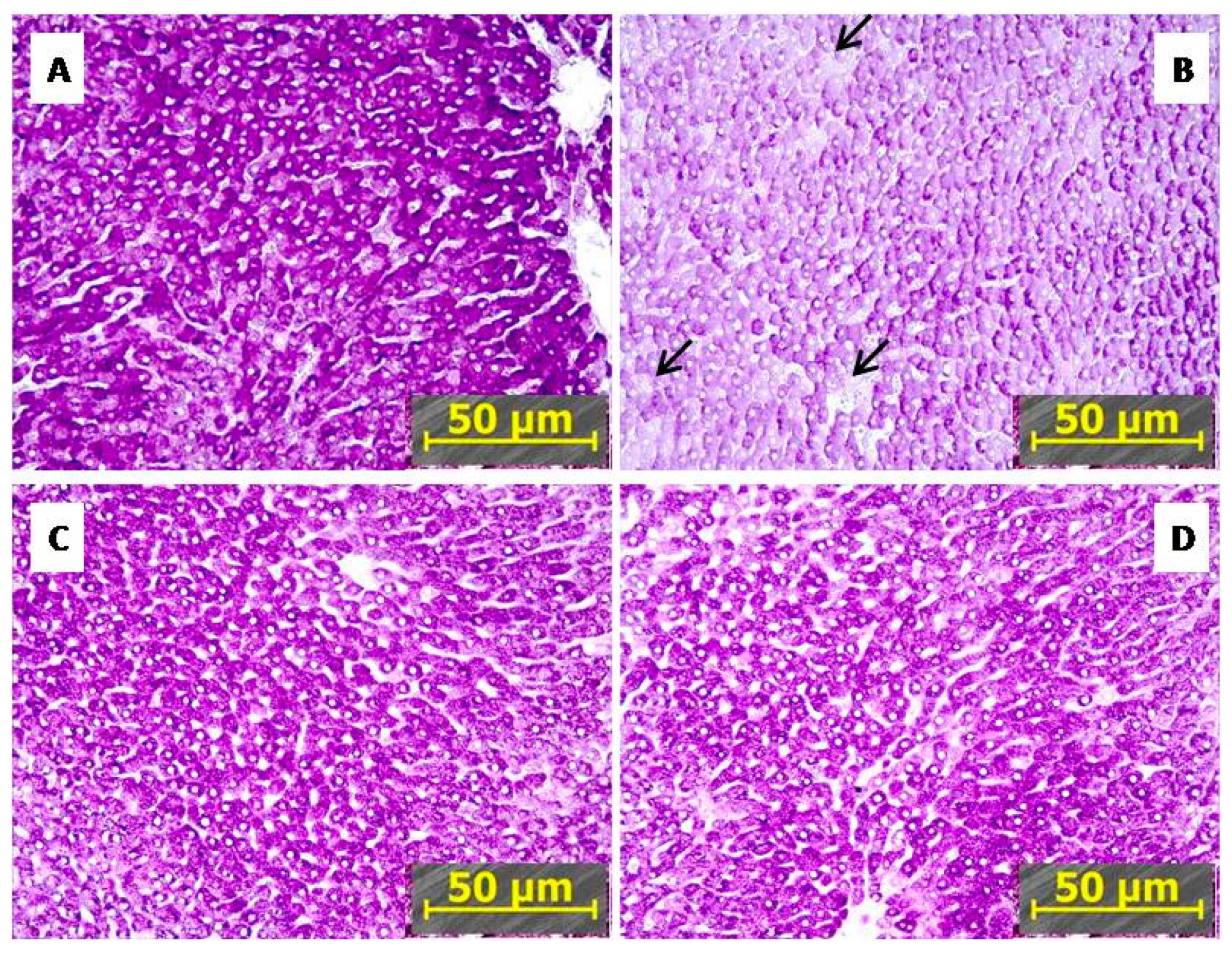 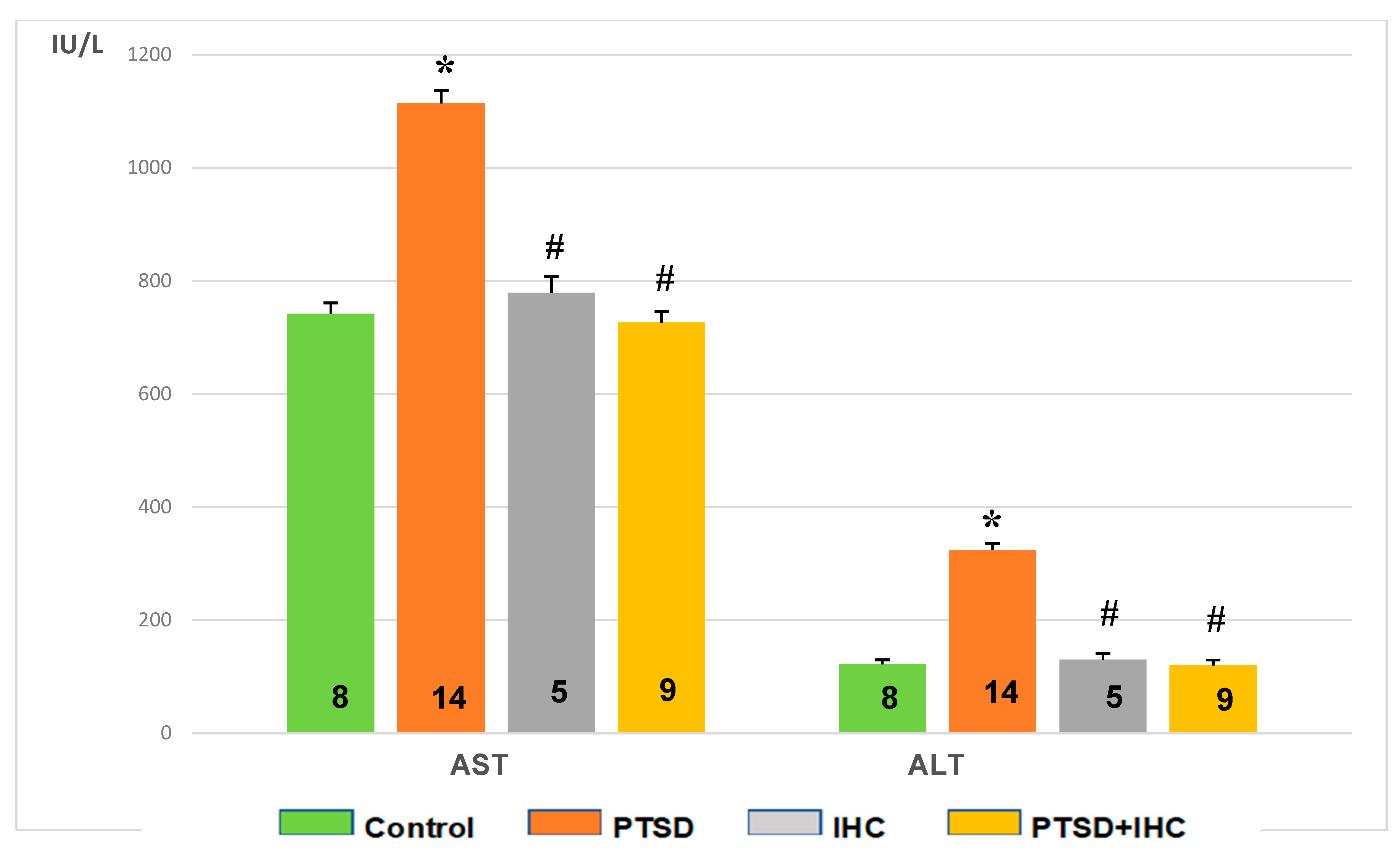 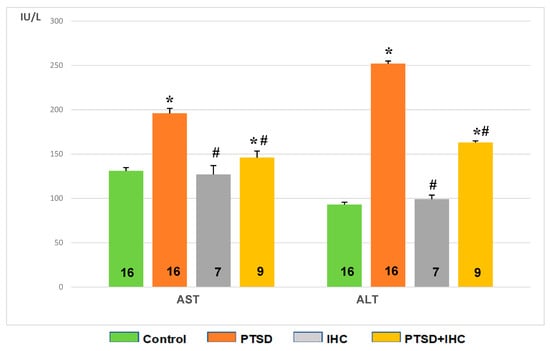 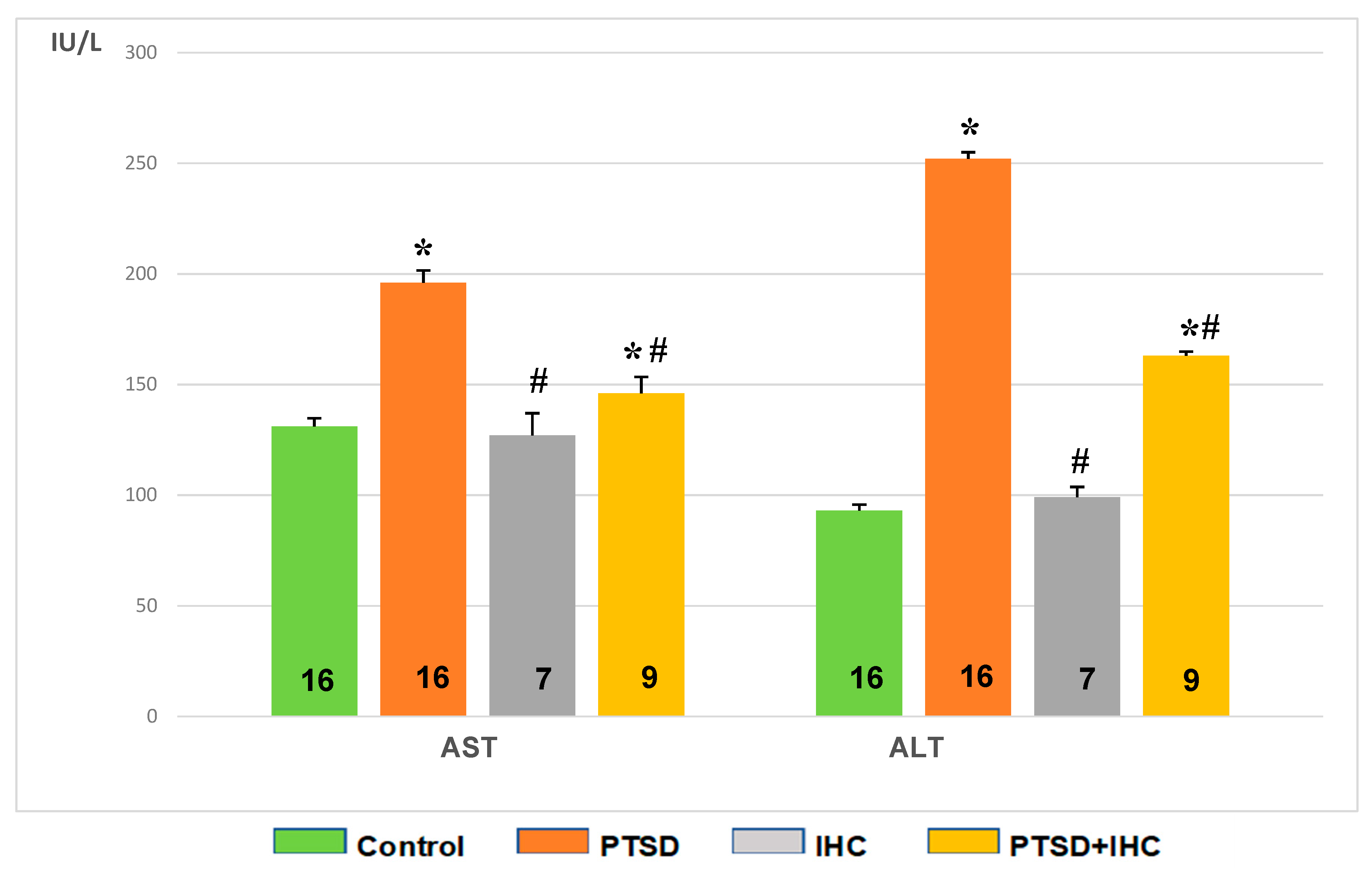 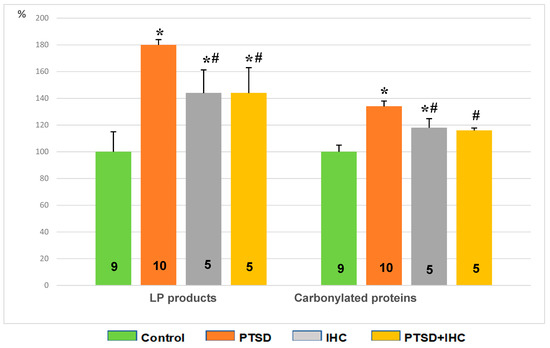 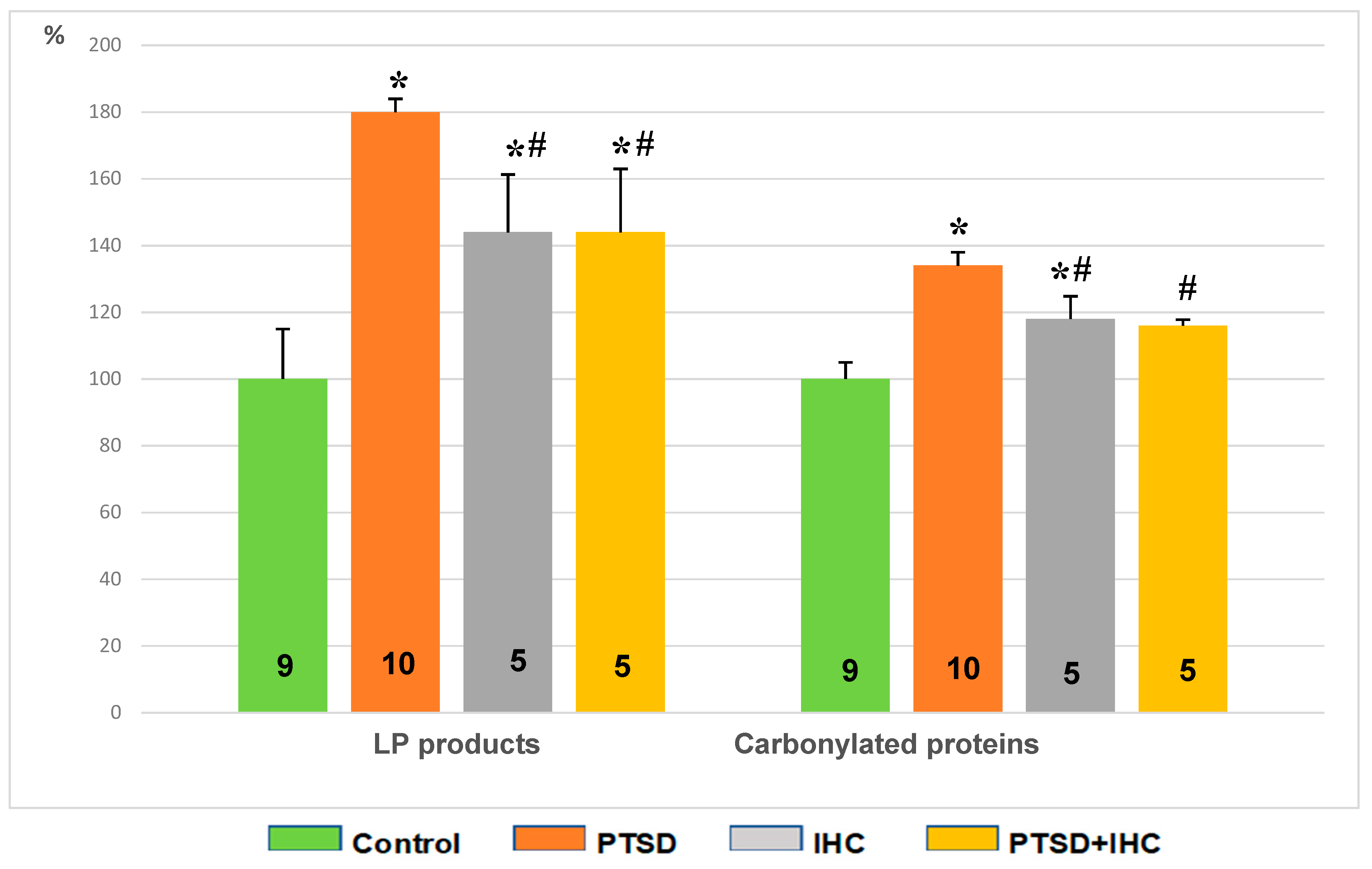