Tumor cells exhibit a specialized metabolism supporting their superior ability for rapid proliferation, migration, and apoptotic evasion. It is reasonable to assume that the specific metabolic needs of the tumor cells can offer an array of therapeutic windows as pharmacological disturbance may derail the biochemical mechanisms necessary for maintaining the tumor characteristics, while being less important for normally proliferating cells. In addition, the specialized metabolism may leave a unique metabolic signature which could be used clinically for diagnostic or prognostic purposes. Quantitative global metabolic profiling (metabolomics) has evolved over the last two decades. However, despite the technology’s present ability to measure 1000s of endogenous metabolites in various clinical or biological specimens, there are essentially no examples of metabolomics investigations being translated into actual utility in the cancer clinic. This review investigates the current efforts of using metabolomics as a tool for translation of tumor metabolism into the clinic and further seeks to outline paths for increasing the momentum of using tumor metabolism as a biomarker and drug target opportunity.
Keywords: translational medicine; metabolomics; metabolism; cancer; tumor; biomarker; drug discovery; metabolic homeostasis translational medicine; metabolomics; metabolism; cancer; tumor; biomarker; drug discovery; metabolic homeostasis

2. Cancer-Specific Metabolism as a Drug Target Opportunity at Present and What We Can Learn from Historical Tumor Metabolic Drug Target Discovery?

3. Does Cancer Cell Metabolism Leave a Disease Specific Metabolic Imprint That Can Be Used as a Biomarker?

Arguably, biomarker discovery, is the area of altered cancer metabolism that has attracted most research with >1500 publications returned through https://pubmed.gov search on “cancer” and “metabolomics” and “biomarker”. Most of these are published since 2008. Finding biomarkers is not only interesting from a diagnostic perspective. Biomarkers often arise from a pathology specific biochemistry, and may thus lead to new drug targets as well. There is a clear rationale for assuming that tumor elements can reach the blood stream through for example mechanisms of direct export, necrosis, apoptosis, microvesicle budding, or phagocytosis. It is therefore conceivable that direct biochemical evidence of tumor presence is possible to measure in the blood. With an altered metabolism in cancer cells, there is a possibility that this altered metabolism will be reflected in the blood and potentially used as biomarker. However, there is general problem with metabolic biomarkers, the “metabolites” are generic, and that is there is no tumor unique metabolite. All metabolites are potentially present in all cells as energy, signaling, or structural elements. Also, the altered tumor metabolism shifts the fluxes through individual metabolite pools and potentially skews the relative proportion of specific metabolite pairs. This is further complicated by the following. (1) Since the tumor in most cases is very small in relation to the rest of the body, there is a fair chance that a tumor specific metabolic profile leaking out from tumor cells is diluted and disappears in the blood volume where a large contribution to the blood metabolic profile comes from metabolic active muscle cells which constitute approximately 40% of human body weight. (2) The tumor triggers innate immune responses such as inflammatory responses, which, in turn, create much larger alterations to the blood metabolic profile than the primary changes leaked out from the tumor cells. This has been observed when comparing the blood metabolic profiles of nonrelated diseases where a majority of metabolic differences were found not to be disease specific [81]. (3) The blood metabolic profile will reflect what we eat and our life style which further convolutes the cancer-specific metabolites leaking out from the tumor. Because of (1), (2), and (3), blood metabolic biomarkers can be more complicated to assign than for example cancer-specific DNA methylations which can achieves specificities in clinical cohorts close to 100% [82]. In fact, a recent study where a multi panel of levels of certain proteins and mutations of free circulating DNA was applied to different tumors in different organs, reported not only 99% specificity but also showed that it was possible to assign the organ in which the tumor was localized for 83% of the patients [83]. This has raised the question of the potential of universal cancer screening, as opposed to organ based cancer screening for diagnostic purposes [84].
Despite the massive amount of metabolomics literature reports proposing tentative biomarkers for various cancers, no single metabolite or metabolite panel have found clinical utility over the last 10 years. A recent review compiled various biomarkers, with some sort of validation for several different pathologies including cancer, obtained through metabolomics [85]. Many of these validations included running comparable cohorts at a separate point in time, i.e., comparing cancer cohort 1 with healthy control cohort 1 and, subsequently, validating metabolic differences by comparing cancer cohort 2 with healthy control cohort 2. One possible reason to that none of these “validated” biomarkers have reached to the clinic yet is that there is no mechanistic explanation for their presence and this lack of biochemical understanding makes the “clinic” reluctant to perform further costly validations, clinical trials and implementation. If the number of studies or “validations” supporting an association between a biomarker and a specific type of cancer was then sole driver for clinical implementation, metabolites frequently associated with that cancer should attract clinical interest. We tested this hypothesis by querying (https://pubmed.gov) using the words “breast cancer”, “biomarker”, and “metabolomics”. We found 69 studies using metabolomics that were associating annotated metabolites with breast cancer in some sense in either clinical patient material or cellular models. We subsequently grouped the resulting table by the number of reports a specific metabolite is associated with breast cancer. The result for all metabolites reported at least twice is shown in Table 3. The amino acid glutamate comes out at the top with 13 reports. Is glutamate a good biomarker candidate for diagnosis of breast cancer? Most likely not. Altered biofluid glutamate levels is also associated with seizures in Wilson’s disease [86], cardiopulmonary bypass in infants [87], probable Alzheimer’s disease and depression [88], the relationship between lung cancer and chronic obstructive pulmonary disease [89], and multiple sclerosis [90], to mention just a very small subset of reports on glutamate association with various pathology. Mechanistically, glutamate could be associated with cancers in terms of increased glutaminolysis (cancer cells dependency of extracellular glutamine) which through the action of glutaminase enzyme, converting glutamine to glutamate (Figure 1c). But, since glutamate clearly is associated with many other pathologies, the observations of altered glutamate levels in cancer patients is most likely mechanistically not directly linked to the cancer itself, but rather to secondary biochemical events such as inflammatory responses and thus not interesting to pursuit for further clinical validation of its role in the cancer context.
Based on Table 3, it seems as if a significant number of deregulated metabolites in cancer samples were reported extensively, yet none have translated to the clinic and assuming their biochemical specificity towards tumor development is most likely an oversimplification for several reasons: (i) flawed understanding in differentiating tumor versus normal metabolites/metabolite levels and (ii) unavailability of multidisciplinary approach to understand the cancer metabolism that can directly or indirectly relate to the root of the pathological gene regulation.

4. Future Prospects for Exploiting the Altered Cancer Metabolism as Drug Target and Biomarker

The altered cancer metabolism offers obvious drug targets and is a potential source of biomarkers. It is a bit strange that cancer cells addiction to glutamine (known since 1956) and necessity for exporting lactate (known since Warburg’s discovery 1923) has not been subject to clinical trials until 2018 with CB- 839 and AZD-3965, respectively. Clearly, there is still a lot of drug discovery to be made in the well-known areas of unique cancer metabolism.
Life cannot sustain too large deviations from an ideal metabolism. Homeostatic mechanisms maintain this ideal metabolism during cell division and under conditions of changes in nutrient and oxygen supply. The differences that we can expect to find when comparing cancer cells and normal cells is how this homeostasis is maintained through altered fluxes and alternative metabolic routes. Identifying differences further away from central aspects such as aerobic glycolysis and glutamine addiction may provide better therapeutic windows. The homeostatic mechanisms complicate discovery as quantitative differences may not be apparent and, to address this, global flux probing methods are being developed [42,43,150,151,152]. From a basic understanding of cancer cell nutrient requirements, it could be worth revisiting classical experiments [34,36] investigating cellular needs with more powerful metabolomics and flux techniques available today.
The quest for metabolic biomarkers of cancer has been intense over the last decade. One possible explanation to the lack of metabolic biomarker panels being evaluated in clinical trials so far is that many of the proposed biomarkers lack clear and proven mechanistic link to the cancer metabolism. Identification of metabolic blood biomarkers directly in patient samples is apparently difficult. This can be rationalized by considering that tumors are small relative to the rest of the body and that a unique cancer metabolic profile leaking out into the blood easily can get masked by the same metabolites leaking out from normal cells of slightly different proportions. The unique tumor profile will become diluted in the blood. It is also conceivable that innate immune responses further masks tumor specificity. However, if we look how metabolic biomarkers for other diseases were developed, it appears as if the biomarker and its detection were developed from known pathological biochemistry. For example, the discovery of Helicobacter pylori expressing urease [153] and the subsequent exploitation of urease activity for developing a stable isotope labeled urea test and for detecting the labeled CO2 arising from the urease activity [154]. With the powerful analytical technology available today, cancer biologists should join with analytical chemists to explore strategies for employing well characterized cancer biochemistry for diagnosis. It would be unfortunate to have a scenario like for phenylketonuria (PKU) diagnosis for which 30 years passed between discovery of the pathological biochemistry and a reliable diagnostic test [155,156].

The Kempe Foundation is acknowledged for financial support (JCK-1621). 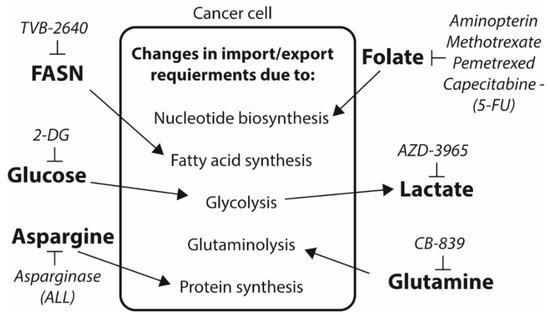 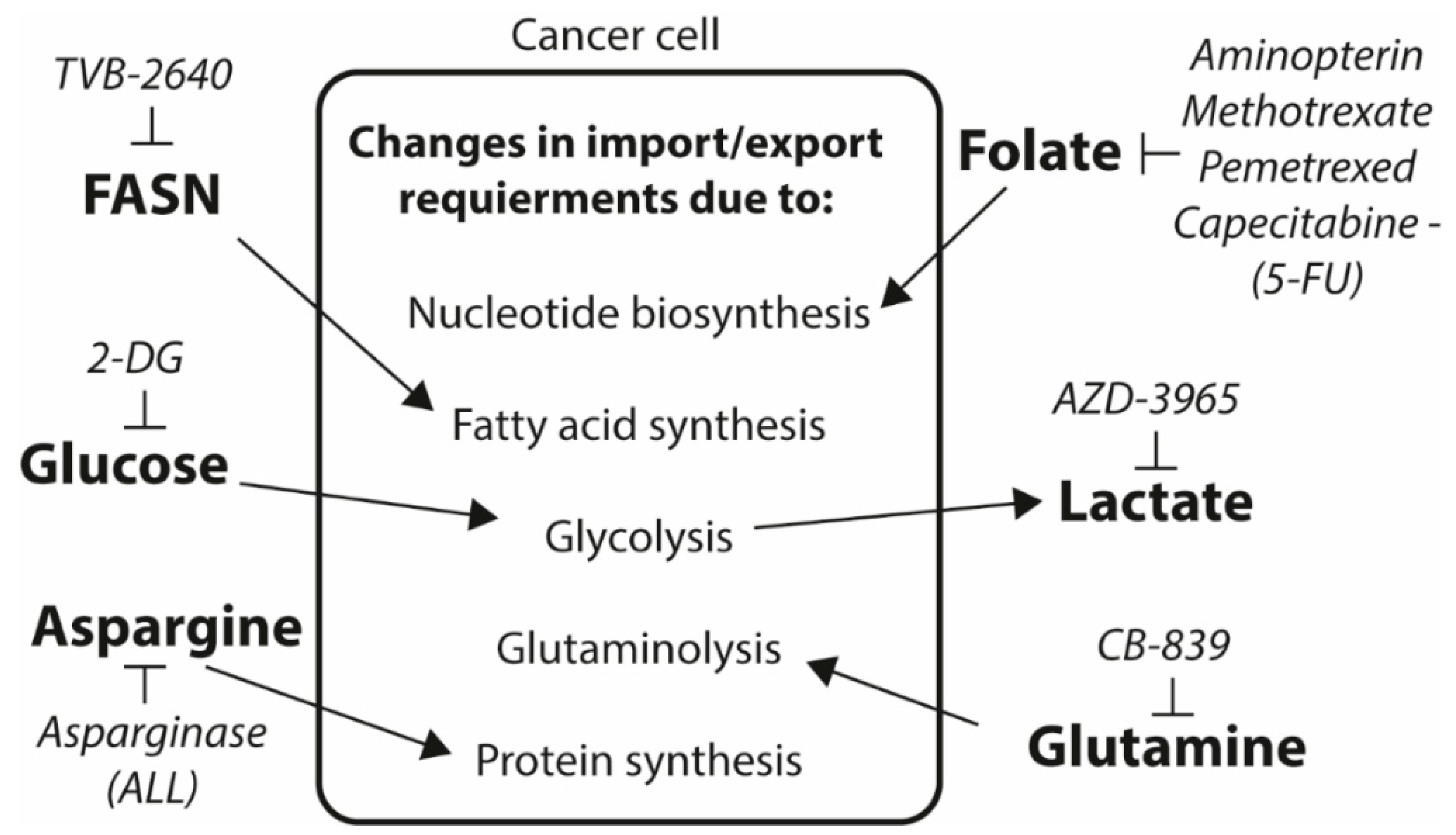