Vitamin K: Double Bonds beyond Coagulation Insights into Differences between Vitamin K1 and K2 in Health and Disease
Previous Article in Special Issue

Background: Vanin-1 is a novel acute kidney injury (AKI) biomarker that has not been clinically investigated as a biomarker for obstructive nephropathy. This study investigated the diagnostic value of vanin-1 as a biomarker for adult obstructive nephropathy by comparing it to existing AKI biomarkers. Methods: A total of 49 patients, 21 controls, and 28 hydronephrosis (HN) cases were assessed. AKI biomarkers in bladder (BL) urine and renal pelvic (RP) urine in the HN group were compared to each BL marker in the control group. In a subgroup of cases receiving interventions for obstructive nephropathy, the BL values of each biomarker were assessed after the intervention. Results: RP vanin-1 levels were significantly higher while BL vanin-1 levels were marginally higher in the HN group than in the control group. The area under the receiver operating characteristics curve values for RP and BL vanin-1 were 0.9778 and 0.6386, respectively. In multivariate analyses, BL vanin-1 and N-acetyl-β-D-glucosaminidase (NAG), but not kidney injury molecule-1 (KIM-1) or neutrophil gelatinase-associated lipocalin (NGAL), were independent factors for predicting the presence of HN. In cases receiving interventions, vanin-1 decreased significantly from 1 week after the intervention in cases of moderate to severe obstructive nephropathy compared to RP values at baseline. Conclusion: Urinary vanin-1 is a useful biomarker to detect and monitor the clinical course of obstructive nephropathy. View Full-Text
Keywords: vanin-1; NGAL; KIM-1; NAG; hydronephrosis; urinary biomarker vanin-1; NGAL; KIM-1; NAG; hydronephrosis; urinary biomarker
►▼ Show Figures 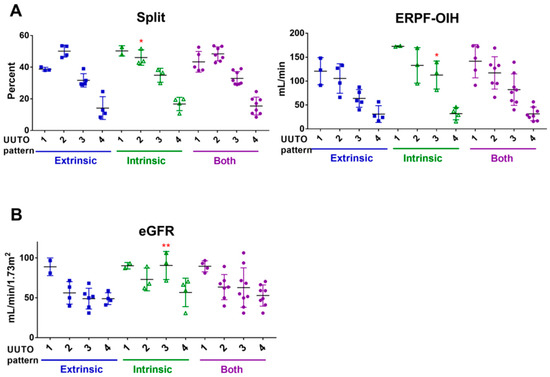