The Use of Lupin as a Source of Protein in Animal Feeding: Genomic Tools and Breeding Approaches
Previous Article in Journal

Effect of Trichoderma velutinum and Rhizoctonia solani on the Metabolome of Bean Plants (Phaseolus vulgaris L.)

The common bean (Phaseolus vulgaris L.) is one of the most important food legume crops worldwide that is affected by phytopathogenic fungi such as Rhizoctonia solani. Biological control represents an effective alternative method for the use of conventional synthetic chemical pesticides for crop protection. Trichoderma spp. have been successfully used in agriculture both to control fungal diseases and to promote plant growth. The response of the plant to the invasion of fungi activates defensive resistance responses by inducing the expression of genes and producing secondary metabolites. The purpose of this work was to analyze the changes in the bean metabolome that occur during its interaction with pathogenic (R. solani) and antagonistic (T. velutinum) fungi. In this work, 216 compounds were characterized by liquid chromatography mass spectrometry (LC-MS) analysis but only 36 were noted as significantly different in the interaction in comparison to control plants and they were tentatively characterized. These compounds were classified as: two amino acids, three peptides, one carbohydrate, one glycoside, one fatty acid, two lipids, 17 flavonoids, four phenols and four terpenes. This work is the first attempt to determine how the presence of T. velutinum and/or R. solani affect the defense response of bean plants using untargeted metabolomics analysis. View Full-Text
Keywords: metabolomics analysis; bean; Phaseolus vulgaris; Trichoderma; Rhizoctonia solani; phytoalexins metabolomics analysis; bean; Phaseolus vulgaris; Trichoderma; Rhizoctonia solani; phytoalexins
►▼ Show Figures 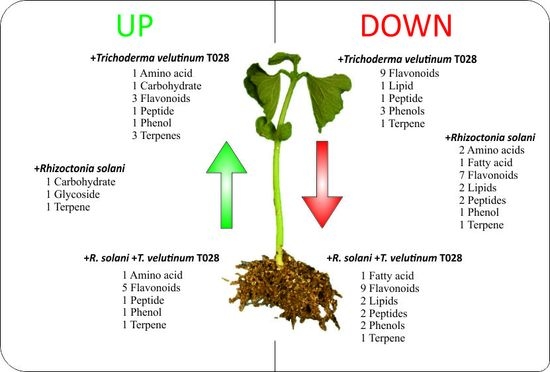