Roles of the INO80 and SWR1 Chromatin Remodeling Complexes in Plants

A high degree of developmental plasticity enables plants to adapt to continuous, often unfavorable and unpredictable changes in their environment. At the molecular level, adaptive advantages for plants are primarily provided by epigenetic machinery including DNA methylation, histone modifications, and the activity of noncoding RNA molecules. Using a mass spectrometry-based proteomic approach, we examined the levels of acetylated histone peptide forms in Arabidopsis plants with a loss of function of histone deacetylase 6 (HDA6), and in plants germinated in the presence of HDA inhibitors trichostatin A (TSA) and sodium butyrate (NaB). Our analyses revealed particular lysine sites at histone sequences targeted by the HDA6 enzyme, and by TSA- and NaB-sensitive HDAs. Compared with plants exposed to drugs, more dramatic changes in the overall profiles of histone post-translational modifications were identified in hda6 mutants. However, loss of HDA6 was not sufficient by itself to induce hyperacetylation to the maximum degree, implying complementary activities of other HDAs. In contrast to hda6 mutants that did not exhibit any obvious phenotypic defects, the phenotypes of seedlings exposed to HDA inhibitors were markedly affected, showing that the effect of these drugs on early plant development is not limited to the modulation of histone acetylation levels. View Full-Text
Keywords: Arabidopsis thaliana; epigenetics; histone; mass spectrometry; post-translational modifications; sodium butyrate; trichostatin A Arabidopsis thaliana; epigenetics; histone; mass spectrometry; post-translational modifications; sodium butyrate; trichostatin A
►▼ Show Figures 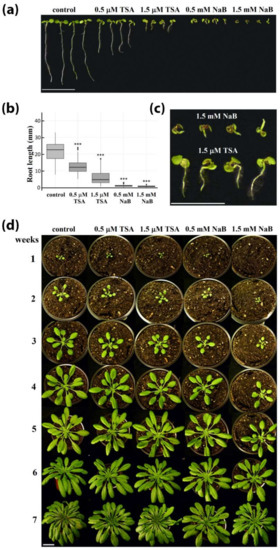