Resistance to Cereal Cyst Nematodes in Wheat and Barley: An Emphasis on Classical and Modern Approaches
Previous Article in Special Issue

Psyllium is a widely used treatment for constipation. It traps water in the intestine increasing stool water, easing defaecation and altering the colonic environment. We aimed to assess the impact of psyllium on faecal microbiota, whose key role in gut physiology is being increasingly recognised. We performed two randomised, placebo-controlled, double-blinded trials comparing 7 days of psyllium with a placebo (maltodextrin) in 8 healthy volunteers and 16 constipated patients respectively. We measured the patients’ gastrointestnal (GI) transit, faecal water content, short-chain fatty acid (SCFA) and the stool microbiota composition. While psyllium supplement had a small but significant effect on the microbial composition of healthy adults (increasing Veillonella and decreasing Subdoligranulum), in constipated subjects there were greater effects on the microbial composition (increased Lachnospira, Faecalibacterium, Phascolarctobacterium, Veillonella and Sutterella and decreased uncultured Coriobacteria and Christensenella) and alterations in the levels of acetate and propionate. We found several taxa to be associated with altered GI transit, SCFAs and faecal water content in these patients. Significant increases in three genera known to produce butyrate, Lachnospira, Roseburia and Faecalibacterium, correlated with increased faecal water. In summary, psyllium supplementation increased stool water and this was associated with significant changes in microbiota, most marked in constipated patients. View Full-Text
Keywords: prebiotics; microbiome; ispaghula; constipation; transit prebiotics; microbiome; ispaghula; constipation; transit
►▼ Show Figures 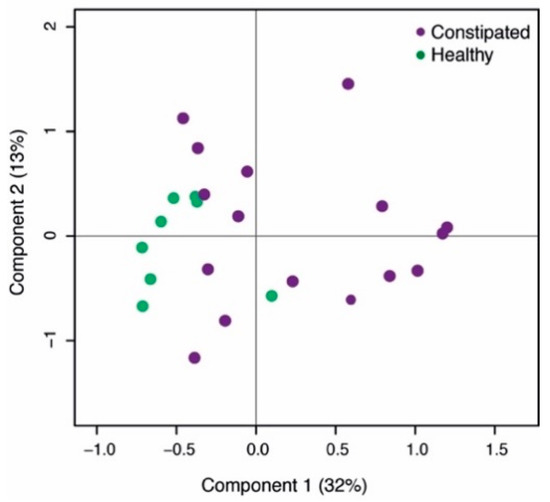