Monocytes are pivotal cells in inflammatory joint diseases. We aimed to determine the effect of TNF-α inhibitors (TNFi) on peripheral blood monocyte subpopulations and their activation in ankylosing spondylitis (AS) and rheumatoid arthritis (RA) patients with high disease activity. To address this, we studied 50 (32 AS, 18 RA) patients with highly active disease with no prior history of TNFi use who were recruited and assigned to TNFi or placebo treatment for 12 weeks. Cytometric and clinical assessment was determined at baseline, four, and 12 weeks after initiation of TNFi treatment. We observed that treatment with TNFi led to a significant decrease in CD14hiCD16− monocytes in comparison to placebo, while circulating CD14dimCD16+ monocytes significantly increased. The TNFi-induced monocyte subset shifts were similar in RA and AS patients. While the percentage of CD14dimCD16+ monocytes increased, expression of CD11b and CD11c integrins on their surface was significantly reduced by TNFi. Additionally, CD45RA+ cells were more frequent. The shift towards nonclassical CD14dimCD16+ monocytes in peripheral blood due to TNFi treatment was seen in both AS and RA. This may reflect reduced recruitment of these cells to sites of inflammation due to lower inflammatory burden, which is associated with decreased disease activity.
Keywords: rheumatoid arthritis; ankylosing spondylitis; tumor necrosis factor inhibitor; disease activity; monocytes rheumatoid arthritis; ankylosing spondylitis; tumor necrosis factor inhibitor; disease activity; monocytes

The significance of peripheral blood monocytes is increasingly recognized in the pathogenesis of inflammatory joint diseases, such as rheumatoid arthritis (RA) and ankylosing spondylitis (AS) [1,2,3]. Monocytes are divided into the predominant classical CD14hiCD16− population and CD16+ monocytes, which branch into intermediate CD14hiCD16+ and nonclassical CD14dimCD16+ subsets [4]. Treatment of arthritis aims to reduce tissue infiltrating monocytes, which are osteoclast precursors and sources of inflammatory cytokines [5]. CD16+ cells are increasingly present in both blood and synovium of RA patients, where they may express autoantigens correlating with the severity of joint damage [6]. Puchner et al. recently demonstrated in murine models that nonclassical monocytes are crucial in the development of arthritis, although literature also attributes a role for classical subsets in osteoclast differentiation and joint damage [7,8]. Monocyte-derived TNF-α may be a signaling molecule involved in this process and is a hallmark of inflammation [9]. When encountering immune complexes, nonclassical monocytes are selective producers of TNF-α and IL-1β [10] which have been investigated in numerous clinical trials as an effective method to reduce inflammatory disease activity [11,12]. CD16+ monocytes may fail to cross endothelial barriers at the onset of inflammation, while differentiating in peripheral blood and tissues due to perturbed cytokine production from classical CD14hiCD16− subsets [13]. Therefore, monocyte adhesion and activation markers are other emerging fields of interest. CD11b is involved in migration and adhesion. Polymorphisms of CD11b are associated with systemic lupus erythematosus and other immune complex mediated diseases [14]. Murine studies of targeted anti-CD11b antibodies demonstrate a suppressive effect on processes shaping arthritis [5]. To the best of our knowledge, peripheral blood monocyte heterogeneity has not been extensively studied in patients with RA or AS receiving anti-TNF-α treatment. Therefore, our goal was to evaluate the effect of anti-TNF-α treatment on peripheral blood monocyte subpopulations, their functional properties, and to compare the effect of treatment in high disease activity, and in conventional treatment-refractory AS and RA patients.

Fifty patients were assigned to TNFi (n = 38) or placebo (n = 12) groups. Clinical characteristics of recruited patients did not show any baseline differences between groups according to factors presented in Table 1.

2.1. Effects of TNFi on Disease Activity

Disease activity at baseline and after 12 weeks of therapy was assessed. A significant decrease in disease activity was observed in the TNF-α inhibition arm compared to placebo. Respective parameters for RA and AS, namely DAS28-CRP and BASDAI, significantly decreased after 12 weeks of anti-TNF-α treatment but not in the placebo group. BASDAI index decreased after treatment by 3.57 points and increased by 0.36 points in the placebo group (p < 0.001). DAS28 index decreased by 2.07 points for TNFi and 0.61 for the placebo group (p < 0.001) (Figure S1).

2.2. Effects of TNFi on Monocyte Subpopulations

Monocyte subpopulations did not differ at baseline (t0) between the TNFi and placebo group (Figure 1B). We then investigated changes in the frequency of individual monocyte subpopulations during TNFi treatment, when compared to the placebo group. Patients treated with TNFi had no change in frequency of total monocytes in PBMC (delta t2−t0) as compared to placebo-treated patients. TNFi led to an increase of the nonclassical (CD14dimCD16+) monocyte fraction and a decrease of classical (CD14hiCD16−) subsets in comparison to placebo (Figure 2A,B). The same trend was observed for absolute monocyte numbers per microliter (data not shown). As this effect may be related to lower recruitment of inflammatory cells to the synovium, we studied the expression of monocyte markers involved in this process. Indeed, we observed reduced levels of CD11b and CD11c integrins on the surface of CD14dimCD16+ cells, which appeared to be most affected by TNFi treatment (Table 2 and Table 3). A higher fraction of CD45RA+ monocytes was observed in all monocyte subpopulations in the TNFi group (Table 3). Other monocyte subpopulations (CD14hi and CD14dimCD16− cells) showed more discrete but consistent reductions of selected markers while having a tendency towards increased CD45RA and HLA-DR (Table 3).

2.3. Monocyte Responses to TNFi between AS and RA Patients

Fifty patients with chronic inflammatory arthritis were recruited into the study; 32 were diagnosed with AS and 18 with RA. Diagnosis of AS was based on the modified New York criteria [33], while RA diagnosis was based upon ACR/EULAR 2010 criteria [34]. All patients had no prior history of anti-TNF-α treatment. At baseline, all patients had high disease activity. In AS patients this was defined as Bath Ankylosing Spondylitis Disease Activity Index (BASDAI) score of ≥4 in 2 assessments with a 12-week interval, while in RA patients this was defined as a 28-joint Disease Activity Score C-reactive protein (DAS28-CRP) of >5.1 measured twice with a 1-month interval. AS patients were recruited if they had an ineffective response to treatment with two nonsteroidal anti-inflammatory drugs (NSAIDs) consecutively for 3 months, at the maximum recommended or tolerated dose. RA patients treated ineffectively with 2 classical synthetic disease-modifying antirheumatic drugs (csDMARDs) for 6 months each, including the maximum recommended or tolerated doses of methotrexate for at least 3 months, were included. These criteria were in accordance with national reimbursement guidelines for biologic agents. Patients with a history of hepatitis, pneumonia, pyelonephritis within the last 3 months, opportunistic infection within the last 2 months, joint infection within the last year, neoplasm within the last 5 years, or pre-cancer stage were excluded from the study. Thirty-eight patients received anti-TNF-α treatment (24 AS, 14 RA), while 12 (8 AS, 4 RA) were given placebo. Our study originally aimed to recruit patients in a 3:1 design. Reimbursement availability for TNF-α inhibitor therapy at patient recruitment, following the fulfilment of inclusion criteria, was the determinant of patient allocation into either the active TNFi treatment arm or “waiting arm”, where they received placebo. Saline was used as placebo. We were unable to recruit a larger study group due to strictly defined eligibility, and limited resources. Clinical and laboratory investigators were blinded, and were not aware of the treatment received by patients. TNFi and placebo were administered by study nurses, who remained unblinded throughout the study, though they did not participate in any other aspects of the investigation. Patients received anti-TNF-α agents (Table 1) in the following dosage for 12 weeks: etanercept 50 mg s.c. weekly, adalimumab 40 mg s.c. every 2 weeks, certolizumab 400 mg s.c. every 2 weeks for a month, followed by 200 mg every 2 weeks, infliximab 3 mg/kg (RA) or 5 mg/kg (AS) i.v. 2 and 6 weeks from the first admission, then every 8 weeks. Baseline dosage of csDMARDs, glucocorticoids and NSAIDs were maintained throughout the study period. The study was conducted in accordance with the Declaration of Helsinki and Good Clinical Practice guidelines. The investigation protocol was approved by the Bioethics Committee of the Regional Chamber of Physicians in Krakow, Poland—investigation number 77/KBL/OIL/2013. Prior to enrolment, written consent was obtained from all patients.

As described previously [19], peripheral blood mononuclear cells (PBMC) were isolated on the day of collection from peripheral EDTA-anticoagulated blood by density gradient centrifugation with LSM 1077 (Lymphocyte Separation Medium, PAA Laboratories GmbH, Cölbe, Austria). Cells (5.0 x 105) were stained for 20 min on ice with fluorochrome-conjugated monoclonal antibodies (anti-CD14-APC-H7, anti-CD16-PE, anti-HLA-DR-PE-Cy7, anti-CD45RA-FITC, anti-CD11c-APC, and anti-CD11b-Pacific Blue; Becton Dickinson (BD) Biosciences—Pharmingen, San Diego, CA, USA) and then washed twice with phosphate buffered saline (PBS) containing 1% heat inactivated fetal bovine serum (FBS) (GIBCO). The cells were processed in the FACSCanto II flow cytometer (BD Biosciences, San Jose, CA, USA) and then analyzed with FlowJo software (TreeStar Inc., Ashland, OR, USA). Cells were gated in an SSC (side scatter)/FSC (forward scatter) plot with the scatter gate for monocytes partially extending into lymphocytes. The cells containing all monocytes and a part of the lymphocyte population were then gated in an HLA-DR/CD14 plot to exclude HLADR-negative natural killer cells (which would otherwise contaminate the CD14dimCD16+ subpopulation) and finally were analyzed for CD14 and CD16 expression [35]. Monocyte subsets were defined according to the expression of CD16 (Fcγ receptor type III) and CD14 (lipopolysaccharide receptor) as classical monocytes (CD14hiCD16−), intermediate monocytes (CD14hiCD16+), and nonclassical monocytes (CD14dimCD16+) [4] (Figure 1A). The expression of β2-integrins (CD11b and CD11c), CD45RA, and HLA-DR on monocyte subsets was quantified. Results are presented as percentages and mean fluorescence intensity (MFI).

We would like to thank the physicians and nurses from both Rheumatology Departments of the J. Dietl Specialist Hospital in Krakow, Poland, for aiding in the recruitment process and conducting the study. Additionally, we would like to thank Kevin Luc, MD for English language editing and reviewing of this manuscript. 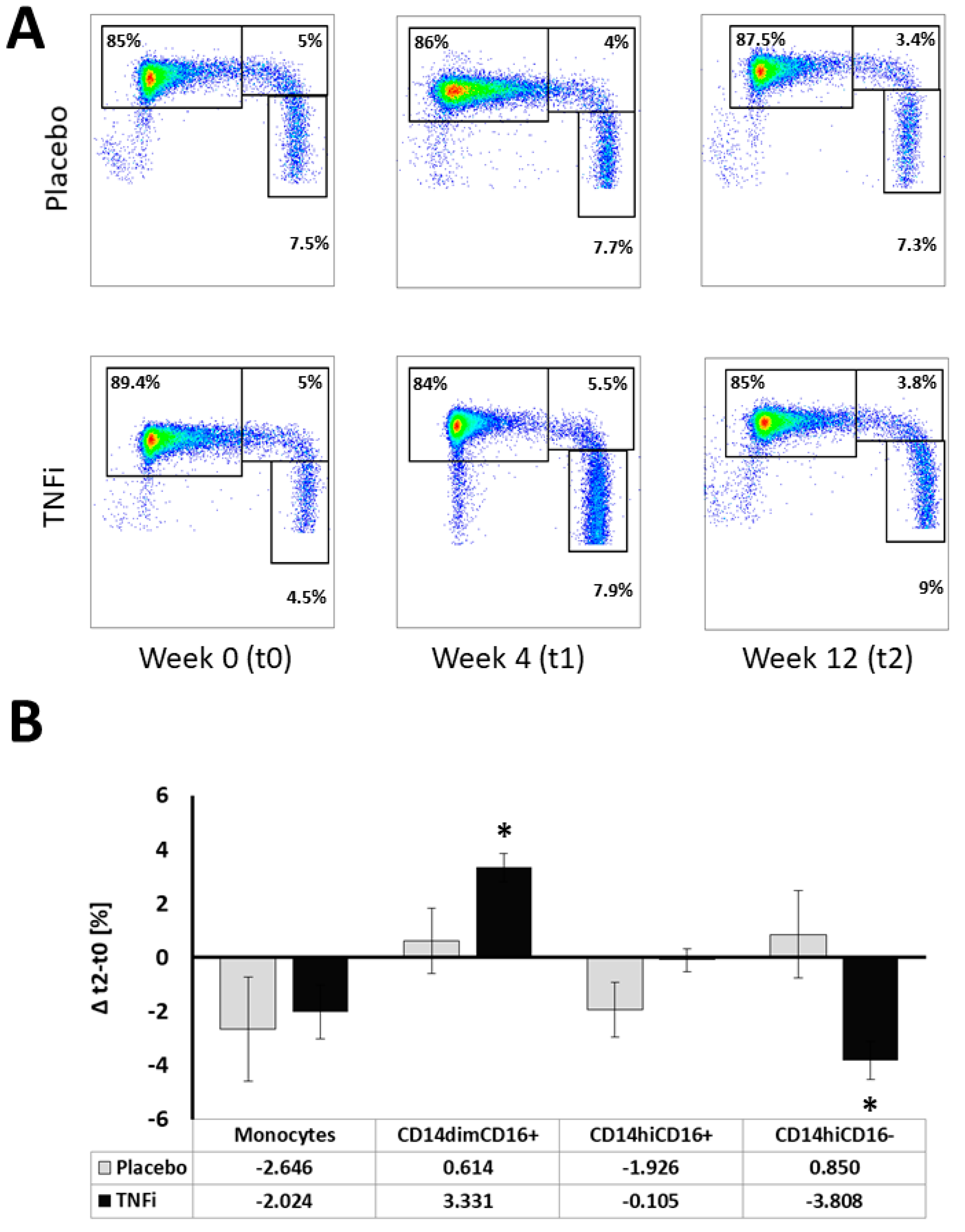 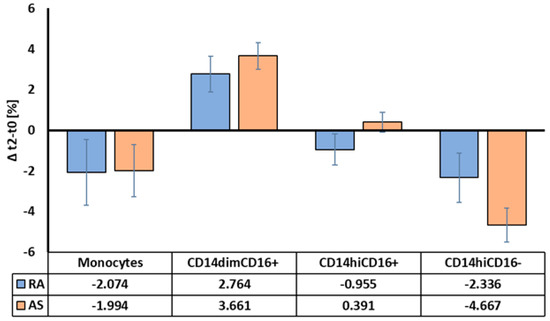