PSMA-Targeting Positron Emission Agents for Imaging Solid Tumors Other Than Non-Prostate Carcinoma: A Systematic Review
Next Article in Special Issue

Probiotics Can Cure Oral Aphthous-Like Ulcers in Inflammatory Bowel Disease Patients: A Review of the Literature and a Working Hypothesis
Previous Article in Journal

Hydrogen Ion Dynamics of Cancer and a New Molecular, Biochemical and Metabolic Approach to the Etiopathogenesis and Treatment of Brain Malignancies

The Systemic–Evolutionary Theory of the Origin of Cancer (SETOC): A New Interpretative Model of Cancer as a Complex Biological System

The Systemic–Evolutionary Theory of Cancer (SETOC) is a recently proposed theory based on two important concepts: (i) Evolution, understood as a process of cooperation and symbiosis (Margulian-like), and (ii) The system, in terms of the integration of the various cellular components, so that the whole is greater than the sum of the parts, as in any complex system. The SETOC posits that cancer is generated by the de-emergence of the “eukaryotic cell system” and by the re-emergence of cellular subsystems such as archaea-like (genetic information) and/or prokaryotic-like (mitochondria) subsystems, featuring uncoordinated behaviors. One of the consequences is a sort of “cellular regression” towards ancestral or atavistic biological functions or behaviors similar to those of protists or unicellular organisms in general. This de-emergence is caused by the progressive breakdown of the endosymbiotic cellular subsystem integration (mainly, information = nucleus and energy = mitochondria) as a consequence of long-term injuries. Known cancer-promoting factors, including inflammation, chronic fibrosis, and chronic degenerative processes, cause prolonged damage that leads to the breakdown or failure of this form of integration/endosymbiosis. In normal cells, the cellular “subsystems” must be fully integrated in order to maintain the differentiated state, and this integration is ensured by a constant energy intake. In contrast, when organ or tissue damage occurs, the constant energy intake declines, leading, over time, to energy shortage, failure of endosymbiosis, and the de-differentiated state observed in dysplasia and cancer. View Full-Text
Keywords: cancer theories; endosymbiosis; evolution; complex systems; emerging properties; atavism cancer theories; endosymbiosis; evolution; complex systems; emerging properties; atavism
►▼ Show Figures 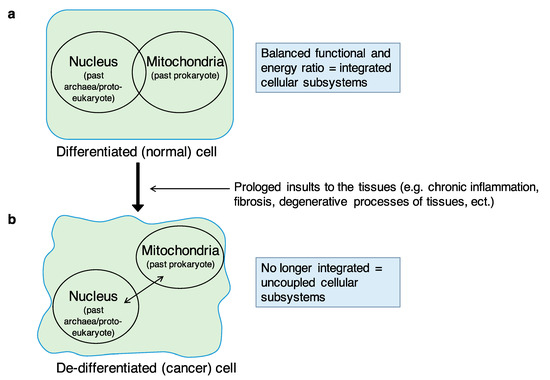 Mazzocca, A. The Systemic–Evolutionary Theory of the Origin of Cancer (SETOC): A New Interpretative Model of Cancer as a Complex Biological System. Int. J. Mol. Sci. 2019, 20, 4885.


Mazzocca A. The Systemic–Evolutionary Theory of the Origin of Cancer (SETOC): A New Interpretative Model of Cancer as a Complex Biological System. International Journal of Molecular Sciences. 2019; 20(19):4885.