This study suggests that two newly discovered variants in the MSH2 gene, which codes for a DNA mismatch repair (MMR) protein, can be associated with a high risk of breast cancer. While variants in the MSH2 gene are known to be linked with an elevated cancer risk, the MSH2 gene is not a part of the standard kit for testing patients for elevated breast cancer risk. Here we used the results of genetic testing of women diagnosed with breast cancer, but who did not have variants in BRCA1 and BRCA2 genes. Instead, the test identified four variants with unknown significance (VUS) in the MSH2 gene. Here, we carried in silico analysis to develop a classifier that can distinguish pathogenic from benign mutations in MSH2 genes taken from ClinVar. The classifier was then used to classify VUS in MSH2 genes, and two of them, p.Ala272Val and p.Met592Val, were predicted to be pathogenic mutations. These two mutations were found in women with breast cancer who did not have mutations in BRCA1 and BRCA2 genes, and thus they are suggested to be considered as new bio-markers for the early detection of elevated breast cancer risk. However, before this is done, an in vitro validation of mutation pathogenicity is needed and, moreover, the presence of these mutations should be demonstrated in a higher number of patients or in families with breast cancer history. View Full-Text
Keywords: MSH2; breast cancer; personalized medicine; early diagnostics; computational modeling; disease-causing mutations; variants MSH2; breast cancer; personalized medicine; early diagnostics; computational modeling; disease-causing mutations; variants
►▼ Show Figures 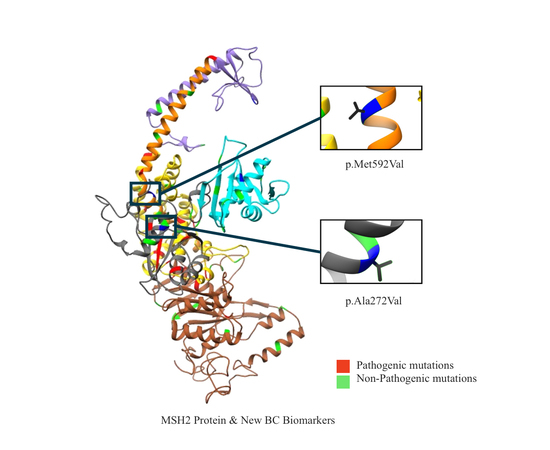