The Activation Status of the TGF-β Transducer Smad2 Is Associated with a Reduced Survival in Gastrointestinal Cancers: A Systematic Review and Meta-Analysis
Previous Article in Journal

Biochemistry of Copper Site Assembly in Heme-Copper Oxidases: A Theme with Variations

Nonalcoholic fatty liver disease (NAFLD) is an important health problem in Western society characterized by the excessive content of triacylglycerols in the cytoplasm of hepatocytes exceeding 5% of their volume [1,2]. NAFLD occurrence is strongly associated with obesity and type 2 diabetes [3]. Some obese individuals exhibit increased circulating levels of free fatty acids (FFAs) in plasma whose sources are either: unhealthy diet, augmented adipose tissue lipolysis, or de novo lipogenesis [4,5]. The elevated levels of FFAs reaching the liver override its oxidation capacity and are esterified mainly to triacylglycerol (TAG) and diacylglycerol (DAG) lipid fractions, which are accumulated in hepatocytes [6]. It is still unclear whether TAG deposition is the liver’s protective mechanism against lipotoxicity or is a culprit in NAFLD development [7]. Studies conducted by Listenberger et al. revealed that increased TAG accumulation during lipid oversupply state is a cellular defence against lipotoxic effects [8]. Although this lipid fraction may also be a source for other more biologically active lipids, such as DAG, which may cause insulin resistance development and NAFLD deterioration [5]. In our opinion more important is the fatty acid composition rather than the lipid species itself, which may influence the overall effect caused by lipids. It may explain why some obese patients do not develop insulin resistance and NAFLD [9]. Interestingly, fatty acids composition present in diet reflects TAG and DAG composition accumulated in the liver [10]. The Western style diet, which is rich in saturated fatty acids (SFA), leads to the deposition of mainly palmitic acid in different lipid fractions. However, the amount of other fatty acids is also important as it may indicate the direction of metabolic changes. The nervonic acid (NA; C 24:1), being a monounsaturated derivative of lignoceric acid, has been claimed to have beneficial effects on risk factors connected with obesity and diabetes [11,12]. As reported earlier, the content of this fatty acid was affected in peroxisomal disorders, diabetes, and undernourishment [13,14,15]. However, no information is available regarding the alteration in nervonic acid content during NAFLD development. The nervonic acid is considered to be a predicting factor for NAFLD occurrence and progression. The present study concerns the relationship between time dependent high fat feeding, NA content in various lipid fractions and NAFLD development. Such measurements are necessary to elucidate changes in liver metabolic routes and lipid fraction content during overnutrition, which may help to find new potential biomarkers associated with obesity and NAFLD.

2.2. Changes in the Plasma Lipid Concentrations

2.3. Changes in the Expression of Fatty Acid Transporters

2.4. Changes in the Expression of Proteins Directly Involved in Lipid Metabolism

2.5. Changes in the Nervonic Acid Concentration in the Liver and Plasma

2.6. Changes in the Elongation and Desaturation Ratio

The following experimental procedures were conducted on male Wistar rats (six rats in the each group, 100–150 g of initial body weight) kept in approved animal holding facilities (at 22 ± 2 °C, on a 12 h/12 h light–dark cycle, with unrestricted access to water and to commercial chow). The rats were randomly divided into two groups: (1) control receiving a standard chow diet, (2) HFD group fed ad libitum on a rodent diet rich in fatty acids (kcal distribution = 60% fat, 20% carbohydrate and 20% protein; Research Diet Inc., New Brunswick, NJ, USA, cat no. D12492). In our experiment we set two control groups receiving a standard diet: one at the 1st week and the second at the 5th week of the study. Because no significant changes between these control groups were observed in the same measurements, the results were referred to as one control group (0 week). The animals from control groups, as well as HFD fed groups, at the end of each experimental week (1, 2, 3, 4 and 5) (fasted overnight) were anaesthetized by intraperitoneal injection of pentobarbital in the dose of 80 mg/kg of body weight. Samples of the liver were excised, immediately frozen—clamped with aluminum tongs precooled in liquid nitrogen and stored in −80 °C until further analyses. Blood samples were collected through the inferior vena cava to heparinized tubes, centrifuged, and the plasma was separated. All experimental procedures and the number of animals were approved by the Ethics Committee on Animal Care at the Medical University of Bialystok (28 May 2008, approval number: 32/2008). Moreover, all methods used in our experiments were performed in accordance with the relevant guidelines and regulations.

Plasma and liver concentrations of the individual fatty acid methyl esters were extracted with a chloroform-methanol solution using the Folch [26] method and separated into free fatty acids (FFA), DAG, TAG, and sphingomyelin fractions by thin-layer chromatography (TLC) [27]. Subsequently, individual fatty acid fractions were methylated in 14% methanol solution in boron trifluoride and quantified according to the retention times of standards with the use of the gas-liquid chromatography procedure (GLC Hewlett-Packard, Palo Alto, CA, USA, 5890 Series II gas chromatography HP- innowax capillary column equipped with a flame ionization detector) as described previously in details [27]. Furthermore, based on fatty acid composition, we calculated the elongation ratio (18:0/16:0; 20:0/18:0; 22:0/20:0; 24:0/22:0), desaturation ratio (24:1/24:0), de novo lipogenesis ratio (16:0/18:2n-3), the activities of the n-3 (20:5 + 22:6)/18:3) and n-6 pathway (20:4/18:2 n-6) in the particular lipid fraction. The amount of FFA, DAG, TAG and sphingomyelin contents were estimated as the sum of the individual fatty acid species of the assessed fractions, and they were expressed in nanomoles per gram of tissue.

Samples of the liver (the same fragment of the lobe from each rat) were collected for histologic studies. They were fixed in 10% buffered formalin, and processed routinely for embedding in paraffin. Sections were cut at 4 µm in thickness and stained with hematoxylin–eosin (H + E). Lipid droplets in liver tissues were determined by Oil Red O staining. Freshly picked fragments of liver were placed in the Tissue-Tek® O.C.T.™ (Sakura Finetek, Alphen aan den Rijn, The Netherlands), then frozen at ™30 °C. The 7-μm thick sections were cut on the frozen microtome and placed on adhesive slides. The sections were incubated in propylene glycol for 2 min. and, subsequently, in Oil Red O solution for 6 min. Next, the tissue sections were differentiated in 85% propylene glycol for 1 min., rinsed twice in water and incubated in hematoxylin for 1–2 min. The sections were then rinsed in tap water by customary procedure and coversliped with an aqueous mounting medium. The results of staining were submitted for evaluation in an Olympus BX41 microscope with an Olympus DP12 camera (Hamburg, Germany) under a magnification of 200 × (20 × lens and 10 × eyepiece).
Hepatic steatosis, inflammation, and hepatocellular ballooning were assessed by four independent pathologists unaware of the type of experimental group. They scored NAFLD diagnosis using NAS (NAFLD activity score ranged totally from 0 to 8) [29] as the most popular grading and staging system consisting of three parts as follows:
a)  Steatosis
0 for < 5% of hepatocytes steatotic;
1 for 5–33% of hepatocytes steatotic;
2 for 34–66% of hepatocytes steatotic;
3 for >66% of hepatocytes steatotic.
b)  Hepatocyte ballooning
0 for none balloon hepatocytes;
1 for few balloon hepatocytes;
2 for many balloon hepatocytes.
c)  Inflammation
0 for none inflammatory foci
1 for 1–2 inflammatory foci per ×20 field;
2 for 2–4 inflammatory foci per ×20 field;
3 for >4 inflammatory foci per ×20 field.
A score of >4 with steatosis and hepatocyte ballooning was considered as NAFLD.

The data are expressed as the mean and standard deviation. The assumptions of the methods used in our analysis, that is normality of the data distribution (Shapiro-Wilk test) and homogeneity of the variance (Bartlett’s test), were checked. Statistical differences were determined based on the results of one-way ANOVA followed by an appropriate post-hoc test (i.e. pairwise Student’s t-test) using GraphPad Prism 7 (San Diego, CA, USA). p < 0.05 was accepted as statistically significant in all cases.

K.K.-N. and E.H.-S. were responsible for the conception and design of the study, analysis and interpretation of data, design of the article and drafting the article. K.B., I.K., P.B. and B.Ł. were involved in experiment conduction. A.C. and K.K.-N. were responsible for analysis and interpretation of data and revised the manuscript critically. All authors gave final approval.

This work was supported by the Medical University of Bialystok grant number: N/ST/ZB/17/010/1118. 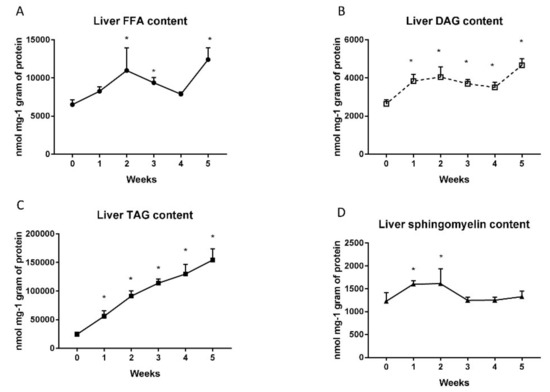 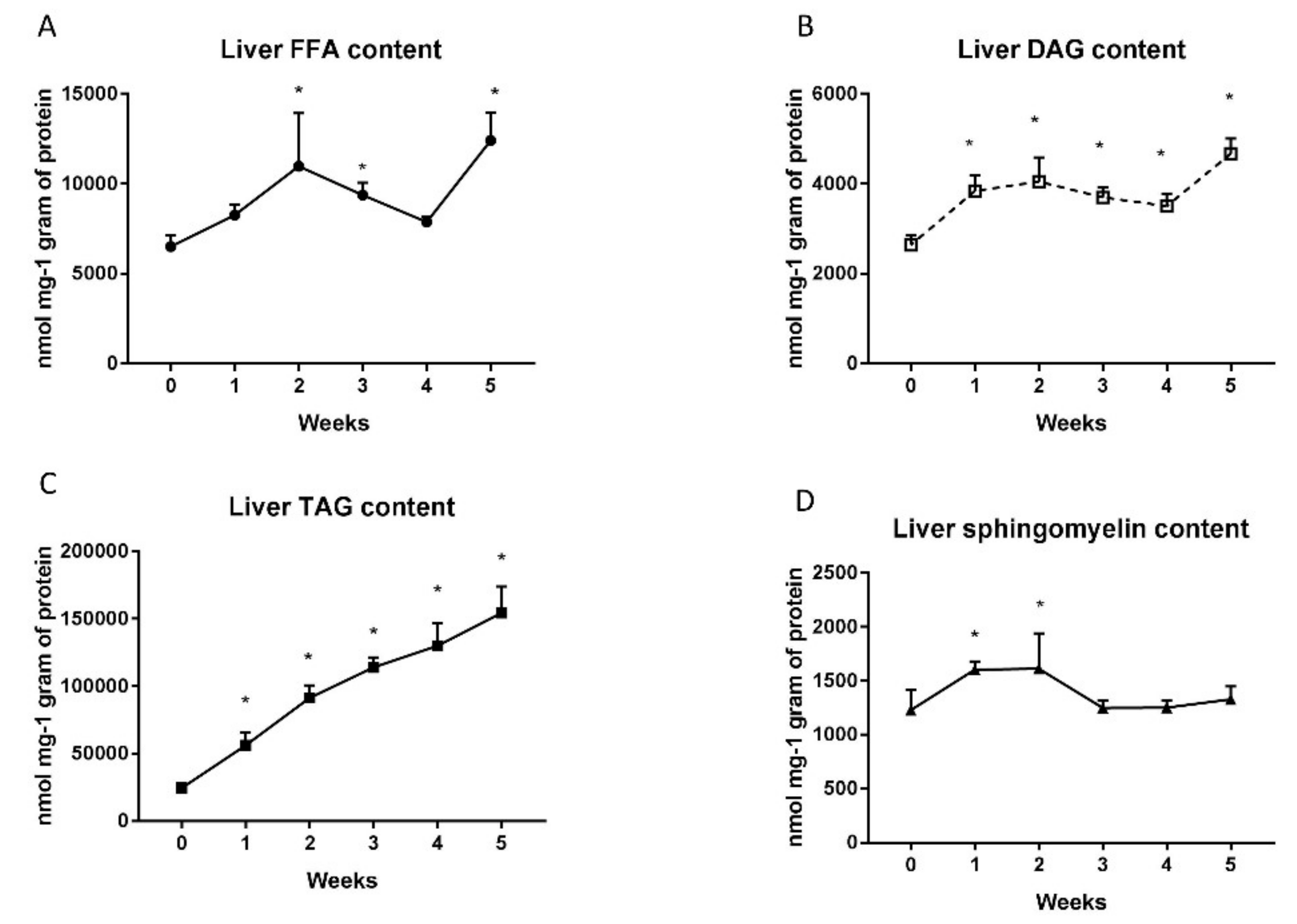 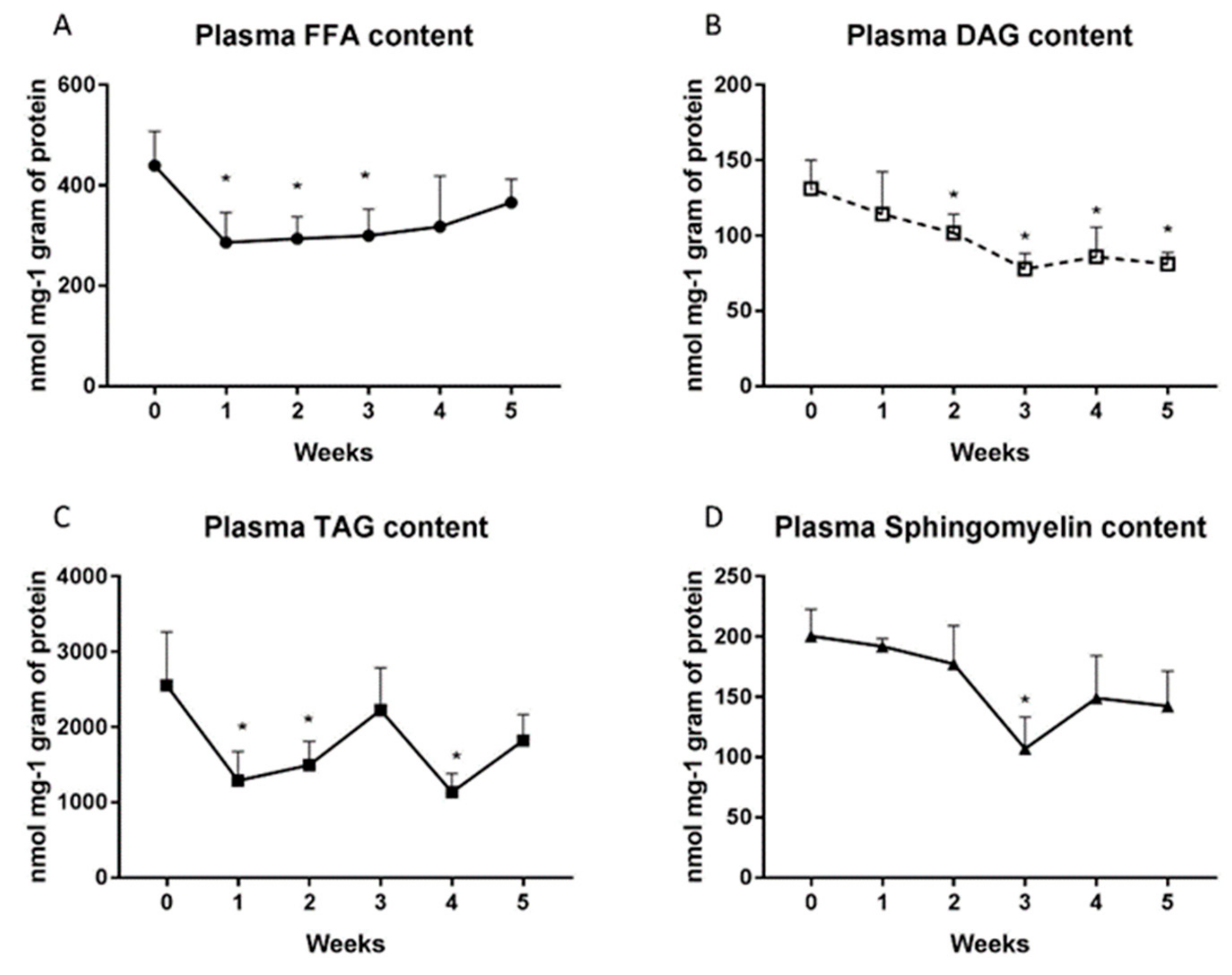 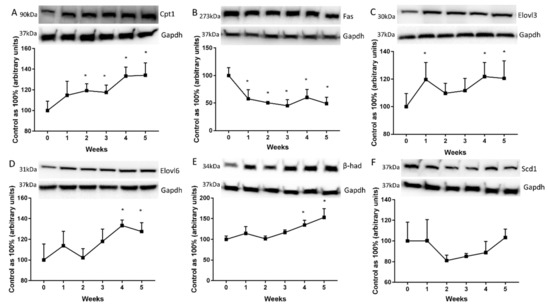 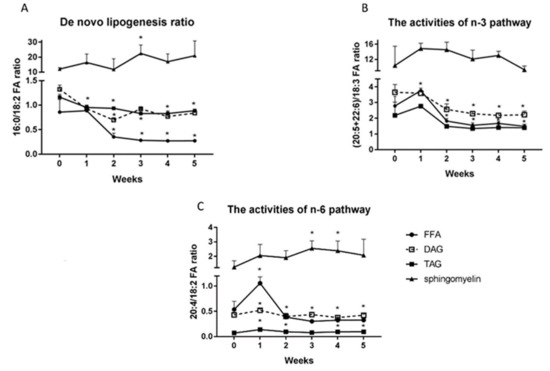 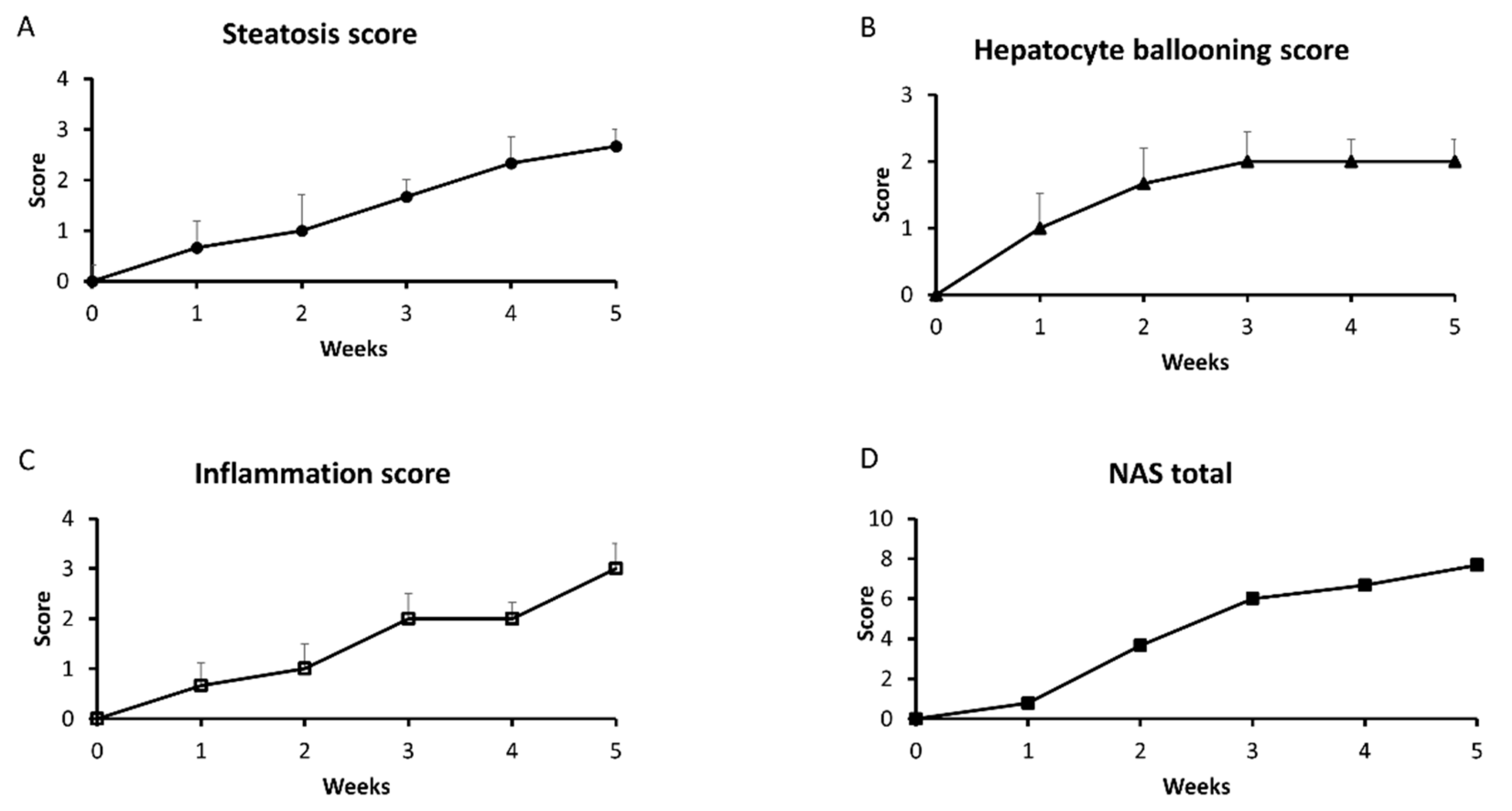