Function of Green Tea Catechins in the Brain: Epigallocatechin Gallate and its Metabolites

Over the last three decades, green tea has been studied for its beneficial effects, including anti-cancer, anti-obesity, anti-diabetes, anti-inflammatory, and neuroprotective effects. At present, a number of studies that have employed animal, human and cell cultures support the potential neuroprotective effects of green tea catechins against neurological disorders. However, the concentration of (−)-epigallocatechin gallate (EGCG) in systemic circulation is very low and EGCG disappears within several hours. EGCG undergoes microbial degradation in the small intestine and later in the large intestine, resulting in the formation of various microbial ring-fission metabolites which are detectable in the plasma and urine as free and conjugated forms. Recently, in vitro experiments suggested that EGCG and its metabolites could reach the brain parenchyma through the blood–brain barrier and induce neuritogenesis. These results suggest that metabolites of EGCG may play an important role, alongside the beneficial activities of EGCG, in reducing neurodegenerative diseases. In this review, we discuss the function of EGCG and its microbial ring-fission metabolites in the brain in suppressing brain dysfunction. Other possible actions of EGCG metabolites will also be discussed. View Full-Text
Keywords: blood–brain barrier; catechin; cognition; epigallocatechin gallate; green tea; microbiota; 5-(3,5-dihydroxyphenyl)-γ-valerolactone blood–brain barrier; catechin; cognition; epigallocatechin gallate; green tea; microbiota; 5-(3,5-dihydroxyphenyl)-γ-valerolactone
►▼ Show Figures 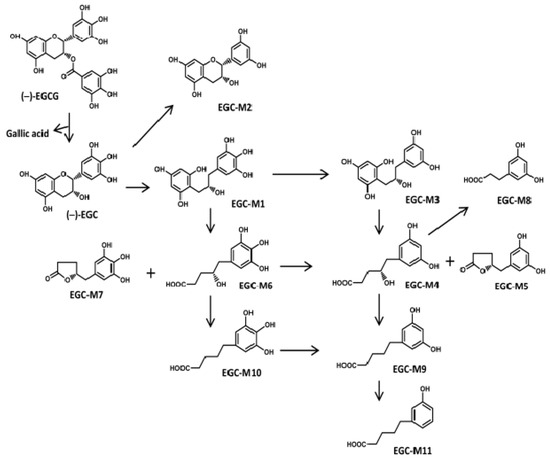