The NLRP3 Inflammasome: An Overview of Mechanisms of Activation and Regulation
Previous Article in Journal

Drought adversely affects crop growth and yields. The cloning and characterization of drought- or abscisic acid (ABA)-inducible promoters is of great significance for their utilization in the genetic improvement of crop resistance. Our previous studies have shown that maize sulfite oxidase (SO) has a sulfite-oxidizing function and is involved in the drought stress response. However, the promoter of the maize SO gene has not yet been characterized. In this study, the promoter (ZmSOPro, 1194 bp upstream region of the translation initiation site) was isolated from the maize genome. The in-silico analysis of the ZmSOPro promoter identified several cis-elements responsive to the phytohormone ABA and drought stress such as ABA-responsive element (ABRE) and MYB binding site (MBS), besides a number of core cis-acting elements, such as TATA-box and CAAT-box. A 5′ RACE (rapid amplification of cDNA ends) assay identified an adenine residue as the transcription start site of the ZmSO. The ZmSOPro activity was detected by β-glucuronidase (GUS) staining at nearly all developmental stages and in most plant organs, except for the roots in transgenic Arabidopsis. Moreover, its activity was significantly induced by ABA and drought stress. The 5′-deletion mutant analysis of the ZmSOPro in tobacco plants revealed that a 119-bp fragment in the ZmSOPro (upstream of the transcription start site) is a minimal region, which is required for its high-level expression. Moreover, the minimal ZmSOPro was significantly activated by ABA or drought stress in transgenic plants. Further mutant analysis indicated that the MBS element in the minimal ZmSOPro region (119 bp upstream of the transcription start site) is responsible for ABA and drought-stress induced expression. These results improve our understanding of the transcriptional regulation mechanism of the ZmSO gene, and the characterized 119-bp promoter fragment could be an ideal candidate for drought-tolerant gene engineering in both monocot and dicot crops. View Full-Text
Keywords: maize; sulfite oxidase; promoter; drought; transcriptional regulation maize; sulfite oxidase; promoter; drought; transcriptional regulation
►▼ Show Figures 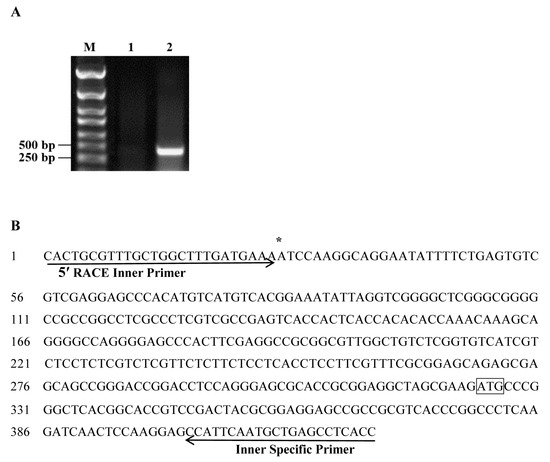