The Role of Nitric Oxide, ADMA, and Homocysteine in The Etiopathogenesis of Preeclampsia—Review
Next Article in Special Issue

Signal Exchange through Extracellular Vesicles in Neuromuscular Junction Establishment and Maintenance: From Physiology to Pathology
Previous Article in Journal

Extracellular vesicles (EVs), including exosomes, microvesicles, and apoptotic bodies, are cell-derived membranous structures that were originally catalogued as a way of releasing cellular waste products. Since the discovery of their function in intercellular communication as carriers of proteins, lipids, and DNA and RNA molecules, numerous therapeutic approaches have focused on the use of EVs, in part because of their minimized risk compared to cell-based therapies. The skin is the organ with the largest surface in the body. Besides the importance of its body barrier function, much attention has been paid to the skin in regenerative medicine because of its cosmetic aspect, which is closely related to disorders affecting pigmentation and the presence or absence of hair follicles. The use of exosomes in therapeutic approaches for cutaneous wound healing has been reported and is briefly reviewed here. However, less attention has been paid to emerging interest in the potential capacity of EVs as modulators of hair follicle dynamics. Hair follicles are skin appendices that mainly comprise an epidermal and a mesenchymal component, with the former including a major reservoir of epithelial stem cells but also melanocytes and other cell types. Hair follicles continuously cycle, undergoing consecutive phases of resting, growing, and regression. Many biomolecules carried by EVs have been involved in the control of the hair follicle cycle and stem cell function. Thus, investigating the role of either naturally produced or therapeutically delivered EVs as signaling vehicles potentially involved in skin homeostasis and hair cycling may be an important step in the attempt to design future strategies towards the efficient treatment of several skin disorders. View Full-Text
Keywords: extracellular vesicles; exosomes; apoptotic bodies; skin; hair follicles; hair cycle; stem cells; immune cells extracellular vesicles; exosomes; apoptotic bodies; skin; hair follicles; hair cycle; stem cells; immune cells
►▼ Show Figures 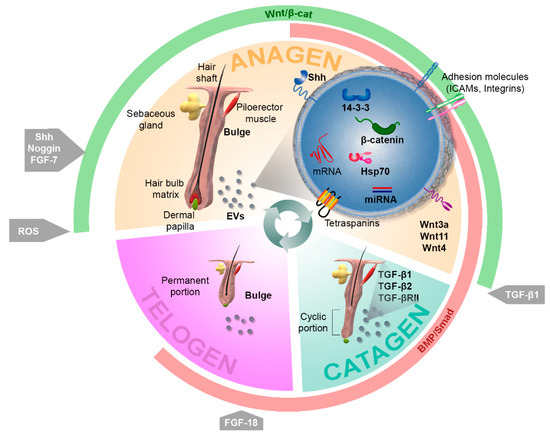