The aim of our study was to examine the effects of different dietary strategies, high-fat (HFd) or standard diet (Sd) alone or in combination with standardized oral supplementation (0.45 mL/kg/day) of Aronia melanocarpa extract (SAE) in rats with metabolic syndrome (MetS). SAE is an official product of pharmaceutical company Pharmanova (Belgrade, Serbia); however, the procedure for extraction was done by EU-Chem company (Belgrade, Serbia). Rats were divided randomly into six groups: control with Sd, control with Sd and SAE, MetS with HFd, MetS with HFd and SAE, MetS with Sd and MetS with Sd and SAE during 4 weeks. At the end of the 4-week protocol, cardiac function and liver morphology were assessed, while in the blood samples glucose, insulin, iron levels and systemic redox state were determined. Our results demonstrated that SAE had the ability to lower blood pressure and exert benefits on in vivo and ex vivo heart function. Moreover, SAE improved glucose tolerance, attenuated pathological liver alterations and oxidative stress present in MetS. Obtained beneficial effects of SAE were more prominent in combination with changing dietary habits. Promising potential of SAE supplementation alone or in combination with different dietary protocols in triggering cardioprotection should be further examined in future.
Keywords: metabolic syndrome; Aronia melanocarpa; standardized extract; dietary strategies; supplementation metabolic syndrome; Aronia melanocarpa; standardized extract; dietary strategies; supplementation

Metabolic syndrome (MetS) represents one of the metabolic disorders characterized by abdominal obesity, dyslipidemia, hypertension, insulin resistance and diabetes mellitus (DM) type 2 [1,2]. There is a great concern since MetS directly promotes the development of cardiovascular disorders, possibly because it results in increased oxidative stress and low-grade inflammation [3]. Therapeutic approaches involve dietary restriction or a combination of synthetic antidiabetic and hypolipidemic drugs [4]. However, increasing incidence of MetS associated with the undesirable side—effects and high cost of available drugs indicates the need to discover new, less harmful herbal medicines efficient in controlling both blood glucose and lipids [4,5]. Therefore, a lot of plant extracts as well as plant-derived biomoleculs such as polyphenols, have been under research for the prevention and therapy of MetS [1]. It has been well documented that polyphenols, especially anthocyanins and quercetin, exert the potential to enhance the glucose uptake by muscle and adipocyte cells, thus exerting antidiabetic effect [6].
Aronia melanocarpa (A. melanocarpa) or black chokeberry is a fruit/plant which belongs to the Rosaceae family and is native to North America [7]. However, it has been commonly used in Europe as ingredient for juices, wine, jams, teas and cordial liqueurs [8,9]. A. melanocarpa represents one of the richest sources of polyphenols among fruits, with anthocyanins and flavonoids identified as major components responsible for its therapeutic potential [10,11]. Recent researches have focused attention on A. melanocarpa due to its numerous health benefits in a broad range of pathological conditions [12]. It has been reported that fruit and extracts of A. melanocarpa exert gastroprotective, hepatoprotective, antiinflammatory and antiproliferative activity [12,13]. Furthermore, the health-promoting effects of extracts of this plant involve antiatherosclerotic, antiplatelet and hypoglycemic properties [7,14]. Moreover, it was previously confirmed that A. melanocarpa extract may reduce systolic and diastolic pressure and be useful in the management of DM [5,13]. However, to our best knowledge, the effectiveness of A. melanocarpa extract in combination with different diet regimens in the treatment of MetS has been not investigated so far.
Therefore, the aim of our study was to examine different dietary strategies, high-fat (HFd) or standard diet (Sd) alone or in combination with standardized A. melanocarpa extract (SAE) supplementation, and their potential benefits in the prevention and treatment of various complications in rats with MetS.

2.1. Body Mass Index (BMI) of Healthy and Rats with MetS after 4-Weeks of Dietary Changes

2.2. Changes in Blood Pressure and Heart Rate in Healthy and Rats with MetS on the Different Diet Regime

2.3. Effect of Dietary Changes in Healthy and Rats with MetS in In Vivo Cardiac Function

2.4. Effect of Dietary Changes in Healthy and Rats with MetS on Ex Vivo Cardiac Function

Figure 3 shows the values of ex vivo measured cardiac function parameters and coronary flow, during pressure changing protocols (PCPs) on the Langendorff apparatus. To examine the potential difference due to various dietary habits, we compared the percentage of decrease (−) or increase (+) between PCP 1 and PCP 2 in the group (Table 2).
Major changes in maximum rate of pressure development in the left ventricle (dp/dt max) in PCP 1 versus PCP 2 were observed at coronary perfusion pressure (CPP) = 60 cm H2O and 80 cm H2O in MetS + HFd (−24.77; −35.3) and MetS + Sd (−24.23; −28.11) groups. In MetS groups that were fed with combination of mentioned diets and SAE, this parameter was not changed during pressure changing protocols. On the other hand, the most significant differences in minimum rate of pressure development in the left ventricle (dp/dt min) were observed in CTRL group at CPP = 60 cm H2O, 80 cm H2O and 100 cm H2O (−21.25; −22.03; −29.7), while during the PCPs there were no significant changes in systolic left ventricular pressure (SLVP), HR, and coronary flow (CF) in any of the examined groups (Figure 3, Table 2).

2.5. Effect of Dietary Changes in Healthy and Rats with MetS on Glucose and Insulin Levels during Oral Glucose Tolerance Test (OGTT)

2.5.1. Effects on Glucose Levels during OGTT

2.5.2. Effects on Insulin Levels during OGTT

2.6. Effect of Dietary Changes in Healthy and Rats with MetS on Serum Iron Levels

SAE supplementation significantly increased iron levels in serum of healthy and rats with MetS fed with HFd or Sd than in non-treated groups. CTRL group had the lowest values of iron in relation to all other examined groups (Figure 5).

As shown in Figure 7, in CTRL, SAE, МetS + HFd + SAE, МetS + Sd and МetS + Sd + SAE liver tissue is a common feature. Liver lobulus is fully preserved. Hepatocytes are correctly arranged in the liver plates, without change. Sinusoidal capillaries are common characteristics, also without change. Fibrosis as well as inflammation have not been detected. On the other hand, in МetS + HFd there was a microvesicular steatosis (fatty change).

At the end of the study protocol, body weight and body length were measured. Body length represents nose-anus length. Those parameters were used to calculate the BMI of the rats as follows:
Body mass index (BMI) = body weight (g)/length2 (cm2)

4.5. Evaluation of in vivo Cardiac Function

Following 4-week protocol, after short-term narcosis induced by intraperitoneal application of ketamine (10 mg/kg) and xylazine (5 mg/kg) and premedication with heparin as an anticoagulant, animals were sacrificed by decapitation. Then the chest was opened via midline thoracotomy, hearts were immediately removed and immersed in cold saline and aortas were cannulated and retrogradely perfused according to Langendorff technique, under gradually increasing coronary perfusion pressure (CPP) from 40 to 120 cm H2O [50]. The composition of Krebs-Henseleit buffer used for retrograde perfusion was as follows (mmol/L): NaCl 118 mmol/L, KCl 4.7 mmol/L, MgSO4 × 7H2O 1.7 mmol/L, NaHCO3 25 mmol/L, KH2PO4 1.2 mmol/L, CaCl2 × 2H2O 2.5 mmol/L, glucose 11 mmol/L, pyruvate 2 mmol/L, equilibrated with 95% O2 plus 5% CO2 and warmed to 37 °C (pH 7.4).
After placing the sensor (transducer BS473-0184, Experimetria Ltd., Budapest, Hungary) in the left ventricle, the following parameters of myocardial function have been measured: maximum rate of pressure development in the left ventricle (dp/dt max), minimum rate of pressure development in the left ventricle (dp/dt min), systolic left ventricular pressure (SLVP), diastolic left ventricular pressure (DLVP), heart rate (HR). Coronary flow (CF) was measured flowmetrically. Following the establishment of heart perfusion, the hearts were stabilized within 30 min with a basal coronary perfusion pressure of 70 cm H2O. To examine the heart function, after stabilization period, the perfusion pressure was gradually decreased to 60, and then increased to 80, 100 and 120 cm H2O and reduced to 40 cm H2O (pressure changing protocol 1, PCP 1) and again gradually increased from 40 to 120 cm H2O (pressure changing protocol 1, PCP 1).

Oral glucose tolerance test (OGTT) was performed at the end of 4-week protocol and a day before sacrificing animals. After overnight (12–14h) fasted animals, the blood sample was taken by tail bleeding to determine the fasting blood glucose and insulin level (0 min) and then glucose was administered orally in a dose of 2 g/kg body weight and blood samples were taken at 30, 60, 120 and 180 min after glucose loading. Glucose levels were determined in 0, 30, 60, 120 and 180 min, using glucometer (Accu-Chek, Roche Diagnostics, Indianapolis, IN, USA) with its corresponding strips. At 0 and 180 min, insulin levels were assessed in plasma samples by the enzyme-linked immunosorbent assay (ELISA) method as previously described [51].

In the moment of sacrificing animals blood samples were collected from jugular vein in order to estimate serum iron levels and systemic oxidative stress response. The levels of serum iron (SI) was determined on a biochemical analyzer (Dimension, Dade Behring, Milton Keynes, UK, USA) and the results were expressed in μg/L.
In plasma the following pro-oxidants were determined: the levels of nitrites (NO2−), superoxide anion radical (O2−) and hydrogen peroxide (H2O2). Parameters of antioxidative defence system, such as activities of superoxide dismutase (SOD) and catalase (CAT) and level of reduced glutathione (GSH) were determined in erythrocytes samples.
NO2− was determined as an index of NO production with Griess reagent. The method for detection nitrate in plasma is based on the Green and coworkers proposal and measured spectrophotometrically at a wavelength of 543 nm [52]. The concentration of O2− in plasma was measured at 530 nm, after the reaction of nitro blue tetrazolium in TRIS buffer [53]. The measurement of H2O2 is based on the oxidation of phenol red by hydrogen peroxide, in a reaction catalyzed by horseradish peroxidase (HRPO) as previously described by Pick and colleagues. The level of H2O2 was measured at 610 nm [54].
For determination of antioxidant parameters, isolated erytrocytes were prepared according to McCord and Fridovich [54]. CAT activity were determined at 360 nm toward to Beutler [55]. Lysates were diluted with distilled water (1:7 v/v) and treated with chloroform-ethanol (0.6:1 v/v) to remove hemoglobin [51]. SOD activity was determined by the epinephrine method of Misra and Fridovich. Detection was performed at 470 nm [56]. Level of GSH is based on GSH oxidation via 5,5-dithiobis-6,2-nitrobenzoic acid as previously described by Beutler. Measuring was performed at 420 nm [57].

Liver tissue samples were fixed in 4% buffered paraformaldehyde solution and immersed in paraffin. Afterwards 4-micrometre-thick sections were stained with hematoxylin and eosin (H&E) [43].

Our results highlighted cardioprotective potential of SAE in treatment of MetS, involving lowering blood pressure and favorable effects on heart function. Furthermore, SAE effectively suppressed the body weight gain, improved glucose tolerance and attenuated liver steatosis and oxidative stress present in MetS, thus indicating its promising role in management of MetS-related diseases. Moreover, increase in iron concentration indicates its health benefits in iron deficiency. Obtained beneficial effects would be more prominent in c combination with changing dietary habits. This research may be a starting point for further experimental and clinical investigations which would fully evaluate the effects of SAE alone or in combination with different dietary protocols in various models of chronic diseases. 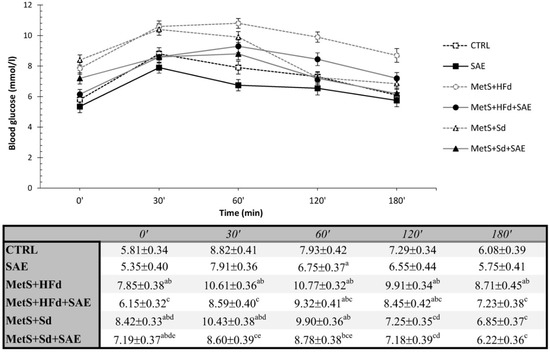 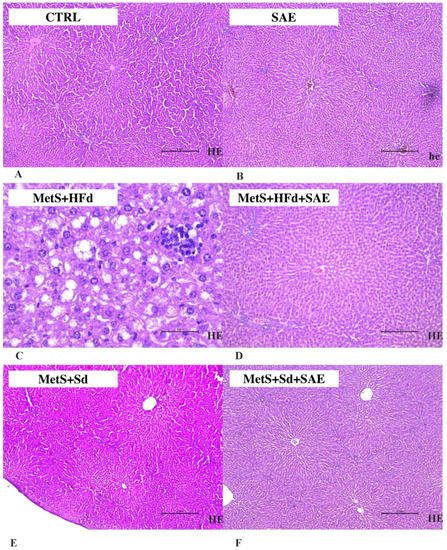 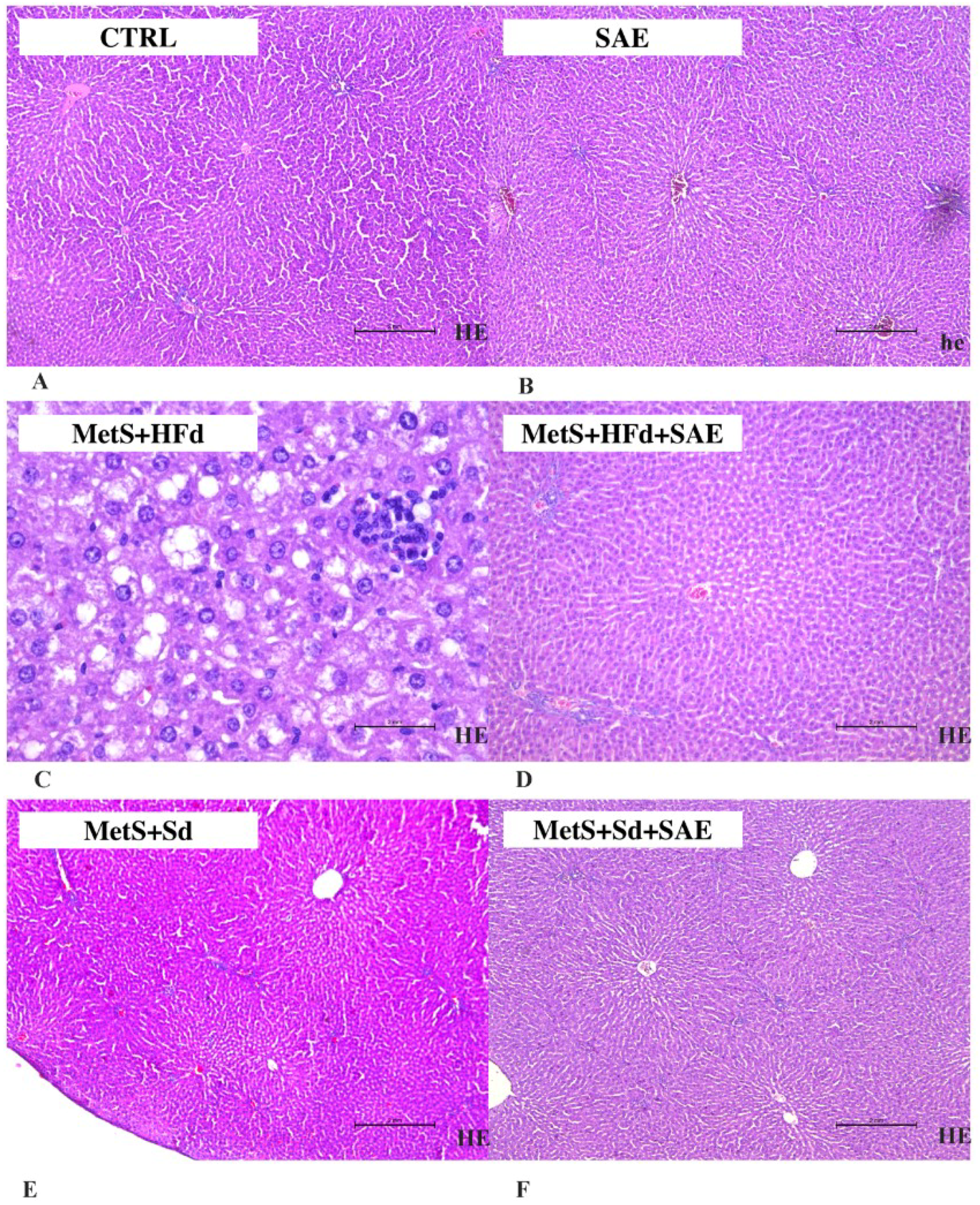