:
Glioblastoma multiforme (GBM) is the commonest primary brain malignancy with extremely poor prognosis. Resveratrol posseses anti-cancer effects, while GBM cells respond differently to it due to certain unknown reason(s). Because the tumor-derived exosomes are supposed to influence chemosensitivity, the exosomic proteins released from resveratrol-sensitive U251 and resveratrol-resistant glioblastoma LN428 cells are profiled before (N/Exo) and after drug treatment (Res/Exo) by label-free liquid chromatography-mass spectrometry (LC-MS). The therapeutic implications of the proteomic findings are estimated by gene ontology enrichment analysis (GO) and the Kyoto Encyclopedia of Genes and Genomes (KEGG)-based bioinformatic analyses and further elucidated by exosome co-incubating. The results reveal that U251/N/Exo but not U251/Res/Exo enhances resveratrol sensitivity of resveratrol-resistant LN428 cells. The resveratrol sensitive properties of U251 cells are not altered by either LN428/N/Exo or LN428/Res/Exo. U251/N/Exo contains higher levels of chromatin silencing and epidermis development proteins, while U251/Res/Exo has more oxygen transport and G protein-coupled receptor. Both of LN428/N/Exo and LN428/Res/Exo are rich in the proteins related with nucleosome assembly, microtubule-based process and chromatin silencing. In conclusion, U251/N/Exo sensitizes LN428 cells to resveratrol via delivering drug sensitizing signals, suggesting the presence of additional factor(s) that may determine the resveratrol sensitivities of glioblastoma cells.
Keywords:
glioblastoma cells; resveratrol; exosome; proteomics; drug sensitivity

Glioblastoma multiform (GBM) is the most common primary brain malignancy with annual incidence of about 3/100,000 [1]. The standard care for GBM is maximum feasible surgical resection followed by temozolomide-based chemotherapy [2]. However, this combined therapy merely gains about 15 months of median overall survival time because of high recurrent rates and frequent radio- and chemo-resistance [3]. Moreover, the anti-glioblastoma drugs currently used cause severe toxic effects [4] and consequently reduce the quality of life of GBM patients [5]. It would therefore be of therapeutic value to explore alternative approaches for the better treatment of this lethal malignancy.
Resveratrol (trans-3,5,4′-trihydroxystibene, C14H12O3), the natural plant-derived compound, posses multiple anticancer activities including sensitization of radiation and chemotherapy by promoting the differentiation of cancer cells [6]. This lipophilic compound is able to cross the blood-brain barrier through simple diffusion and exerts anti-cancer effects in the brain [7]. Moreover, resveratrol exhibits little adverse effect on normal brain cells in vitro [8] and in vivo [9], indicating its safety for practical application. So far, resveratrol has not yet been clinically used because of its low in vivo bioavailability when administered systemically [10]. This therapeutic dilemma can be largely overcome via organ-targeted drug delivery [11]. For instance, lumbar puncture-delivered resveratrol efficiently suppresses rat orthotopic GBM growth [12], especially when it is applied post-operatively [13]. The above results suggest resveratrol as a potential agent against human GBMs.
It has been found that human GBM cell lines respond differently to resveratrol [14]. For instance, the human U251 cell line is highly sensitive to resveratrol in terms of distinct growth arrest and extensive apoptosis, while the LN428 cell line shows little response under the same experimental conditions [15]. These findings suggest the necessity to investigate the underlying reason(s) leading to the distinct response of GBM cells to resveratrol for personalized anti-GBM therapy. It has been supposed that the exosomes released from drug-resistance cancer cells can increase the drug-tolerance of the receptor cells including GBM cells [16]. However, no datum has been so far available concerning (1) the impact of exosomes from drug-sensitive cells in drug sensitivity and (2) the relevance of exosomic patterns with resveratrol sensitivities of GBM cells. The current study thus aims to address the above issues by profiling exosomic proteins of U251 and LN428 cells before and after resveratrol treatment and bi-directionally analyze their influence in resveratrol sensitivity.

2.2. Prepared Exosomes from U251 and LN428 Cells without and with Drug Treatment

Hoechst DNA staining assay was used to detect mycoplasma infection and both U251 and LN428 cell lines are out of contamination. The exosomes were purified from supernatant of normally cultured U251 or LN428 cells as U251/or LN428/N/Exo, DMSO-treated as DMSO/Exo and resveratrol-treated as Res/Exo, respectively. Transmission electron microscopy (TEM) showed the presence of 30 nm to 200 nm membrane bounded vesicles (Figure 2A). In concordance, NTA revealed the exosome size distribution is from 30 nm–200 nm (Figure 2B,C). NTA-based exosome quantification showed that resveratrol promoted exosome release especially for both U215 and LN428 cells in the extents of 415.9% and 12.1%, respectively. Western blot analysis revealed that the exosome typical protein CD63 was enriched in exosome samples, while β-actin is undetectable (Figure 2D).

2.4. Distinct Protein Compositions of U251- and LN428-Derived Exosomes

The liquid chromatography-mass spectrometry (LC-MS/MS) raw data were searched against the human database. The representative proteins with significant changes (>1.3 folds) between the U251 and LN428 cells without (N/Exo) and with resveratrol treatment (Res/Exo) are shown in Table 1. A total of 123 types of protein were identified in U25 and 216 in LN428 exosomes, respectively. The detailed protein database of each group is shown in the following diagram (Figure 4A–C). U251/N/Exo have higher Keratin (KRT including KRT18, KRT19) and H2A histone family member X (H2AX including H2AFX, HIST1H2AD) levels and lower Ras-related protein 1 (Rap1 including Rap1B, Rap1A), polymeric filaments form actin (F-actin including ACTB, ACTA2) levels, and guanine nucleotide binding protein (G protein including GNAS, GNAI). In contrast, the proteomic pattern of LN428/N/Exo is distinct to that of U251/N/Exo by showing lower KRT, H2AX and higher Rap1 and F-actin. The proteomic patterns of U251 and LN428 cells are altered by resveratrol in terms of KRT, H2AX, Rap1, F-actin and G protein being conversed.

By the use of gene ontology enrichment (GO) analysis, the exosome-derived proteins were characterized according to their biological process, cellular component and molecular function (Figure 5A,B). The top cellular component GO annotation was ‘extracellular exosomes’ with 103 proteins out of 131 (U251/Exo) and 178 proteins out of 216 (LN428/Exo), confirming our exosome isolation efficiency. A Kyoto Encyclopedia of Genes and Genomes (KEGG) pathway analysis of these proteins were mapped (Figure 6A,B), the Rap1 signaling and necroptosis pathway (p < 0.001) are significant enriched in U251/N/Exo versus U251/Res/Exo, suggesting the regulatory role of exosomes within the drug sensitivity.

Resveratrol (Sigma Chem CO., St. Louis, MO, USA) was dissolved in dimethylsulfoxide (DMSO; Sigma Chem CO., St. Louis, MO, USA) to a stock concentration of 100 mM which was diluted with culture medium to the working concentration of 100 μM for cell treatment. The two GBM cell lines were treated by 100 μM resveratrol for 48 h. The cells cultured routinely were used as normal control, and the cells cultured in the medium containing 0.1% DMSO as background control. Each of the experiments was set in triplicate, and the experiments were repeated at least three times to establish confidential conclusions.

4.3. Evaluation of Cell Proliferation and Death

To elucidate the cellular response of U251 and LN428 cells to resveratrol, H/E morphological staining, and 3-[4,5-Dimethylthiazol-2-yl]-2,5-diphenyl-tetrazolium bromide (MTT) cell proliferation assay were performed on cell-bearing coverslips without or with the drug treatment by the methods described elsewhere [14]. Cells treated with 0.1% DMSO were used as background controls. The normally cultured cells were used as a negative control. Digital pathology scanner (Aperio CS2, Leica Biosystems, Nussloch, German) was used to observe and photograph the cells on coverslips.

5 μL exosome samples of the experimental groups were fixed with 1% glutaraldehyde in PBS, and a 5 μL drop of each sample was placed on a carbon-containing grid and incubated for 20 min at room temperature for electron microscopy; 5 μL of 3% phosphotungstic acid (PH = 7) was used to stain each sample for 5 min, followed by observation under a transmission electron microscope (H-7650; Hitatchi high-technologies, Tokyo, Japan) at a voltage of 80 kV.

Nanoparticle tracking analysis (NTA) was employed to check the prepared exosome samples. Briefly, exosomes re-suspended in 50 μL PBS were further diluted to 300-fold to achieve between 20 and 100 objects per frame and detected by NanoSight NS-300 (Malvern Panalytical, Malvern, UK). Each sample was measured in triplicate through the camera with an acquisition time of 30 s and the detection threshold was setting at 3. At least 200 completed were analyzed in each video. NTA 2.3 software was used to capture and analyze the result.

LN428 cells were incubated with the 20 μg/mL exosomes derived from U251 cells without or with 48 h 100 μM resveratrol treatment for 48 h by putting the LN428 coverslips to the 12-well plates, and the cells seeded in 96-well plates were treated in the same manner for MTT assay. U251 derived N/Exo, DMSO/Exo, Res/Exo (20 μg/mL) or PBS (vehicle), were respectively used to incubate with LN428 cells for 48 h, followed by 100 μM resveratrol or 0.1% DMSO treatment for another 48 h. The collected cell-bearing coverslips were subjected to HE staining; the cells in 96-well plates to MTT assay. U251 cells were treated in the same manners, using LN428 derived N/Exo, DMSO/Exo, Res/Exo (20 μg/mL) or PBS (vehicle), respectively.

Tryptic digestion on exosome for each group was performed as described previously with modifications [56]; 50 μg exosome samples (detected by BCA) were precipitated by ice-cold acetone (acetone/sample 4:1) and place at −20 °C for overnight. Reducing was then undertaken in 500 µM of DTT for 1.5 h and protecting by incubation in 6.5 μL 50 mM IAA in dark for 40 min at room temperature. Tryptic digestion was done for 24 h at 37 °C to digest exosomal proteins of each experimental groups. Peptide desalting was performed (Pierce C18 Tips; Thermo Fisher Scientific, Waltham, MA, USA). Finally, the samples were eluted sequentially with 0.1% acetic acid in a 80% ACN and dispense into a Eppendorf tube. The combined eluate was concentrated in a Vacuum Concentrator (Labconco, Kansas City, MO, USA), then resuspended by 30 μL 0.1% formic acid solution and injected into an autosampler vial for further LC-MS test.

Digested exosome peptides were analyzed by reversed-phase LC on an Easy-nLc 1000 system directly accompanied with a Q Exactive Plus Orbitrap mass spectrometer (Thermo Fisher Scientific, USA) by a nanoelectrospray source (Thermo Fisher Scientific, USA). Using 20 cm length and 75 μm inner diameter to pack in house with ReproSil-Pur 130C18-AQ 3 μm particles (Dr. Maisch HPLC GmbH, Germany). The peptide mixtures were separated using 75 min linear gradients and a two-buffer system, including buffer A (0.1% FA) and buffer B (ACN/0.1% FA). The flow rate was set to 300 nL/min. Peptides effusion from the column were sprayed into the mass spectrometer with a spray voltage of 2.3 kV with a 300 °C capillary. The mass spectrometer was working in a data-dependent mode, requiring a survey scan at 70,000 resolution with a maximum injection time of 50 ms and an automatic gain control (AGC) target of 3 × 106 ions. Furthermore, the scanning range is from 300 to 2000 m/z.

Raw MS data were processed using Proteome Discoverer (Version 1.4.0.288, Thermo Fisher Scientific, Bremen, Germany) with the search engine SEQUEST HT. MS/MS spectra were searched against the UniprotKB human database (downloaded on, 2018). The peptide mass, fragment mass tolerance and maximum missed cleavage sties were respectively set as 10 ppm, 20 mDa and 2 sites. Moreover, a 1% false discovery rate was used to filter the identification peptides. As for quantitative analysis of MS results, we used a label-free analysis to calculate the quantitative changes of the identified proteins among different groups. To identify the most significantly differentially expressed protein, we analyzed the data through GO and KEGG pathway analyses. Proteins with expression fold change >1.3 and Student’s t-test, p < 0.05 were filtered as differentially expressed proteins between exosomes isolated from different groups.

The results of cell counting and MTT assay were evaluated with the independent-samples t-test and analysis of variance (ANOVA). Data were presented as mean ± standard deviation (SD) of separate experiments (n ≥ 10). When required, p-values are stated in the figure legends (* p < 0.05; ** p < 0.01). 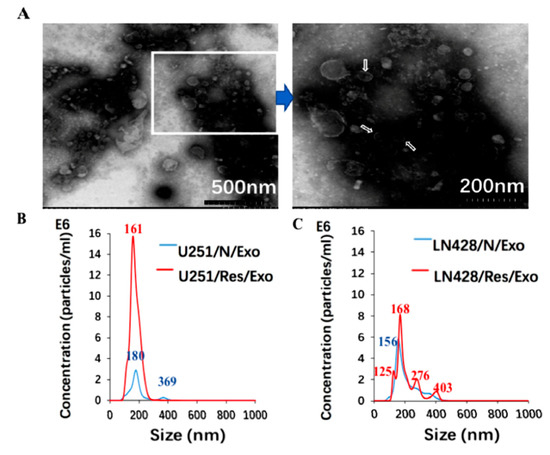 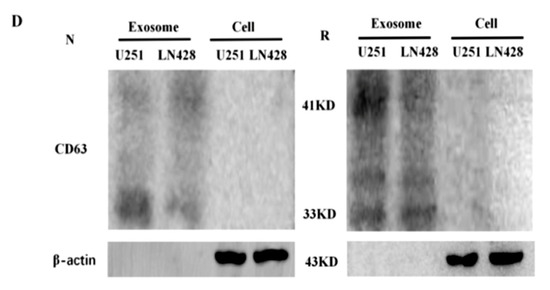 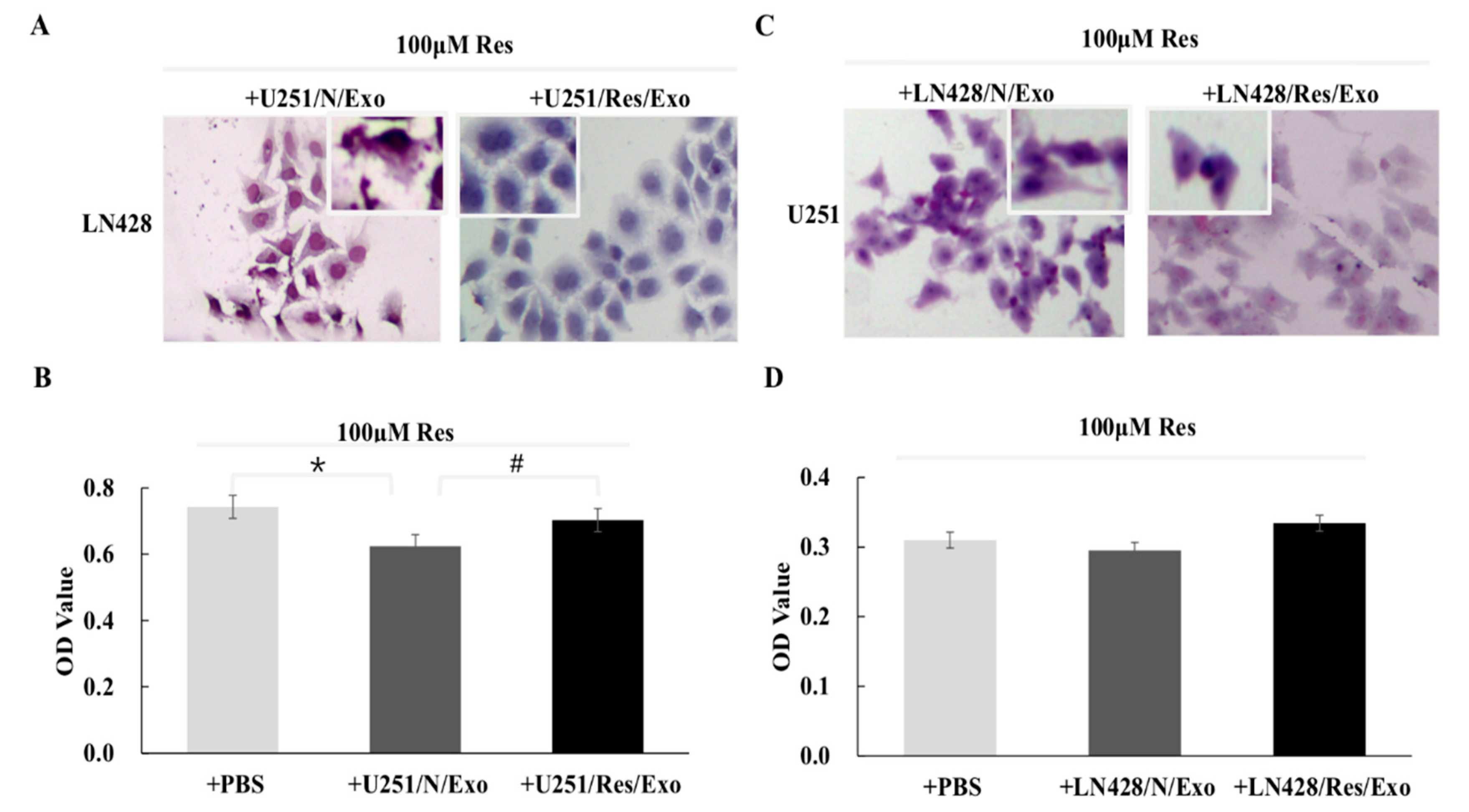 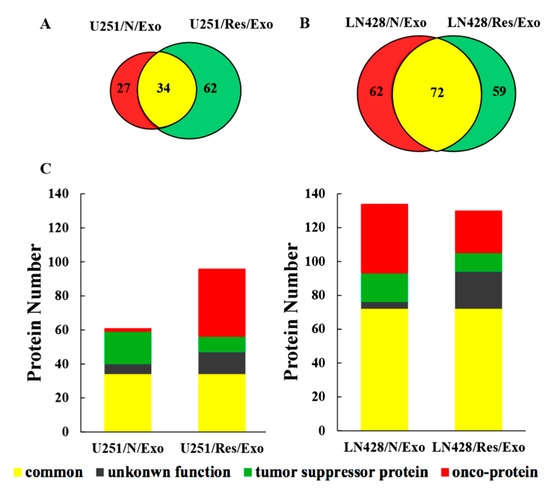