The differential transcriptional expression of CLIC4 between tumor cells and the surrounding stroma during cancer progression has been suggested to have a tumor-promoting effect. However, little is known about the transcriptional regulation of CLIC4. To better understand how this gene is regulated, the promoter region of CLIC4 was analyzed. We found that a high GC content near the transcriptional start site (TSS) might form an alternative G-quadruplex (G4) structure. Nuclear magnetic resonance spectroscopy (NMR) confirmed their formation in vitro. The reporter assay showed that one of the G4 structures exerted a regulatory role in gene transcription. When the G4-forming sequence was mutated to disrupt the G4 structure, the transcription activity dropped. To examine whether this G4 structure actually has an influence on gene transcription in the chromosome, we utilized the CRISPR/Cas9 system to edit the G4-forming sequence within the CLIC4 promoter in the cell genome. The pop-in/pop-out strategy was adopted to isolate the precisely-edited A375 cell clone. In CRISPR-modified A375 cell clones whose G4 was disrupted, there was a decrease in the endogenous CLIC4 messenger RNA (mRNA) expression level. In conclusion, we found that the G4 structure in the CLIC4 promoter might play an important role in regulating the level of transcription. View Full-Text
Keywords: G-quadruplex; transcriptional regulation; promoter; CRISPR/Cas9 G-quadruplex; transcriptional regulation; promoter; CRISPR/Cas9
►▼ Show Figures 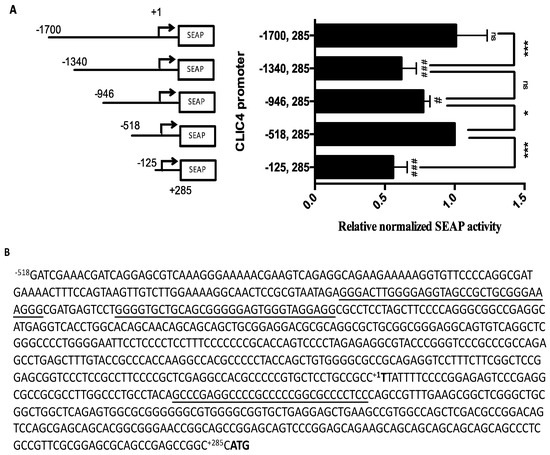