Biological Aspects of mTOR in Leukemia
Previous Article in Journal

Consecutive monoculture of Rehmannia glutinosa, highly valued in traditional Chinese medicine, leads to a severe decline in both quality and yield. Rhizosphere microbiome was reported to be closely associated with the soil health and plant performance. In this study, comparative metagenomics was applied to investigate the shifts in rhizosphere microbial structures and functional potentials under consecutive monoculture. The results showed R. glutinosa monoculture significantly decreased the relative abundances of Pseudomonadaceae and Burkholderiaceae, but significantly increased the relative abundances of Sphingomonadaceae and Streptomycetaceae. Moreover, the abundances of genera Pseudomonas, Azotobacter, Burkholderia, and Lysobacter, among others, were significantly lower in two-year monocultured soil than in one-year cultured soil. For potentially harmful/indicator microorganisms, the percentages of reads categorized to defense mechanisms (i.e., ATP-binding cassette (ABC) transporters, efflux transporter, antibiotic resistance) and biological metabolism (i.e., lipid transport and metabolism, secondary metabolites biosynthesis, transport and catabolism, nucleotide transport and metabolism, transcription) were significantly higher in two-year monocultured soil than in one-year cultured soil, but the opposite was true for potentially beneficial microorganisms, which might disrupt the equilibrium between beneficial and harmful microbes. Collectively, our results provide important insights into the shifts in genomic diversity and functional potentials of rhizosphere microbiome in response to R. glutinosa consecutive monoculture. View Full-Text
Keywords: Rehmannia glutinosa; soil sickness; metagenomics; rhizosphere microbiome; functional potential Rehmannia glutinosa; soil sickness; metagenomics; rhizosphere microbiome; functional potential
►▼ Show Figures 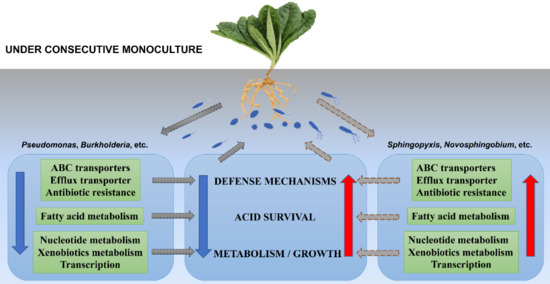