Farrerol, a type of 2, 3-dihydro-flavonoid, is obtained from Rhododendron. Previous studies have shown that Farrerol performs multiple biological activities, such as anti-inflammatory, antibacterial, and antioxidant activity. In this study, we aim to investigate the effect of Farrerol on colonic inflammation and explore its potential mechanisms. We found that the effect of Farrerol was evaluated via the 2,4,6-trinitrobenzene sulfonic acid (TNBS)-induced colitis model in mice and found that Farrerol has a protective effect on TNBS-induced colitis. Farrerol administration significantly improved the weight change, clinical scores, colon length, and intestinal epithelium barrier damage and markedly decreased the inflammatory cytokines production in TNBS-induced mice. The protective effect of Farrerol was also observed in LPS-induced RAW264.7 cells. We found that Farrerol observably reduced the production of inflammatory mediators including IL-1β, IL-6, TNF-α, COX-2, and iNOS in LPS-induced RAW264.7 cells via suppressing AKT, ERK1/2, JNK1/2, and NF-κB p65 phosphorylation. In conclusion, the study found that Farrerol has a beneficial effect on TNBS-induced colitis and might be a natural therapeutic agent for IBD treatment. View Full-Text
Keywords: Farrerol; IBD; colitis; MAPK; NF-κB Farrerol; IBD; colitis; MAPK; NF-κB
►▼ Show Figures 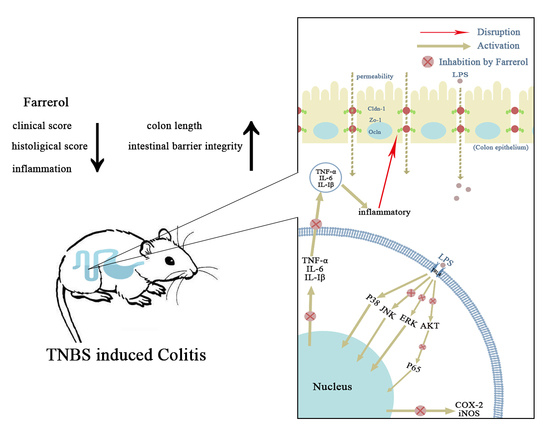