Copaifera of the Neotropics: A Review of the Phytochemistry and Pharmacology
Previous Article in Journal

Malaria, as a major global health problem, continues to affect a large number of people each year, especially those in developing countries. Effective drug discovery is still one of the main efforts to control malaria. As natural products are still considered as a key source for discovery and development of therapeutic agents, we have evaluated more than 2000 plant extracts against Plasmodium falciparum. As a result, we discovered dozens of plant leads that displayed antimalarial activity. Our phytochemical study of some of these plant extracts led to the identification of several potent antimalarial compounds. The prior comprehensive review article entitled “Antimalarial activity of plant metabolites” by Schwikkard and Van Heerden (2002) reported structures of plant-derived compounds with antiplasmodial activity and covered literature up to the year 2000. As a continuation of this effort, the present review covers the antimalarial compounds isolated from plants, including marine plants, reported in the literature from 2001 to the end of 2017. During the span of the last 17 years, 175 antiplasmodial compounds were discovered from plants. These active compounds are organized in our review article according to their plant families. In addition, we also include ethnobotanical information of the antimalarial plants discussed. View Full-Text
Keywords: anti-malaria activity; plants; natural products; ethnopharmacology; Plasmodium parasites anti-malaria activity; plants; natural products; ethnopharmacology; Plasmodium parasites
►▼ Show Figures 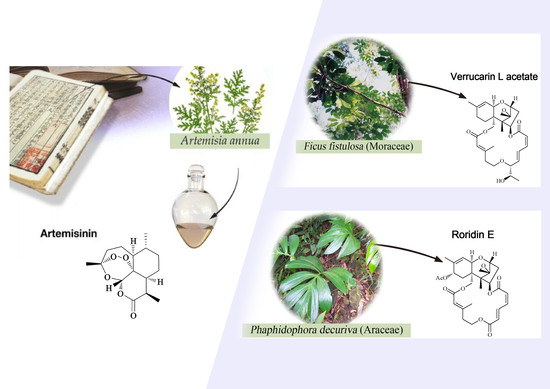