Role of Macrophages in Brain Tumor Growth and Progression

Visceral adipose tissue (VAT) is considered to be an energy storage depot and has now been recognized as a highly active organ responsible for controlling numerous metabolic, hormonal, and immune processes [1,2,3]. Moreover, it is well-accepted that a large VAT mass is a main risk factor for developing metabolic dysfunction [4]. This tissue is constituted mainly by two components: (1) mature adipocytes that are responsible for controlling metabolism by storing excess calories as lipids as well as the production of endocrine hormones, such as leptin, resistin, and adiponectin [5]; and (2) stromal vascular fraction (SVF), which is a rich source of preadipocytes, endothelial cells, fibroblasts, mesenchymal cells, hematopoietic progenitor cells, and immune cells [6]. Of the heterogeneous leukocytes in VAT, macrophages are considered to be important contributors to adipose tissue maintenance, regulating immune and metabolic functions through cross-talk with adipocytes [7].
It has been demonstrated in animal models and human adipose tissue that macrophage phenotype is shaped by the microenvironment in the adipose tissue depots. Adipose tissue macrophage (ATM) accumulation and polarization from the anti-inflammatory (M2) to the pro-inflammatory (M1) phenotype have been associated with the metabolic and inflammatory changes that are the hallmarks of obesity [2,8].
On the other hand, the growing rates of overweight women at reproductive age and the increasing number of overweight or obese women beginning pregnancy are considered to be serious public health issues in the 21st century [9]. This has consequences in the mother and has subsequent effects on the child, leading to obesity, dyslipidemias, Type 2 diabetes, and hypertension later in life [10,11].
The potential role of ATMs in pregnancy as regulators of maternal inflammation is not yet fully understood. Therefore, the aim of this study was to characterize macrophage populations in VAT from pregnant women and to evaluate differences by weight status.

Protocol 212250-3210-21002-06-15 was approved by the IRB of the Instituto Nacional de Perinatologia in Mexico City. Each participant signed a written informed consent form.
A cross-sectional study was conducted from January 2016 to December 2016 at Instituto Nacional de Perinatologia, Mexico City, Mexico. Women were recruited consecutively and written informed consent was obtained from each one. During this period, 1294 newborns were delivered by cesarean section at term (37–40 weeks of gestation by obstetric ultrasonography) in our institution. A total of 69 women met the inclusion criteria, 34 declined to participate in the study, it was not possible to obtain samples from 8 women, and 6 collected samples were insufficient for the experiments. Twenty-one healthy pregnant women with intact membranes, no clinical evidence of intrauterine infection, and normal weight gain during pregnancy were enrolled according to the inclusion criteria: age 20–40 years, pregestational Body Mass Index (BMI) 18.5 kg/m2 and known pregestational weight. Exclusion criteria included diagnosis of gestational or pre-gestational diabetes, thyroid, hypertensive, or immunological disease, treatment with drugs that could affect metabolism or inflammation during pregnancy, intrauterine growth restriction, or fetal genetic abnormalities. Maternal weight and height at the end of pregnancy were measured by trained personnel. Pregestational weight was collected from clinical files and BMI was calculated according to the World Health Organization criteria. The subjects were stratified into three groups: normal weight (BMI 18.5–24.9 kg/m2; n = 7), overweight (BMI 25.0–29.9 kg/m2; n = 7), and obesity (BMI 29.9 kg/m2; n = 7).

Visceral Adipose Tissue biopsies (5 × 5 cm) were obtained from the omentum (middle bottom portion) prior to the hysterotomy for delivery under sterile conditions. Samples were transported in sterile recipients and processed up to 1 h after collection.

2.3. Isolation of the Stromal Vascular Fraction from Visceral Adipose Tissue

Visceral Adipose Tissue biopsies were washed in 1× Phosphate Buffered Saline (1× PBS) before being minced with sterile scissors to be digested with collagenase solution (0.01 M PBS, 5 mM glucose, 1.5% w/v BSA, and 0.25% collagenase type I (GIBCO by Life Technologies, Carlsbad, CA, USA) at a pH of 7.4) for 1 h at 37 °C under constant shaking. After this, the digested tissue was filtered and centrifuged at room temperature (RT) for 10 min at 200× g to separate adipocytes by flotation from the stromal vascular fraction. After discarding the supernatant, the cell pellet containing preadipocytes, endothelial cells, and immune cells was incubated in erythrocyte lysis buffer (Roche, Basel, Switzerland) for 5 min at RT. The reaction was stopped by addition of ice-cold 1× PBS before the solution was centrifuged at 4 °C for another 5 min at 1500× g. The cell pellet was washed with 1× PBS twice under the same conditions, and cells were counted in a standard hemocytometer using trypan blue staining to assess viability.

Distribution analysis was assessed using the Shapiro–Wilk normality test. Multiple groups were analyzed by one-way ANOVA or Kruskal–Wallis one-way analysis of variance, while pairs of groups were compared by the Mann–Whitney U test as appropriate for variables that were not normally distributed. The relationship between two variables was determined by Spearman’s rank correlation coefficient. A linear regression model was performed to evaluate the effect of BMI on the variables of interest. Statistical analyses were performed with the IBM (Armonk, NY, USA) SPSS 20.0 statistical software. Unless otherwise stated, all data were expressed as mean ± SD (standard deviation) or median and interquartile range. In the present study, p 0.05 was considered statistically significant.

The characteristics of the studied population are shown in Table 1. Patients did not differ in maternal age, parity, and fasting glucose. Overweight and obese women delivered newborns with higher weight and height compared to the normal group (p = 0.03 and p = 0.02, respectively, data not shown), while no differences were found between gender, Capurro, Apgar, and Silverman–Anderson tests.
Visceral adipocyte size was measured in these patients. Adipocyte hypertrophy is observed both in VAT from women with a pregestational obesity or overweight status (Figure 1A). Adipocyte size in obese women was significantly bigger compared to women with normal weight (1.5–8.5 µ2 × 103 versus 0.5–5.5 µ2 × 103, p = 0.004). On the other hand, the overweight group tended to reach similar size to those from the normal group (0.5–6.5 µ2 × 103 versus 0.5–5.5 µ2 × 103, p 0.05 (Figure 1B), with a positive correlation observed between the adipocyte size and BMI (Figure 1C). Additionally, obese women showed an increased dispersion of adipocyte size compared to normal and overweight women, while the data dispersion of overweight was greater than normal weight women (Figure 1D). Adipocyte number per four fields was compared between the study groups, showing that women with pregestational obesity or overweight status have fewer adipocytes per field compared with the normal weight group (p = 0.01; Figure 1E). We found an association between adipocyte size and number with BMI, while the linear regression model predicts that an increased BMI explains up to 63.5% of the variance in adipocyte size and up to 65.1% of the decrease in adipocyte number per field (Figure 1F).

Multiparametric analysis with CD45 and CD14 revealed two different cell populations in the VAT stromal vascular fraction: one with hematopoietic origin (CD45+CD14+) and one with non-hematopoietic origin, which was characterized by the absence of CD45 marker (CD45−CD14+).
In addition, based on the HLA-DR expression, four subpopulations were clearly identified: (i) CD45−CD14+HLA-DRlow/−; (ii) CD45−CD14+HLA-DR+; (iii) CD45+CD14+HLA-DRlow/−; and (iv) CD45+CD14+HLA-DR+. The two CD45−CD14+ cell populations were classified as resident macrophages subsets, while double-positive cell populations (CD45+CD14+) were described as recruited macrophages subsets (Figure 2A).
The resident cell number present in VAT was significantly lower in women with pregestational obesity compared to both overweight (p 0.01) and lean women (p 0.05), while the recruited cell number showed a significant reduction (p 0.01) in the obese group compared to the overweight group. However, this did not differ for women who started their pregnancy with normal weight (p 0.05; Figure 2B).
The analysis between VAT macrophage subsets demonstrated that there was a higher number of resident HLA-DRlow/− macrophages in all study groups compared to the HLA-DR+ resident macrophage subset (p 0.05). Furthermore, data provided evidence that women with pregestational obesity had a significant reduction (p 0.01) in the number of resident HLA-DRlow/− macrophages compared with the normal weight group (Figure 2C).
On the other hand, the analysis in the recruited subsets showed that the number of HLA-DRlow/− macrophages was higher compared to the number of HLA-DR+ macrophages in the overweight group (p 0.05). No differences in the proportion of recruited macrophage subsets were found in the other study groups. The intergroup analysis demonstrated that obese women had significantly lower recruited HLA-DRlow/− and HLA-DR+ macrophages compared to overweight and lean women, respectively (p 0.01; Figure 2D).

Associations between VAT macrophage populations and BMI were determined. A linear regression model showed that the total number of resident cells per gram of VAT decreased by 32.8% with an increase in BMI (Figure 3A). However, this finding was not observed in the recruited macrophages (Figure 3B). Moreover, a linear regression analysis was performed to evaluate the effect of BMI on cell number for each resident macrophage subset, which revealed that higher BMI values explained up to 20.8% of variance in the number of resident HLA-DR low/− macrophages, although this did not explain the HLA-DR+ macrophage subset (Figure 3A1,A2).

3.4. CD206 and CD11c Surface Expression Is Higher in Recruited and Resident Macrophages from Women with Pregestational Obesity

This study was supported by the Instituto Nacional de Perinatologia to GEG. EBF was sponsored by CONACyT (Consejo Nacional de Ciencia y Tecnologia). 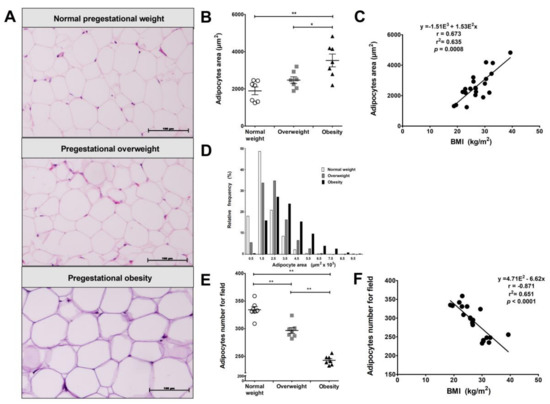 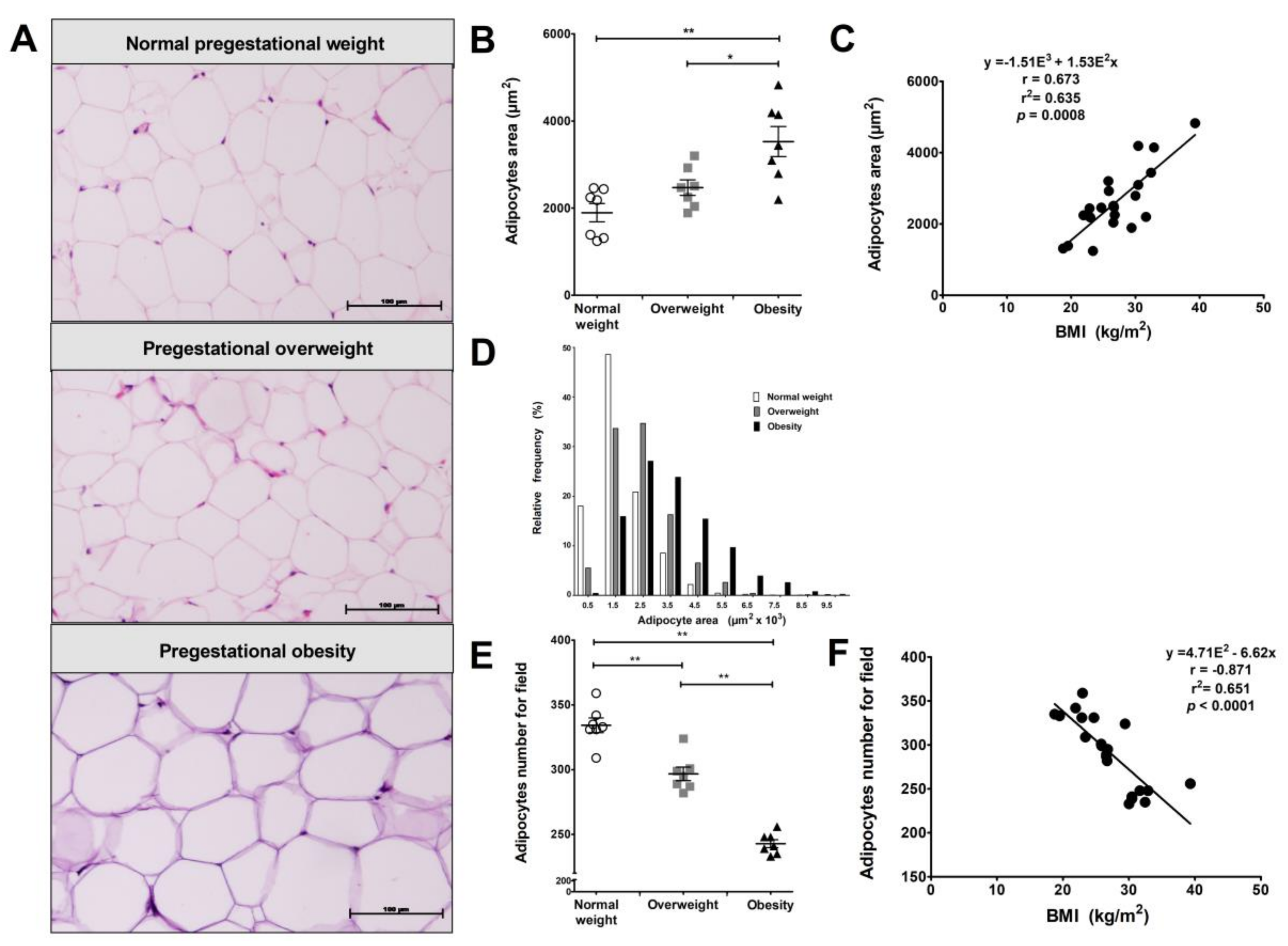 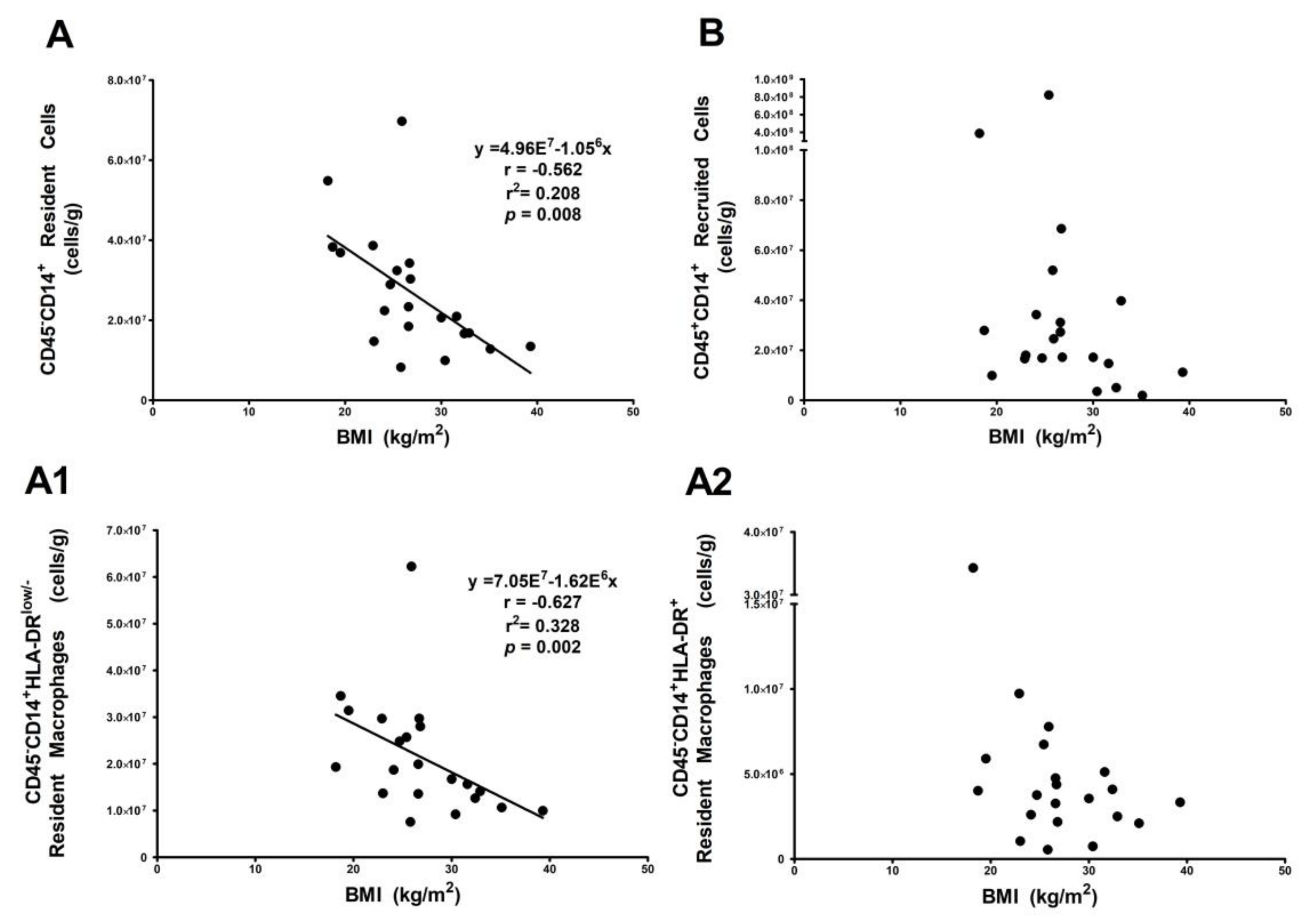