An Interplay between Senescence, Apoptosis and Autophagy in Glioblastoma Multiforme—Role in Pathogenesis and Therapeutic Perspective
Next Article in Special Issue

Kluyveromyces marxianus, an Attractive Yeast for Ethanolic Fermentation in the Presence of Imidazolium Ionic Liquids
Previous Article in Special Issue

Therapeutic and Preventive Effects of Osteoclastogenesis Inhibitory Factor on Osteolysis, Proliferation of Mammary Tumor Cell and Induction of Cancer Stem Cells in the Bone Microenvironment

Background: We examined the effects of recombinant human osteoclastogenesis inhibitory factor (hOCIF) on osteolysis, proliferation of mammary tumor cells, and induction of cancer stem cells (CSCs) in the tumor-bone and tumor-subcutaneous microenvironments (TB- and TS-microE). Methods: Mouse mammary tumor cells were transplanted onto the calvaria or into a subcutaneous lesion of female mice, creating a TB-microE and a TS-microE, and the mice were then treated with hOCIF. To investigate the preventive effects of hOCIF, mice were treated with hOCIF before tumor cell implantation onto the calvaria (Pre), after (Post), and both before and after (Whole). The number of CSCs and cytokine levels were evaluated by IHC and ELISA assay, respectively. Results: hOCIF suppressed osteolysis, and growth of mammary tumors in the TB-microE, but not in the TS-microE. In the Pre, Post, and Whole groups, hOCIF suppressed osteolysis, and cell proliferation. hOCIF increased mouse osteoprotegrin (mOPG) levels in vivo, which suppressed mammary tumor cell proliferation in vitro. These preventive effects were observed in the dose-dependent. hOCIF did not affect the induction of CSCs in either microenvironment. Conclusion: While receptor activator of NF-κB ligand (RANKL) targeting therapy may not affect the induction of CSCs, RANKL is a potential target for prevention as well as treatment of breast cancer bone metastasis. View Full-Text
Keywords: bone metastasis; mammary tumor; RANKL; bone microenvironment; osteoclastogenesis inhibitory factor; cancer stem cell bone metastasis; mammary tumor; RANKL; bone microenvironment; osteoclastogenesis inhibitory factor; cancer stem cell
►▼ Show Figures 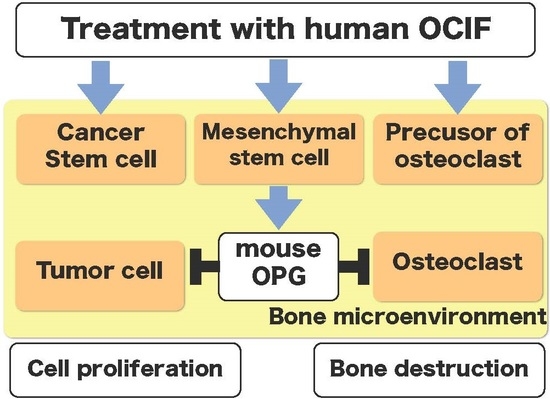