Hypothesis: Spontaneous Advent of the Prebiotic Translation System via the Accumulation of L-Shaped RNA Elements

Microsporidia are fungi-like parasites that have the smallest known eukaryotic genome, and for that reason they are used as a model to study the phenomenon of genome decay in parasitic forms of life. Similar to other intracellular parasites that reproduce asexually in an environment with alleviated natural selection, Microsporidia experience continuous genome decay that is driven by Muller’s ratchet—an evolutionary process of irreversible accumulation of deleterious mutations that lead to gene loss and the miniaturization of cellular components. Particularly, Microsporidia have remarkably small ribosomes in which the rRNA is reduced to the minimal enzymatic core. In this study, we analyzed microsporidian ribosomes to study an apparent impact of Muller’s ratchet on structure of RNA and protein molecules in parasitic forms of life. Through mass spectrometry of microsporidian proteome and analysis of microsporidian genomes, we found that massive rRNA reduction in microsporidian ribosomes appears to annihilate the binding sites for ribosomal proteins eL8, eL27, and eS31, suggesting that these proteins are no longer bound to the ribosome in microsporidian species. We then provided an evidence that protein eS31 is retained in Microsporidia due to its non-ribosomal function in ubiquitin biogenesis. Our study illustrates that, while Microsporidia carry the same set of ribosomal proteins as non-parasitic eukaryotes, some ribosomal proteins are no longer participating in protein synthesis in Microsporidia and they are preserved from genome decay by having extra-ribosomal functions. More generally, our study shows that many components of parasitic cells, which are identified by automated annotation of pathogenic genomes, may lack part of their biological functions due to continuous genome decay. View Full-Text
Keywords: Muller’s ratchet; genome decay; ribosome; rRNA expansions; rudimentary proteins Muller’s ratchet; genome decay; ribosome; rRNA expansions; rudimentary proteins
►▼ Show Figures 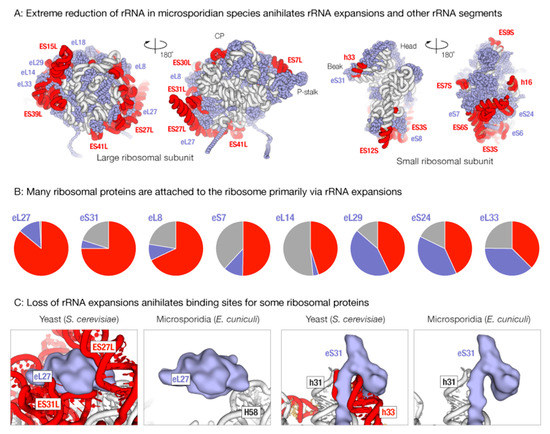