Selenium-Enriched Brushite: A Novel Biomaterial for Potential Use in Bone Tissue Engineering
Previous Article in Journal

The principal focus of this work is the in-depth analysis of the biological efficiency of inorganic calcium-filled bacterial cellulose (BC) based hydrogel scaffolds for their future use in bone tissue engineering/bioengineering. Inorganic calcium was filled in the form of calcium phosphate (β-tri calcium phosphate (β-TCP) and hydroxyapatite (HA)) and calcium carbonate (CaCO3). The additional calcium, CaCO3 was incorporated following in vitro bio-mineralization. Cell viability study was performed with the extracts of BC based hydrogel scaffolds: BC-PVP, BC-CMC; BC-PVP-β-TCP/HA, BC-CMC-β-TCP/HA and BC-PVP-β-TCP/HA-CaCO3, BC-CMC-β-TCP/HA-CaCO3; respectively. The biocompatibility study was performed with two different cell lines, i.e., human fibroblasts, Lep-3 and mouse bone explant cells. Each hydrogel scaffold has facilitated notable growth and proliferation in presence of these two cell types. Nevertheless, the percentage of DNA strand breaks was higher when cells were treated with BC-CMC based scaffolds i.e., BC-CMC-β-TCP/HA and BC-CMC-β-TCP/HA-CaCO3. On the other hand, the apoptosis of human fibroblasts, Lep-3 was insignificant in BC-PVP-β-TCP/HA. The scanning electron microscopy confirmed the efficient adhesion and growth of Lep-3 cells throughout the surface of BC-PVP and BC-PVP-β-TCP/HA. Hence, among all inorganic calcium filled hydrogel scaffolds, ‘BC-PVP-β-TCP/HA’ was recommended as an efficient tissue engineering scaffold which could facilitate the musculoskeletal (i.e., bone tissue) engineering/bioengineering. View Full-Text
Keywords: bacterial cellulose; in vitro bio-mineralization; bone tissue engineering; biocompatibility; apoptosis; DNA damage bacterial cellulose; in vitro bio-mineralization; bone tissue engineering; biocompatibility; apoptosis; DNA damage
►▼ Show Figures 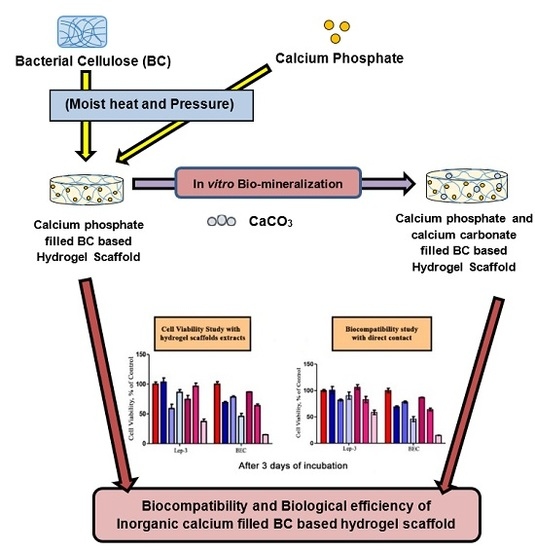