Tissue Engineering Therapies Based on Folic Acid and Other Vitamin B Derivatives. Functional Mechanisms and Current Applications in Regenerative Medicine
Previous Article in Journal

Nicotinamide adenine dinucleotide (NAD) and its phosphorylated form, NADP, are the major coenzymes of redox reactions in central metabolic pathways. Nicotinamide adenine dinucleotide is also used to generate second messengers, such as cyclic ADP-ribose, and serves as substrate for protein modifications including ADP-ribosylation and protein deacetylation by sirtuins. The regulation of these metabolic and signaling processes depends on NAD availability. Generally, human cells accomplish their NAD supply through biosynthesis using different forms of vitamin B3: Nicotinamide (Nam) and nicotinic acid as well as nicotinamide riboside (NR) and nicotinic acid riboside (NAR). These precursors are converted to the corresponding mononucleotides NMN and NAMN, which are adenylylated to the dinucleotides NAD and NAAD, respectively. Here, we have developed an NMR-based experimental approach to detect and quantify NAD(P) and its biosynthetic intermediates in human cell extracts. Using this method, we have determined NAD, NADP, NMN and Nam pools in HEK293 cells cultivated in standard culture medium containing Nam as the only NAD precursor. When cells were grown in the additional presence of both NAR and NR, intracellular pools of deamidated NAD intermediates (NAR, NAMN and NAAD) were also detectable. We have also tested this method to quantify NAD+ in human platelets and erythrocytes. Our results demonstrate that 1H NMR spectroscopy provides a powerful method for the assessment of the cellular NAD metabolome. View Full-Text
Keywords: Vitamin B3; NAD metabolome; NMR spectroscopy; human cells Vitamin B3; NAD metabolome; NMR spectroscopy; human cells
►▼ Show Figures 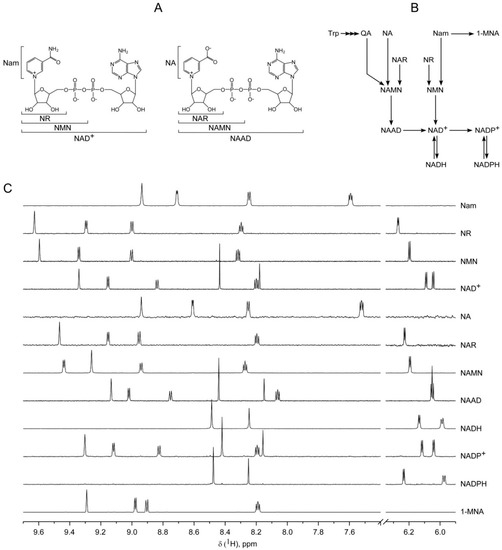