Recently, the concept of prebiotics has been revisited to expand beyond non-digestible oligosaccharides, and the requirements for selective stimulation were extended to include microbial groups other than, and additional to, bifidobacteria and lactobacilli. Here, the gut microbiota-modulating effects of well-known and novel prebiotics were studied. An in vitro fermentation screening platform (i-screen) was inoculated with adult fecal microbiota, exposed to different dietary fibers that had a range of concentrations (inulin, alpha-linked galacto-oligosaccharides (alpha-GOS), beta-linked GOS, xylo-oligosaccharides (XOS) from corn cobs and high-fiber sugar cane, and beta-glucan from oats), and compared to a positive fructo-oligosaccharide (FOS) control and a negative control (no fiber addition). All dietary fibers displayed prebiotic activity, with beta-glucan showing more distinct effects on the microbial composition and metabolism compared to the other fibers. Beta-glucan induced the growth of Prevotella and Roseburia with a concomitant increase in propionate production. Inulin and both forms of GOS and XOS had a strong bifidogenic effect on the microbial composition. A dose-response effect was observed for butyrate when exposed to beta-glucan and inulin. The findings of this study support the potential for alpha-GOS, XOS, and oat beta-glucan to serve as novel prebiotics, due to their association with the positive shifts in microbiome composition and short-chain fatty acid production that point to potential health benefits. View Full-Text
Keywords: XOS; beta-glucan; alpha-GOS; screening platform; i-screen; colonic fermentation XOS; beta-glucan; alpha-GOS; screening platform; i-screen; colonic fermentation
►▼ Show Figures 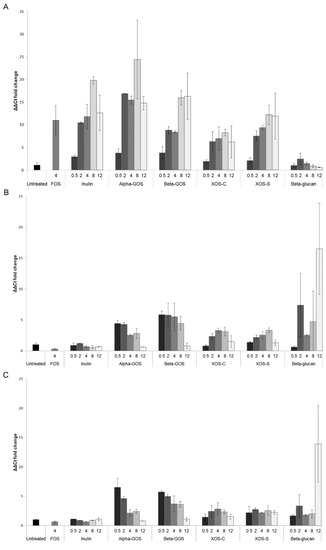