Soft-MS and Computational Mapping of Oleuropein

Two different gas chromatography coupled to quadrupole-time of flight mass spectrometry (GC-QTOF-MS) methodologies were carried out for the analysis of phytosterols and tocopherols in the flesh of three mango cultivars and their by-products (pulp, peel, and seed). To that end, a non-polar column ((5%-phenyl)-methylpolysiloxane (HP-5ms)) and a mid-polar column (crossbond trifluoropropylmethyl polysiloxane (RTX-200MS)) were used. The analysis time for RTX-200MS was much lower than the one obtained with HP-5ms. Furthermore, the optimized method for the RTX-200MS column had a higher sensibility and precision of peak area than the HP-5ms methodology. However, RTX-200MS produced an overlapping between β-sitosterol and Δ5-avenasterol. Four phytosterols and two tocopherols were identified in mango samples. As far as we are concerned, this is the first time that phytosterols have been studied in mango peel and that Δ5-avenasterol has been reported in mango pulp. α- and γ-tocopherol were determined in peel, and α-tocopherol was the major tocopherol in this fraction (up to 81.2%); however, only α-tocopherol was determined in the pulp and seed. The peel was the fraction with the highest total concentration of phytosterols followed by seed and pulp, and “Sensación” was the cultivar with the highest concentration of total phytosterols in most cases. There were no significant differences between quantification of tocopherols with both columns. However, in most cases, quantification of phytosterols was higher with RTX-200MS than with HP-5ms column. View Full-Text
Keywords: mango; GC-QTOF-MS; phytosterols; tocopherols; by-product; unsaponifiable mango; GC-QTOF-MS; phytosterols; tocopherols; by-product; unsaponifiable
►▼ Show Figures 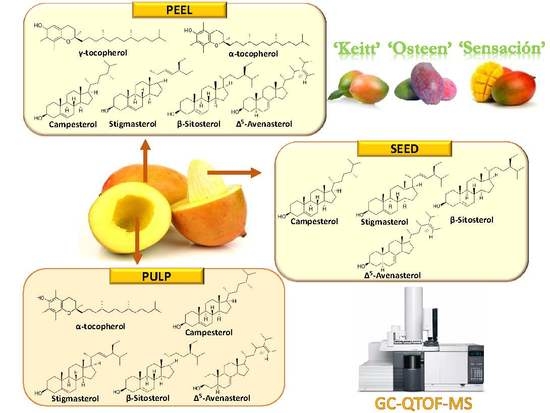 López-Cobo, A.; Martín-García, B.; Segura-Carretero, A.; Fernández-Gutiérrez, A.; Gómez-Caravaca, A.M. Comparison of Two Stationary Phases for the Determination of Phytosterols and Tocopherols in Mango and Its By-Products by GC-QTOF-MS. Int. J. Mol. Sci. 2017, 18, 1594.


López-Cobo A, Martín-García B, Segura-Carretero A, Fernández-Gutiérrez A, Gómez-Caravaca AM. Comparison of Two Stationary Phases for the Determination of Phytosterols and Tocopherols in Mango and Its By-Products by GC-QTOF-MS. International Journal of Molecular Sciences. 2017; 18(7):1594.