Post-parturient behavior of mammalian females is essential for early parent–offspring contact. After delivery, lambs need to ingest colostrum for obtaining the related immunological protection, and early interactions between the mother and the lamb are crucial. Despite visual and auditory cues, olfactory cues are decisive in lamb orientation to the mammary gland. In sheep, the inguinal sinus is located bilaterally near the mammary gland as a skin pouch (IGS) that presents a gland that secretes a strong-smelling wax. Sheep IGS gland functions have many aspects under evaluation. The objective of the present study was to evaluate sheep IGS gland functional aspects and mRNA transcription and the protein expression of several hormone receptors, such as progesterone receptor (PGR), estrogen receptor 1 (ESR1), and 2 (ESR2) and prolactin receptor (PRLR) present. In addition, another aim was to achieve information about IGS ultrastructure and chemical compounds produced in this gland. All hormone receptors evaluated show expression in IGS during the estrous cycle (follicular/luteal phases), pregnancy, and the post-partum period. IGS secretion is rich in triterpenoids that totally differ from the surrounding skin. They might be essential substances for the development of an olfactory preference of newborns to their mothers.
Keywords: inguinal sinus; morphology; transcription; ESR1; ESR2; PGR; PRLR; chemical compounds; triterpenoids inguinal sinus; morphology; transcription; ESR1; ESR2; PGR; PRLR; chemical compounds; triterpenoids

Near the mammary gland, one can observe by abduction of the hind limb the inguinal sinus located bilaterally as pockets at the external base of this gland. When exposed, a yellowish substance with a wax appearance seems to spread downward to the teats (Figure 1). The histology of the inguinal sinus demonstrates invaginated skin presenting sebaceous and acinar glandular fields, with collagen sheath fibers sustaining the secretory epithelium (Figure 2A–C). The acinar glands appear with different patterns of secretion, from a resting phase to the development of huge cellular protrusions of apocrine secretions towards the glandular lumen (for example comparing Figure 2C,F,G,H). According to dye affinities, the parenchyma is shown to be rich in glycogen (PAS; Figure 2E,F) and lipid granules (Sudan Black stain, 2 G), and mucin content as well (Alcian blue-2H-I). Myoepithelial cells can be depicted (Figure 2E). Secretion production appears with an uneven distribution in different areas of the inguinal pouch and in different acinar units, as shown in different plates of Figure 2.
Ultrastructural observations of scanning electronic microscopy (SEM) (Figure 3) showed that the apocrine glandular units are of alveolar type but not tubuloalveolar and that these secretion units appear in clusters (Figure 3A,B). Luminal surface secretion presents a paved appearance, with secretory cells in diverse stages of differentiation (Figure 3C). In fact, some acini at different stages depict fragments of secretion being “pinched off”, exhibiting secretory vesicles or secretion blebs (Figure 3D,E), although cells preserve a clear demarcation with neighboring cells by means of rows of microvilli. Apical end-pieces show a progressive filling process that upsurges as bulge-like structures. In other acini, cells appear to be in a transitional process where the clear demarcation with surrounding cells is no longer as visible, resulting from the development of apical protrusions that in a final stage denote a smooth plasma membrane devoid of microvilli and covering the protrusions (Figure 3F,H).
According to specific primer sequences used for quantitative real-time PCR (reported in Section 4), it was possible to show transcription of mRNA for ESR1, ESR2, PGR and PRLR during the follicular and mid-luteal phase of the estrous cycle (Figure 4).
Confocal scanning microscopy demonstrated immunoreactivity towards ESR1, ESR2, PGR and PLRL receptors regardless of the estrous phase or the differentiation of acini cells concerning secretion process. Evidence was found of non-nuclear estrogen receptor and PGR in a clear border basilar position (Figure 5).
Flow cytometry analysis of cell suspensions showed cells with distinct auto fluorescence levels and different behavior towards ESR1, ESR2, PRLR and PGR); (Figure 6). Along with the different estrous cycle phases studied, PRLR and ESR2 positive cell populations showed always a higher fluorescence intensity compared to PGR and ESR1 positive cells (p < 0.05). At pregnancy, PRLR also showed a higher expression (p < 0.01) in comparison with other fluorescence intensities.
Thin-layer chromatography was performed on the available set of samples (n = 28), applied semi-quantitatively. The conditions allowed for the identification of a chromatographic profile (retention factor, fluorescence) characteristic of the presence of triterpenoids, with three major bands (Figure 7, compounds 1–3) in post-partum ewes (PP), non-pregnant (NP), and pregnant ewes IGS (P). The relative intensities of these three bands in these groups of samples made it possible to infer the existence of a higher relative content of these triterpenoids in P samples, as also demonstrated in Supplementary Data.

For the present work, IGS (n = 92) were collected post mortem from adult merino ewes for different evaluations, as described below. As the reproductive history of the ewes was unknown, their estrous cycle phases were determined based on ovarian structures and plasma progesterone (P4) concentrations. Therefore, when a pre-ovulatory follicle was present in the ovary, in the absence of a corpus luteum (CL), and plasma P4 concentration was below 1 ng/mL, the ewes were considered as being in the follicular phase. Nevertheless, the presence of a CL in the ovary, and plasma P4 concentration above 1 ng/mL, indicated the ewe was in the luteal phase. Right after collection, IGS samples were immersed in (i) RNAlater (AM7020, Ambion, Applied Biosystems, Carlsbad, CA, USA) for mRNA transcription quantification; (ii) 4% buffered formaldehyde, for histology, immunohistochemistry, and confocal microscopy; (iii) Karnovsky’s solution for ultrastructure studies; or (iv) a sterile tube with RPMI 1640 (Gibco-Brl, Gaithersburg, MD, USA) for flow cytometry studies. In addition, the contents of IGS were collected into sterile tubes for biochemical quantifications. Blood samples were drawn into heparinized tubes at the time of exsanguination (MonovettesVR-Sarstedt, Numbrecht, Germany) for further estrous cycle confirmation. Furthermore, from 28 sheep (n = 8 from follicular phase, n = 10 pregnant, and n = 10 post-partum period (1–3 days after delivery)), the content of IGS obtained post mortem as a byproduct from animals used for other research purposes was collected to evaluate putative variations in secretions.
Competent veterinary authorities monitored the experiments. The ethical committee of the Faculty of Veterinary Medicine (Lisbon, Portugal) approved these. Several authors are holders of Federation of European Laboratory Animal Science Associations (FELASA) grade C certificate, which permits designing and conducting laboratory animal experimentation in the European Union.

Flow cytometry analysis of IGS was carried out to quantify the expression of ESR1, ESR2, PGR and PRLR proteins. Ewe IGS (estrus n = 14; diestrus n = 14) were removed with a surgical blade and collected in a sterile tube with 1 mL of RPMI 1640 (Gibco-Brl). After disaggregation of the tissue with a surgical blade, samples of whole IGS were centrifuged at 190 g for 10 min. Then, they were resuspended in phosphate-buffered saline solution (PBS-P3813 Sigma). Fixation and permeabilization of cell suspensions with FIX & PERM VR-Fixation and Permeabilization Kit (Invitrogen Laboratories, Life Technologies, Waltham, MA, USA) were performed for 15 min longer in the dark at room temperature. After a final washing step, the pellet was suspended once again in 500 mL of BD FACS Flow for no longer than 15 min in the dark, at room temperature. After a new washing and centrifugation step, RPE-conjugated secondary antibody (10 mL) was added and cells were incubated 15 min longer in the dark at room temperature. A final washing step was necessary, and the resulting pellet was suspended once again in 500 μL of BD FACS Flow (BD Biosciences, San Jose, CA, USA). Cell acquisition was performed on a BD FACS Calibur flow cytometer (BD Biosciences) and data were analyzed using Paint-A-Gate Pro and Cell-Quest Pro software (BD Biosciences). In each experiment, incubation of cells was done according to the above protocol but with the secondary antibody only. This control tube was performed in order to assess the level of unspecific fluorescence signal of the secondary antibody. Selection of primary antibodies’ dilutions was as follows: 1. Mouse monoclonal anti progesterone receptor (77201704 AbD Serotec, Kidlington, UK), diluted at 1:10 in PBS; 2. Mouse anti-human monoclonal antibody ESR1 (ref. 41700, Invitrogen, Dorset, UK), diluted at 1:10 in PBS; 3. Mouse anti-human polyclonal ESR2 (MCA2279S, AbD Serotec), diluted at 1:10 in PBS, 4. Mouse monoclonal (U5) to prolactin receptor (abcam 2772, Cambridge, UK), diluted at 1:10 in PBS. The secondary antibody used was R-phycoerythrin F(ab’)2 frag. of goat anti-mouse (F2653 Sigma).

The locations of ESR1, ESR2, PGR and PRLR protein in IGS were assessed using laser-scanning confocal microscopy (Leica TCS SP2, Leica Microsystems; Berlin, Germany). The same antibodies used in flow cytometry evaluation were employed in this study (n = 6). Incubation of antibodies was performed overnight with the following dilutions: (1) Mouse monoclonal anti-progesterone receptor diluted at 1:50; (2) estrogen receptor (ESR1) diluted at 1:50 and rabbit anti-human estrogen receptor (ESR2) diluted at 1:50. Again, the FIX & PERM VR Fixation and Permeabilization Kit (Invitrogen Laboratories, Life Technologies, Waltham, MA, USA) was used. Briefly, reagent A was added for no longer than 15 min in the dark at room temperature before the addition of the primary antibody, which was incubated for an hour. For another 15 min, solution B was added followed by the addition of the second antibody.
To-Pro-3 iodide 1 mM solution (Invitrogen Molecular Probes, Eugene, OR, USA) was used for nuclear counterstaining. Negative controls were performed by replacing the primary antibody with either rabbit polyclonal IgG (ab27478, Abcam), for antibodies developed in a rabbit, or mouse IgG (550878, BD Biosciences, San Jose, CA, USA) for antibodies developed in a mouse, with the same dilution and incubation times as the primary antibody, followed by To-Pro-3 iodide for nuclear counterstaining. Selected sections were photographed with confocal laser microscopy, Leica TCS SP2.

Flow cytometry data of ERSR1, ESR2, PRLR, and PGR proteins in IGS from ewes in the follicular, luteal, pregnancy, and post-partum phases, were subjected to a one-way analysis of variance (ANOVA). Significance was defined as values of p < 0.05. For statistically different results, the means were further analyzed by post hoc comparison test, such as LSD (least significant differences) and Scheffé tests (probabilities for post hoc tests).

Our data, to the best of our knowledge, have not been reported elsewhere. These findings concern the expression of steroid hormones and prolactin receptors in sheep IGS and point out that a particular triterpenoid-rich secretion and organic nitrogen compounds that totally differ from the surrounding skin are present in IGS. These secretions show modifications, particularly during pregnancy and post-partum. Altogether, IGS secretion in the ewe might contribute to the putative involvement of this gland in the signaling cues that direct the lamb to the mammary gland.
Since impairment of bond formation between ewes and their offspring is a common cause of offspring death, this research will potentially benefit farmers by contributing to the increased survival of lambs due to understanding and using these odor products. As stated, IGS fluctuations in the expression of ERS1, ERS2, PGR, and PRLR are present and might be linked to putative chemosignals. Further research by our team will give rise to new data regarding a direct hormonal cause/effect on IGS, in agreement with other researchers who claim to have achieved methods of manipulating reproduction in domestic ungulates by using specific odors.

Funding for this work was provided by the Portuguese Foundation for Science and Technology (FCT) with co-participation of European Union Fund (FEDER) through the research project UID/CVT/00276/2013. The authors present special thanks to Sandra Carvalho and Rosário Luís (Histology Dept., FMV) and Gloria Nunes (Immunology Dept., FCM) for technical assistance. 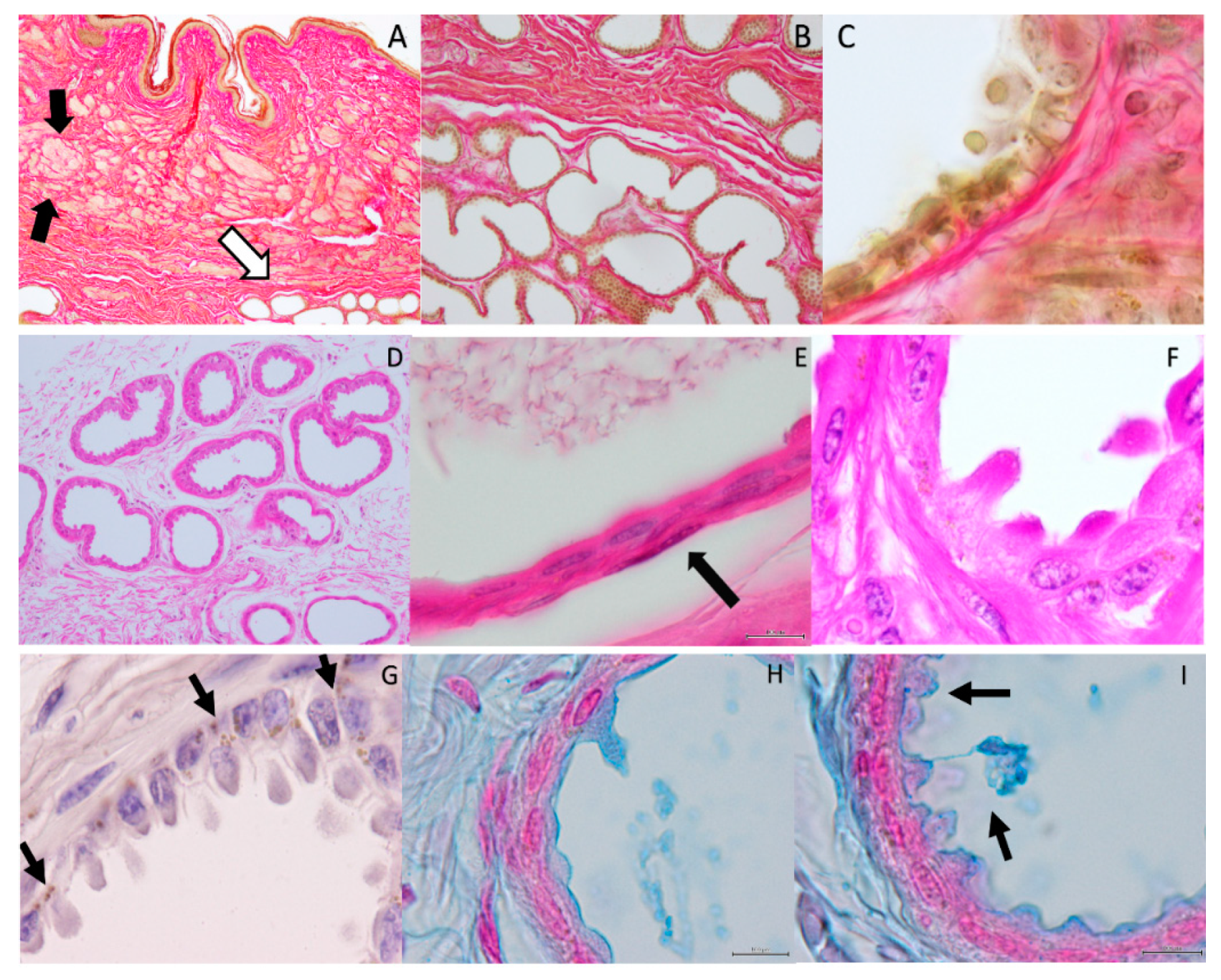 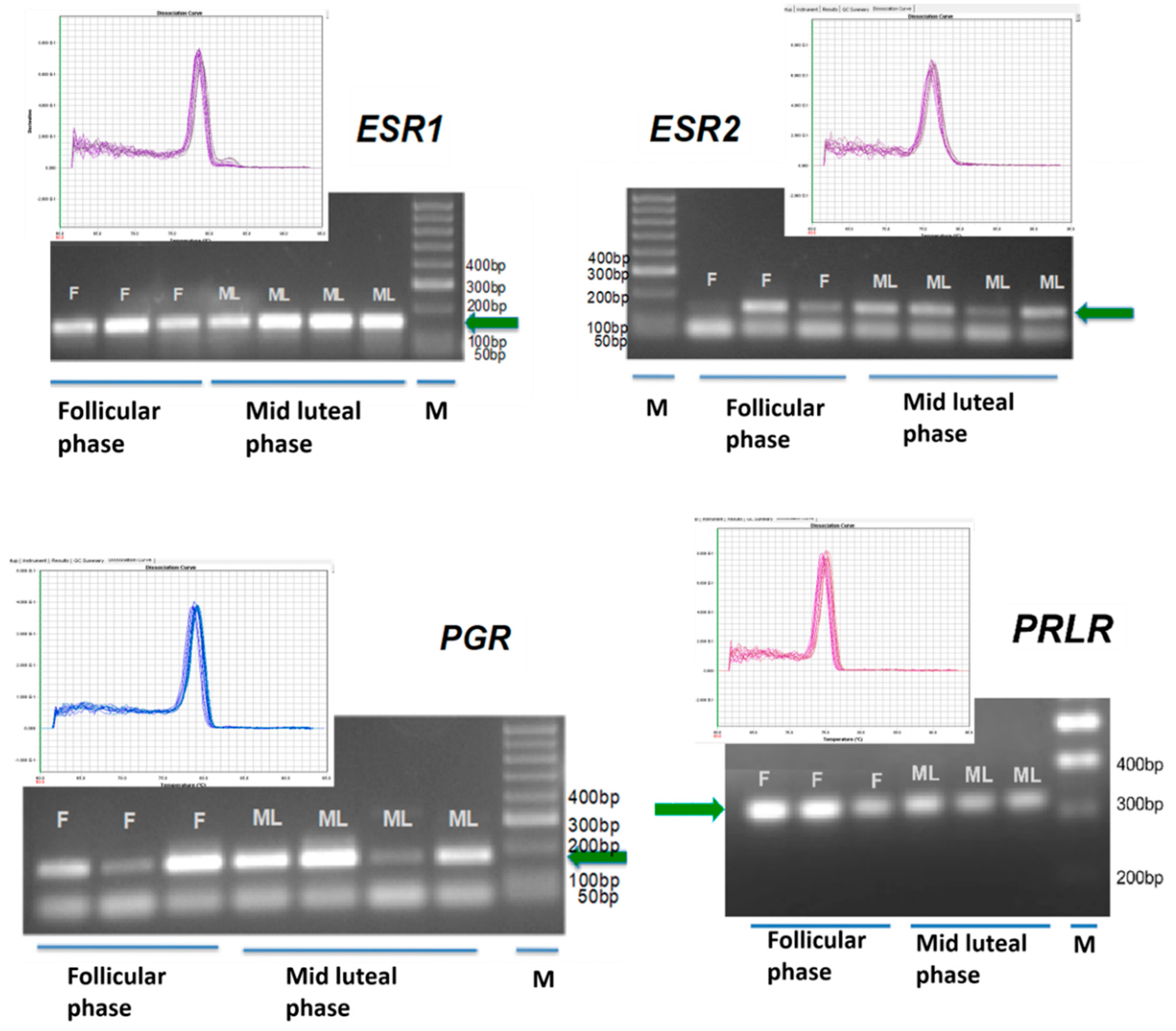 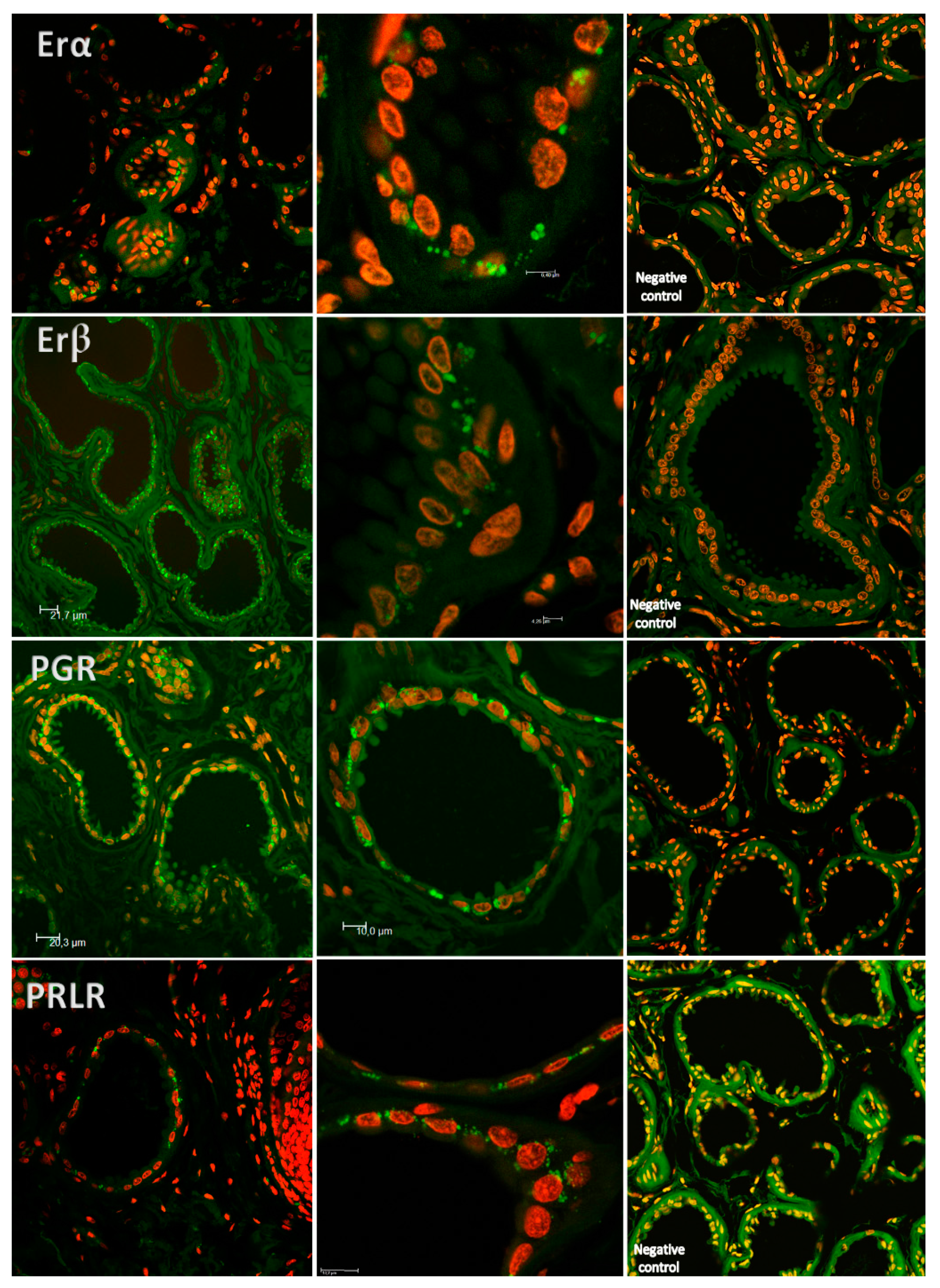