The Peculiar Glycolytic Pathway in Hyperthermophylic Archaea: Understanding Its Whims by Experimentation In Silico
Next Article in Special Issue

Tubacin, an HDAC6 Selective Inhibitor, Reduces the Replication of the Japanese Encephalitis Virus via the Decrease of Viral RNA Synthesis
Previous Article in Journal

Hepatitis E virus (HEV) is a major cause of viral hepatitis globally. Zoonotic HEV is an important cause of chronic hepatitis in immunocompromised patients. The rapid identification of novel HEV variants and accumulating sequence information has prompted significant changes in taxonomy of the family Hepeviridae. This family includes two genera: Orthohepevirus, which infects terrestrial vertebrates, and Piscihepevirus, which infects fish. Within Orthohepevirus, there are four species, A–D, with widely differing host range. Orthohepevirus A contains the HEV variants infecting humans and its significance continues to expand with new clinical information. We now recognize eight genotypes within Orthohepevirus A: HEV1 and HEV2, restricted to humans; HEV3, which circulates among humans, swine, rabbits, deer and mongooses; HEV4, which circulates between humans and swine; HEV5 and HEV6, which are found in wild boars; and HEV7 and HEV8, which were recently identified in dromedary and Bactrian camels, respectively. HEV7 is an example of a novel genotype that was found to have significance to human health shortly after discovery. In this review, we summarize recent developments in HEV molecular taxonomy, epidemiology and evolution and describe the discovery of novel camel HEV genotypes as an illustrative example of the changes in this field. View Full-Text
Keywords: hepatitis E; zoonosis; hepatitis; taxonomy; molecular evolution; molecular epidemiology; genotypes; dromedary camel; Bactrian camel; swine hepatitis E; zoonosis; hepatitis; taxonomy; molecular evolution; molecular epidemiology; genotypes; dromedary camel; Bactrian camel; swine
►▼ Show Figures 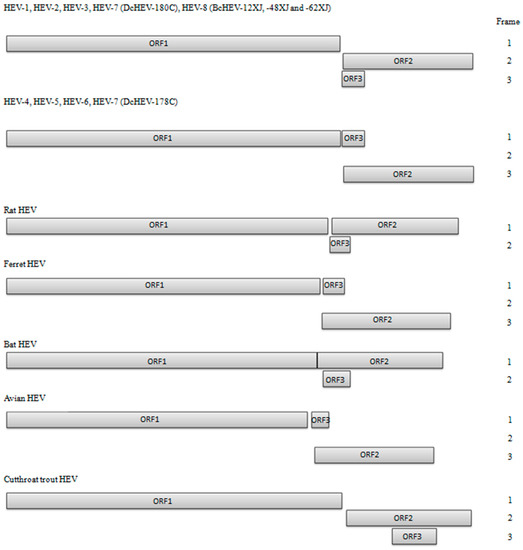