In-Depth Lipidomic Analysis of Molecular Species of Triacylglycerides, Diacylglycerides, Glycerophospholipids, and Sphingolipids of Buttermilk by GC-MS/FID, HPLC-ELSD, and UPLC-QToF-MS
Next Article in Special Issue

The flavin adenine dinucleotide-dependent glucose dehydrogenase (FAD-GDH) from Aspergillus species require suitable redox mediators to transfer electrons from the enzyme to the electrode surface for the application of bioelectrical devices. Although several mediators for FAD-GDH are already in use, they are still far from optimum in view of potential, kinetics, sustainability, and cost-effectiveness. Herein, we investigated the efficiency of various phenothiazines and quinones in the electrochemical oxidation of FAD-GDH from Aspergillus terreus. At pH 7.0, the logarithm of the bimolecular oxidation rate constants appeared to depend on the redox potentials of all the mediators tested. Notably, the rate constant of each molecule for FAD-GDH was approximately 2.5 orders of magnitude higher than that for glucose oxidase from Aspergillus sp. The results suggest that the electron transfer kinetics is mainly determined by the formal potential of the mediator, the driving force of electron transfer, and the electron transfer distance between the redox active site of the mediator and the FAD, affected by the steric or chemical interactions. Higher k2 values were found for ortho-quinones than for para-quinones in the reactions with FAD-GDH and glucose oxidase, which was likely due to less steric hindrance in the active site in the case of the ortho-quinones. View Full-Text
Keywords: flavin adenine dinucleotide; glucose dehydrogenase; phenothiazine; quinone; redox mediator flavin adenine dinucleotide; glucose dehydrogenase; phenothiazine; quinone; redox mediator
►▼ Show Figures 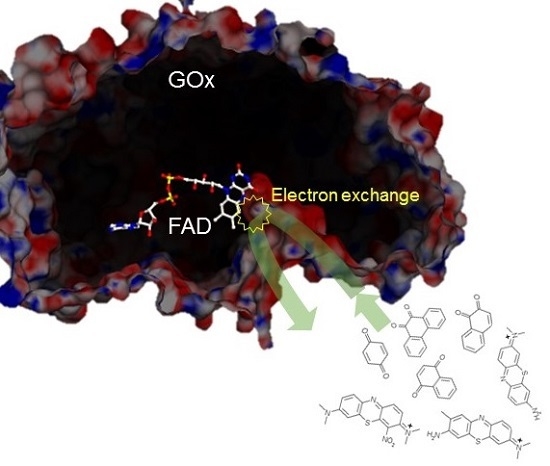