Azacitidine for Front-Line Therapy of Patients with AML: Reproducible Efficacy Established by Direct Comparison of International Phase 3 Trial Data with Registry Data from the Austrian Azacitidine Registry of the AGMT Study Group
Previous Article in Journal

The Search for Dietary Supplements to Elevate or Activate Circulating Paraoxonases

Low levels of paraoxonase 1 (PON1) have been associated with the development of several pathological conditions, whereas high levels have been shown to be anti-atherosclerotic in mouse models. These findings suggest that PON1 could be a good surrogate biomarker. The other members of the family, namely PON2 and PON3, the role of which has been much less studied, deserve more attention. This paper provides a systematic review of current evidence concerning dietary supplements in that regard. Preliminary studies indicate that the response to dietary supplements may have a nutrigenetic aspect that will need to be considered in large population studies or in clinical trials. A wide range of plant preparations have been found to have a positive action, with pomegranate and some of its components being the best characterized and Aronia melanocarpa one of the most active. Flavonoids are found in the composition of all active extracts, with catechins and genistein being the most promising agents for increasing PON1 activity. However, some caveats regarding the dose, length of treatment, bioavailability, and stability of these compounds in formulations still need to be addressed. Once these issues have been resolved, these compounds could be included as nutraceuticals and functional foods capable of increasing PON1 activity, thereby helping with the long-term prevention of atherosclerosis and other chronic ailments. View Full-Text
Keywords: paraoxonase 1; paraoxonase 2; catechins; genistein; plant extracts; atherosclerosis paraoxonase 1; paraoxonase 2; catechins; genistein; plant extracts; atherosclerosis
►▼ Show Figures 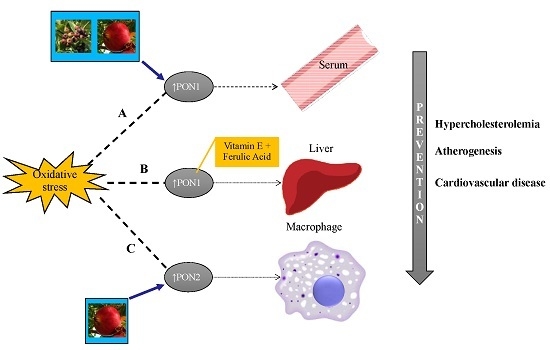