Femtograms of Interferon-γ Suffice to Modulate the Behavior of Jurkat Cells: A New Light in Immunomodulation
Previous Article in Special Issue

p.R375W (Fibrinogen Aguadilla) is one out of seven identified mutations (Brescia, Aguadilla, Angers, Al du Pont, Pisa, Beograd, and Ankara) causing hepatic storage of the mutant fibrinogen γ. The Aguadilla mutation has been reported in children from the Caribbean, Europe, Japan, Saudi Arabia, Turkey, and China. All reported children presented with a variable degree of histologically proven chronic liver disease and low plasma fibrinogen levels. In addition, one Japanese and one Turkish child had concomitant hypo-APOB-lipoproteinemia of unknown origin. We report here on an additional child from Turkey with hypofibrinogenemia due to the Aguadilla mutation, massive hepatic storage of the mutant protein, and severe hypo-APOB-lipoproteinemia. The liver biopsy of the patient was studied by light microscopy, electron microscopy (EM), and immunohistochemistry. The investigation included the DNA sequencing of the three fibrinogen and APOB–lipoprotein regulatory genes and the analysis of the encoded protein structures. Six additional Fibrinogen Storage Disease (FSD) patients with either the Aguadilla, Ankara, or Brescia mutations were investigated with the same methodology. A molecular analysis revealed the fibrinogen gamma p.R375W mutation (Aguadilla) but no changes in the APOB and MTTP genes. APOB and MTTP genes showed no abnormalities in the other study cases. Light microscopy and EM studies of liver tissue samples from the child led to the demonstration of the simultaneous accumulation of both fibrinogen and APOB in the same inclusions. Interestingly enough, APOB-containing lipid droplets were entrapped within the fibrinogen inclusions in the hepatocytic Endoplasmic Reticulum (ER). Similar histological, immunohistochemical, EM, and molecular genetics findings were found in the other six FSD cases associated with the Aguadilla, as well as with the Ankara and Brescia mutations. The simultaneous retention of fibrinogen and APOB-lipoproteins in FSD can be detected in routinely stained histological sections. The analysis of protein structures unraveled the pathomorphogenesis of this unexpected phenomenon. Fibrinogen gamma chain mutations provoke conformational changes in the region of the globular domain involved in the “end-to-end” interaction, thus impairing the D-dimer formation. Each monomeric fibrinogen gamma chain is left with an abnormal exposure of hydrophobic patches that become available for interactions with APOB and lipids, causing their intracellular retention and impairment of export as a secondary unavoidable phenomenon. View Full-Text
Keywords: Fibrinogen Storage Disease; APOB-lipoprotein; Endoplasmic Reticulum Storage Disease Fibrinogen Storage Disease; APOB-lipoprotein; Endoplasmic Reticulum Storage Disease
►▼ Show Figures 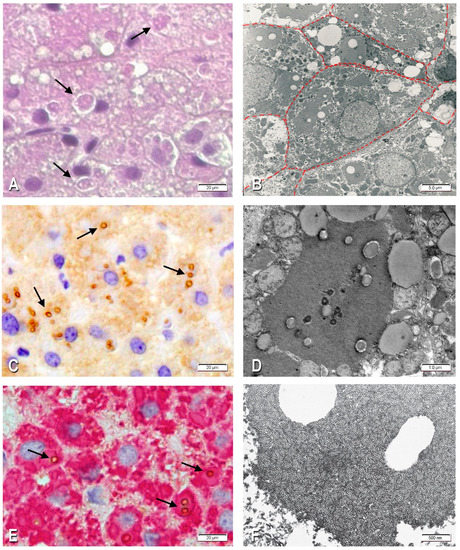