Impact of Omega-3 Fatty Acids on the Gut Microbiota

Long-term dietary habits play a crucial role in creating a host-specific gut microbiota community in humans. Despite the many publications about the effects of carbohydrates (prebiotic fibers), the impact of dietary fats, such as omega-3 polyunsaturated fatty acids (PUFAs), on the gut microbiota is less well defined. The few studies completed in adults showed some common changes in the gut microbiota after omega-3 PUFA supplementation. In particular, a decrease in Faecalibacterium, often associated with an increase in the Bacteroidetes and butyrate-producing bacteria belonging to the Lachnospiraceae family, has been observed. Coincidentally, a dysbiosis of these taxa is found in patients with inflammatory bowel disease. Omega-3 PUFAs can exert a positive action by reverting the microbiota composition in these diseases, and increase the production of anti-inflammatory compounds, like short-chain fatty acids. In addition, accumulating evidence in animal model studies indicates that the interplay between gut microbiota, omega-3 fatty acids, and immunity helps to maintain the intestinal wall integrity and interacts with host immune cells. Finally, human and animal studies have highlighted the ability of omega-3 PUFAs to influence the gut–brain axis, acting through gut microbiota composition. From these findings, the importance of the omega-3 connection to the microbiota emerges, encouraging further studies.
Keywords: omega-3 PUFAs; DHA; EPA; gut microbiota; dysbiosis; inflammation; behavioral disorders omega-3 PUFAs; DHA; EPA; gut microbiota; dysbiosis; inflammation; behavioral disorders

In the last few years, the emergence and growing accessibility of next-generation sequencing (NGS) technologies have allowed advances in the understanding of the composition and functional activity of the gut microbial community. Approximately 100 papers on gut microbiota were published in 2007, whereas about 3000 such studies were published in 2016, and almost the same number to date in 2017 (research performed by setting the words “gut” and “microbiota” in October 2017 on PubMed and Scopus). The importance of using NGS technology is due to the necessity of simultaneous analysis of a large amount of genetic material. Indeed, overall, the gut microbiota is estimated to contain 150 times more genes than the human genome. These genes have been estimated to belong to approximately 1013–1014 microbes, with a species diversity of up to several hundred per individual [1]. However, The Human Microbiota Project and other studies have collectively found that thousands of different species may inhabit the human gut, pointing out the high degree of taxa variation in the microbiota composition of different populations. Despite this variation, the human gut microbiota is characterized by some basic similarities. Approximately 60% of the gut bacteria belong to the Bacteroidetes and Firmicutes phyla, and, among them, Bifidobacterium, Lactobacillus, Bacteroides, Clostridium, Escherichia, Streptococcus, and Ruminococcus are the most commonly found genera in adults [2]. However, several factors influence the bacterial composition in taxa type and abundance, making the total gut microbiota profile host-specific in humans. These factors include host phenotype, such as age, gender, body mass index (BMI), lifestyle, and immune function; geographical belonging and environmental factors; use of antibiotics, drugs, and probiotics; and diet.
The causal relationship between the gut microbiota and overall pathological conditions is still unclear. Indeed, it is still unclear whether a disease-prone microbial composition exists (so-called dysbiosis) or whether the changes in the microbial community occur after the onset of the disease [3]. Conversely, diet undoubtedly influences the composition of gut microbiota, providing nutrients for both the host and the bacteria. This gut community has many degrading enzymes and metabolic capabilities that are able to break down macromolecules into smaller chemical compounds, which can then be uptaken by enterocytes [4]. Moreover, long-term dietary habits have been shown to play a crucial role in creating an inter-individual variation in microbiota composition [5]. However, despite the great number of publications on the effects of carbohydrates, the impacts of dietary fats and protein on the gut microbiota are less well defined. In particular, gut microbiota changes associated with omega-3 fatty acids are poorly understood.
Among the omega-3 polyunsaturated fatty acids (PUFAs), eicosapentaenoic acid (EPA, C20:5) and docosahexaenoic acid (DHA, C22:6) are the two main bioactive forms in humans. These fatty acids can be synthesized from the dietary precursor and essential fatty acid, α-linolenic acid (ALA, C18:3). However, the synthesis pathway requires several elongation and desaturation chemical reactions, so that the conversion of the two active forms in mammals is less efficient than dietary uptake. For this reason, consumption of EPA- and DHA-rich foods is recommended. However, since foods rich in these fatty acids are not widespread, EPA and DHA are widely used as nutritional supplements, often as nutraceuticals. Several papers have demonstrated the correlation between omega-3 PUFAs and the inflammatory response. Although the literature on this topic is discordant, omega-3 PUFAs are generally associated with anti-inflammatory effects, in comparison with the omega-6 PUFAs that are linked to pro-inflammatory effects, due to the different downstream lipid metabolites [6]. Also, with regards to the link to immunity, studies have shown that the supplementation of omega-3 PUFAs provides multiple health benefits against different chronic degenerative diseases, such as cardiovascular diseases [7], rheumatoid arthritis [8], inflammatory bowel disease (IBD) [9], depression [10], and cancer [11].
Considering the few insights existing in literature, in the present review, we assessed whether omega-3 PUFAs have an impact on the composition of the human gut microbiota in adults and infants. Moreover, a connection of this topic to inflammation and behavioral disorders was completed.

2. Omega-3 Influence on Human Gut Microbiota: State of the Art

The evidence is growing for a correlation between gut microbiota dysbiosis and pathological status. In particular, some metabolic disorders of the host are thought to be associated with an inflammation-related composition of the gut microbiota. Different bacterial taxa modulate immune functionality that can play pro- and anti-inflammatory roles, and, thus, the composition of the microbiota community determines, in part, the level of resistance to infection and susceptibility to inflammatory diseases. Omega-3 PUFAs exert significant effects on the intestinal environment; on mood and cognitive functioning, such as anxiety and depression; and modulating the gut microbiota composition (Figure 1). In summary, based on conducted studies, the omega-3 PUFAs can be considered prebiotics. Therefore, the consumption of an omega-3-rich diet has been thought to be beneficial for health, but the gut microbiota changes in humans associated with omega-3 PUFAs are poorly understood. Future research with well-conducted clinical trials is needed to analyze the relationships between omega-3 PUFAs and the gut microbiota. 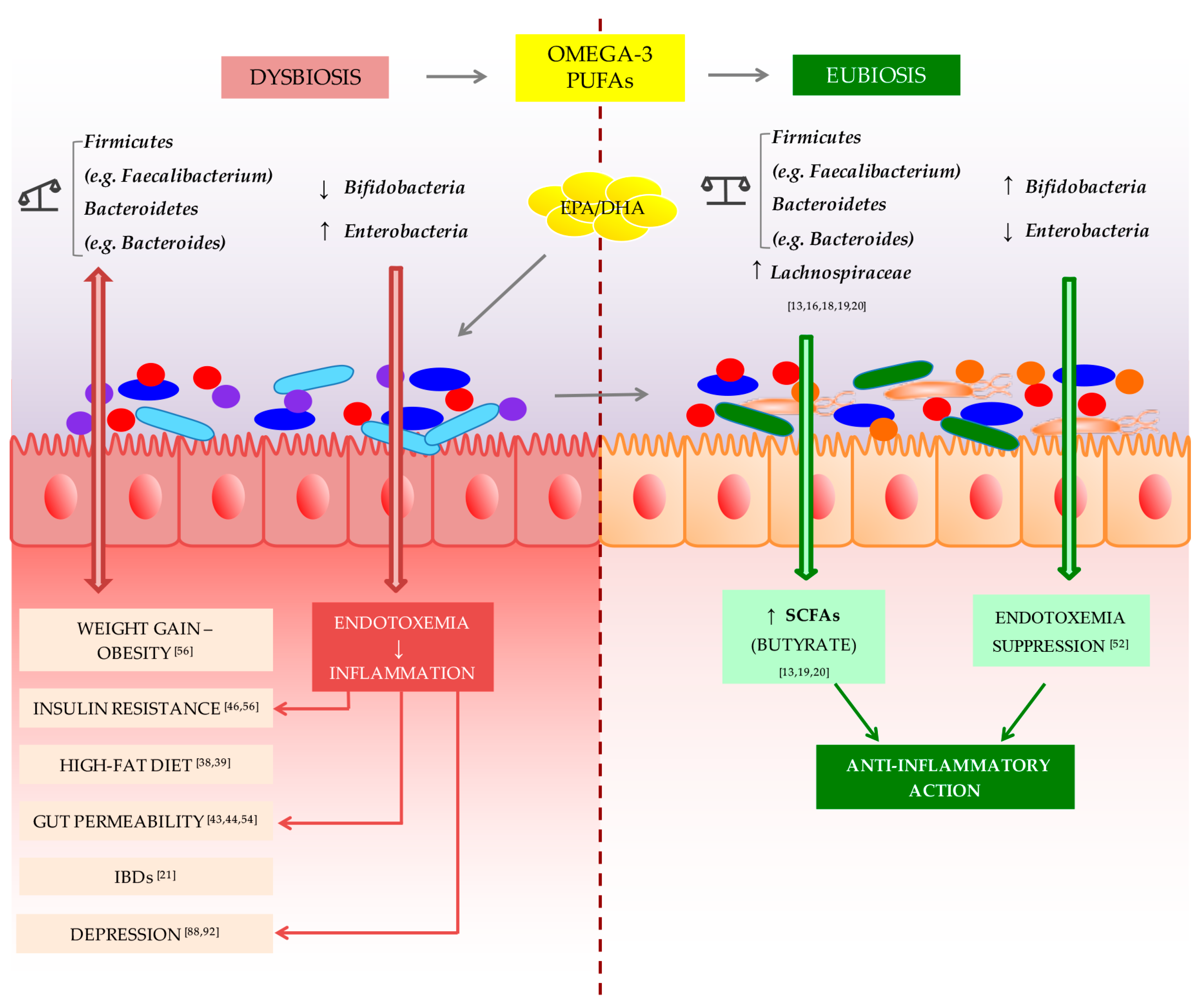