Whole-Genome Re-Alignment Facilitates Development of Specific Molecular Markers for Races 1 and 4 of Xanthomonas campestris pv. campestris, the Cause of Black Rot Disease in Brassica oleracea
Previous Article in Special Issue

Green Routes for the Production of Enantiopure Benzylisoquinoline Alkaloids

Maize (Zea mays L.) is a staple food in many parts of Africa, but the endosperm generally contains low levels of the pro-vitamin A carotenoid β-carotene, leading to vitamin A deficiency disease in populations relying on cereal-based diets. However, maize endosperm does accumulate high levels of other carotenoids, including zeaxanthin, which is derived from β-carotene via two hydroxylation reactions. Blocking these reactions could therefore improve the endosperm β-carotene content. Accordingly, we used RNA interference (RNAi) to silence the endogenous ZmBCH1 and ZmBCH2 genes, which encode two non-heme di-iron carotenoid β-hydroxylases. The genes were silenced in a range of maize genetic backgrounds by introgressing the RNAi cassette, allowing us to determine the impact of ZmBCH1/ZmBCH2 silencing in diverse hybrids. The β-carotene content of the endosperm increased substantially in all hybrids in which ZmBCH2 was silenced, regardless of whether or not ZmBCH1 was silenced simultaneously. However, the β-carotene content did not change significantly in C17 hybrids (M7 × C17 and M13 × C17) compared to C17 alone, because ZmBCH2 is already expressed at negligible levels in the C17 parent. Our data indicate that ZmBCH2 is primarily responsible for the conversion of β-carotene to zeaxanthin in maize endosperm. View Full-Text
Keywords: maize (Zea mays L.); β-carotene; carotenoid β-hydroxylase; RNAi; hybrid maize (Zea mays L.); β-carotene; carotenoid β-hydroxylase; RNAi; hybrid
►▼ Show Figures 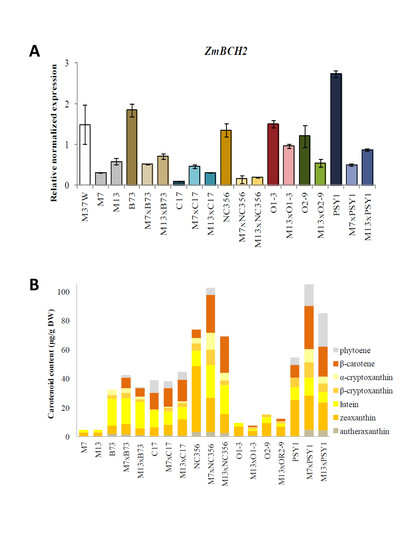