Latent transforming growth factor-β-1 binding protein-2 (LTBP-2) belongs to the LTBP-fibrillin superfamily of extracellular proteins. Unlike other LTBPs, LTBP-2 does not covalently bind transforming growth factor-β1 (TGF-β1) but appears to be implicated in the regulation of TGF-β1 bioactivity, although the mechanisms are largely unknown. In experiments originally designed to study the displacement of latent TGF-β1 complexes from matrix storage, we found that the addition of exogenous LTBP-2 to cultured human MSU-1.1 fibroblasts caused an increase in TGF-β1 levels in the medium. However, the TGF-β1 increase was due to an upregulation of TGF-β1 expression and secretion rather than a displacement of matrix-stored TGF-β1. The secreted TGF-β1 was mainly in an inactive form, and its concentration peaked around 15 h after addition of LTBP-2. Using a series of recombinant LTBP-2 fragments, the bioactivity was identified to a small region of LTBP-2 consisting of an 8-Cys motif flanked by four epidermal growth factor (EGF)-like repeats. The LTBP-2 stimulation of TGF-β expression involved the phosphorylation of both Akt and p38 mitogen-activated protein kinase (MAPK) signalling proteins, and specific inactivation of each protein individually blocked TGF-β1 increase. The search for the cell surface receptor mediating this LTBP-2 activity proved inconclusive. Inhibitory antibodies to integrins β1 and αVβ5 showed no reduction of LTBP-2 stimulation of TGF-β1. However, TGF-β1 upregulation was partially inhibited by anti-αVβ3 integrin antibodies, suggestive of a direct or indirect role for this integrin. Overall, the study indicates that LTBP-2 can directly upregulate cellular TGF-β1 expression and secretion by interaction with cells via a short central bioactive region. This may be significant in connective tissue disorders involving aberrant TGF-β1 signalling. View Full-Text
Keywords: LTBP-2; TGF-β; fibroblast; p38 MAPK; Akt; fibrosis LTBP-2; TGF-β; fibroblast; p38 MAPK; Akt; fibrosis
►▼ Show Figures 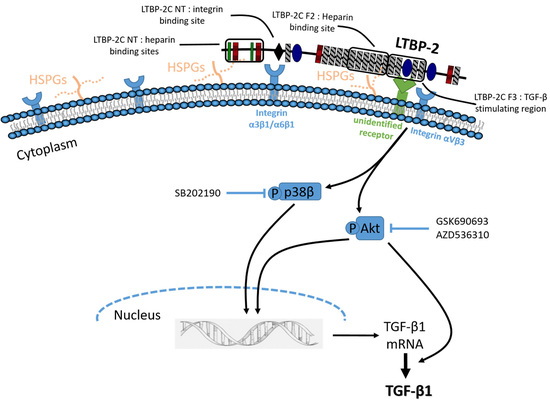