Currently, gold nanoparticles (AuNPs) of different size and shape are often used as photosensitizers for cancer plasmonic photothermal (PPT) therapy [1,2], for cell optoporation [3,4] and pathogen killing [5]. It is mandatory to analyze the underlying mechanisms to increase the selectivity of AuNP accumulation in tumors, to enhance treatment efficiency and photo-cytotoxicity, as well as to study other critical effects of laser radiation and AuNPs interaction with tissues and cells that are of great importance for laser treatments.
Progress in the application of plasmonic AuNPs for laser hyperthermia of tumor tissues is due to the multiplicative effects of increased local absorption of laser radiation by plasmonic AuNPs [6] and their targeted delivery [7]. The combined impact of these factors has revolutionized the traditional and widespread laser hyperthermia of tissues. To take advantage of these mechanisms, it is necessary to develop multi-scale models and methods for calculation of the temperature fields on macro- and micro-scales. Furthermore, the models should be adopted for practical application to large size objects at the second- and minute-time scale, whereas the nano-, pico- and femtosecond laser pulses are applied to individual particles. Recently, significant advances were achieved in the development of mathematical modeling methods of photothermal effects of nanoparticles (NPs) in tissues and cells [8,9]. It was shown that local inhomogeneities of the temperature fields lead to new laws of the distribution and dynamics of the Arrhenius damage integral [10,11], which provide a more appropriate selection of nanoparticle dimension and light exposure to gain precise control of hyperthermia with minimal energy consumption.
Laser induced cell optoporation by local heating of AuNPs was proven to be a promising approach to deliver exogenous molecules into cells. Theoretical estimations were used to build a strategy to increase laser cell membrane optoporation efficiency that strongly depends on the laser beam intensity and AuNP optical and thermal properties [12,13]. To achieve the optimal AuNP–cell interaction, sphere-, rod- and star-shaped AuNPs with the different plasmon-resonant peaks were fabricated and functionalized with different ligands [14,15].
One of the potential applications of AuNPs is to kill pathogens, as well as to regulate the number of opportunistic microorganisms. Many differently structured AuNPs have been studied to potentiate antimicrobial PDT by improving photosensitizer solubility, photochemistry, photophysics and targeting [16,17]. Potential ways to improve method are to increase local concentration of the photosensitizer via targeted delivery of nanoparticles, to provide selective interaction with the cell wall of bacteria, and the resonance NP heating under laser radiation.
Currently, the practice of cancer plasmonic photothermal (PTT) and photodynamic (PDT) therapies has advanced in leaps and bounds due to the wide application of multifunctional plasmonic nanocomposites (NCs) and fluorescent photodynamic molecules. Unfortunately, a porphyrin-based PDT can be practical only for tumors on or under the skin or mucosa of the oral or internal organs, as it absorbs light wavelengths of less than 640 nm [18]. The usage of gold NCs for effective laser heating and photodynamic impact on tumor tissue was demonstrated recently [19,20]. Nevertheless, further studies are needed to improve the therapeutic protocols by adjusting light delivery, its power density, and irradiation doses.
In this review, we summarize our recent theoretical, experimental, and preclinical results on light activated interaction of AuNPs with tissues and cells. Specifically, we discuss a combined PPT/PDT treatment of tumors and killing of pathogenic bacteria with gold-based nanocomposites and atomic clusters, cell optoporation, and theoretical simulations of nanoparticle-mediated laser heating of tissues and cells.

2. Nanocomposites Based on Au Nanoparticles and Nanoclusters

Recently, there has been significant progress in the development of theoretical analysis methods for examining the photothermal effects of nanoparticles (NPs) on tissues and cells [45,46,47,48,49,50,51,52,53,54,55,56]. The general scheme of the theoretical modeling [47,52,53,54,55] is shown in Figure 2.
The thermal response on the laser irradiation can be found from the solution of the heat equation [47,53,55]
Here, c, ρ and k are the values of specific heat, mass density and thermal conductivity, respectively; T is the temperature; t is the time. The solution of Equation (1) must satisfy the condition of continuity of temperature and normal component of heat flux at the boundaries of the contacting media.
A two-scale approach for calculation of kinetics of photo-induced temperature fields has been recently proposed [55,56]:

(i)
Macroscale model is valid for mean temperature fields analysis in the spatially extended regions of tissues doped by assembles of plasmonic nanoparticles. In this case, the values T, c, ρ, k in Equation (1) should be considered as corresponding variables averaged over physically small volumes containing, at the same time, a sufficiently large number of nanoparticles.
(ii)
Microscale model is valid for calculation of the small-scale spatial inhomogeneity of the temperature field within a nanoparticle itself and its vicinity. It means the exact local values of the variables T and other variables should be considered in Equation (1). This is important, e.g., for the study of cell membrane optoporation or transfection.

The example of simulations for Model (i) is presented in Figure 3.
Figure 4a represents [52] the distribution of the dimensionless value—efficiency of absorption versus radius R of Au spherical nanoparticle of the volume V = 4πR3/3 irradiated by laser light of wavelength λ and intensity I. The corresponding distribution of the steady state temperature increment ΔT within the Model (ii) for I = 100 kW/cm2 is depicted in Figure 4b.
The short laser pulse model (ii) was developed as well. Under this approach, a novel thermal effect, which is a hoop-shaped hot zone formation on the surface of irradiated nanoshell, was found [53] (see Figure 5). The time of “life” of the hot zone is less than a nanosecond for the considered nanoshell size.

The irreversible thermal damage of a particular type of a tissue or a cell is described by the condition for Arrhenius damage function or integral [46,47]:
Here, τ is the exposure time, Rg = 8.314 J/(mol·K) is the gas constant.
For calculations, parameter A = 3.1 × 1098 s−1 and the activation energy Ea = 6.3 × 105 J/mol that characteristic for damage of porcine skin were used. Laser-irradiated AuNP creates a localized heated region in the surrounding medium. From Equation (2), the maximal allowed exposure time τ exceeding which leads to local destruction (damage) of cell membrane or tissue component can be determined [47].
A study of impact of AuNP size and laser pulse duration on the temperature jump and damage function is of undoubted practical interest. Figure 6 shows temporal dependences of the temperature on the surface of a 50 nm-AuNP at different pulse duration τp which varies from 0.0001 to 1 µs [52]. The time t in Figuare 6a is normalized to pulse duration τp. This allows for a graphical presentation in a single scale of relative time, time/pulse duration, and differently scaled temporal processes. The reduction of τp leads to a monotonic, however disproportional, decrease of maximal temperature jump ΔTmax at a similar laser intensity.
It is evident that the Arrhenius function Ω for various τp differs significantly due to two major factors, the maximal temperature rise ΔTmax and duration of the elevated temperature of the biological object, which both contribute simultaneously. It should be noted that the analysis would be more objective if the comparison were to be carried out for a similar ΔTmax. A natural way to increase ΔTmax with a decrease of τp is the use of lasers with higher power densities. The required increase of the laser power to create an equivalent temperature effect can be estimated from data presented in Figure 6b. It is equally important to estimate the laser pulse energy E, which is required for the equivalent thermal exposure. Figure 6c, built in the coordinates “Normalized energy E/E0—Pulse duration τp”, shows that larger AuNPs have the advantage of better energy efficiency compared to small-sized nanoparticles.
The results of calculations of ΔT and Ω for AuNPs (R = 50 nm, τp = 1 µs) and (R = 10 nm, τp = 0.1 µs) are shown in Figure 7 [52]. These AuNPs have a similar maximal pulse temperature received for the identical energy of the laser pulse. However, the increment of the Arrhenius function Ω, provided by AuNP with R = 50 nm and a longer pulse is almost an order of magnitude higher.
Results of this study show that the choice of NP size and laser pulse duration could provide a precise control of a local tissue/cell hyperthermia. At the same time, for both, the criteria for optimization are energy transform efficiency and economic feasibility. We see that the similar effects are achievable when using expensive femtosecond or relatively cheap nanosecond laser systems.

The therapeutic efficacy of only PDT in cancer treatment is limited because of the inadequate selectivity of most photosensitizers and their poor solubility and rapid destruction under light exposure. A combination of photodynamic therapy (PDT) and photothermal therapy (PTT) may become a universal and gentle tool for biomedical applications in the near future, which allows one to avoid side effects and the development of resistance to drugs. Development of AuNP-based nanocomposites combined with PDT agents can improve the effectiveness of both PDT and combined therapies.
Currently, integrative approaches are required for precise control of laser thermal action of PTT with nanoscale/femtosecond resolution, which combined existing cutting-edge and newly developed methods for mathematical modeling of the optical and thermal properties of nanoparticle-containing medium. A general conclusion can be made about the significance of size-dependent distribution of AuNPs to provide optimal local laser hyperthermia of cells and tissues. The use in numerical simulations of the Arrhenius damage integral allowed us to make a more reasonable choice of the nanoparticle size and irradiation mode to precisely control hyperthermia with minimal energy consumption.
The proposed approaches can be used for prognosis and monitoring of local hyperthermia caused by application of nanophotosensitizers of different shapes/structures and laser irradiation.
Furthermore, the considered theoretical and experimental reports can be useful for a better understanding of new applications of AuNPs to pathogen killing or PTT/PDT treatment of tumors. Further studies are needed to develop a robust and effective strategy for delivery of AuNPs and related composites to tumor tissue, thus ensuring an effective dual PTT/PDT effect.
We have evaluated the cell membrane optoporation percentage in in vitro experiments in terms of fluorescent dye permeability under CW and nanosecond (ns) pulse laser treatments. Differently-shaped AuNPs as nanospheres, nanorods and nanostars with various plasmon-resonant peaks were fabricated and functionalized with different ligands to achieve the optimal AuNP–cell interaction. More than 85% of cells can be permeabilized within the illuminated area. Nanostars demonstrated the highest optoporation efficacy under pulse laser irradiation at 1064 nm. The optoporation technology based on AuNPs with high absorbance seems to be an effective method for cell permeabilization with a precise control of cell treatment. This makes this novel technique a prospective tool for highly efficient transfection of extracellular substances into cells. 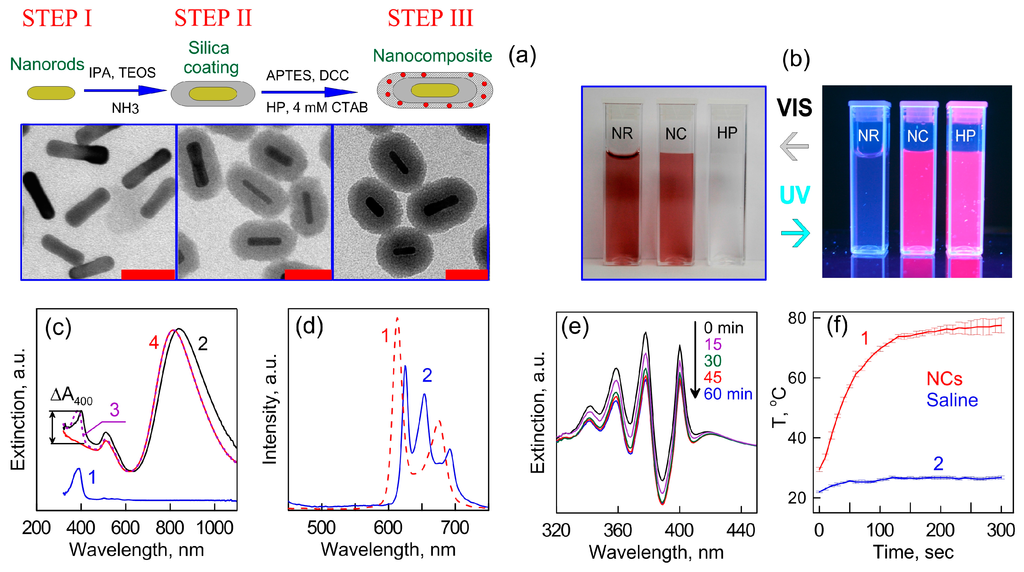 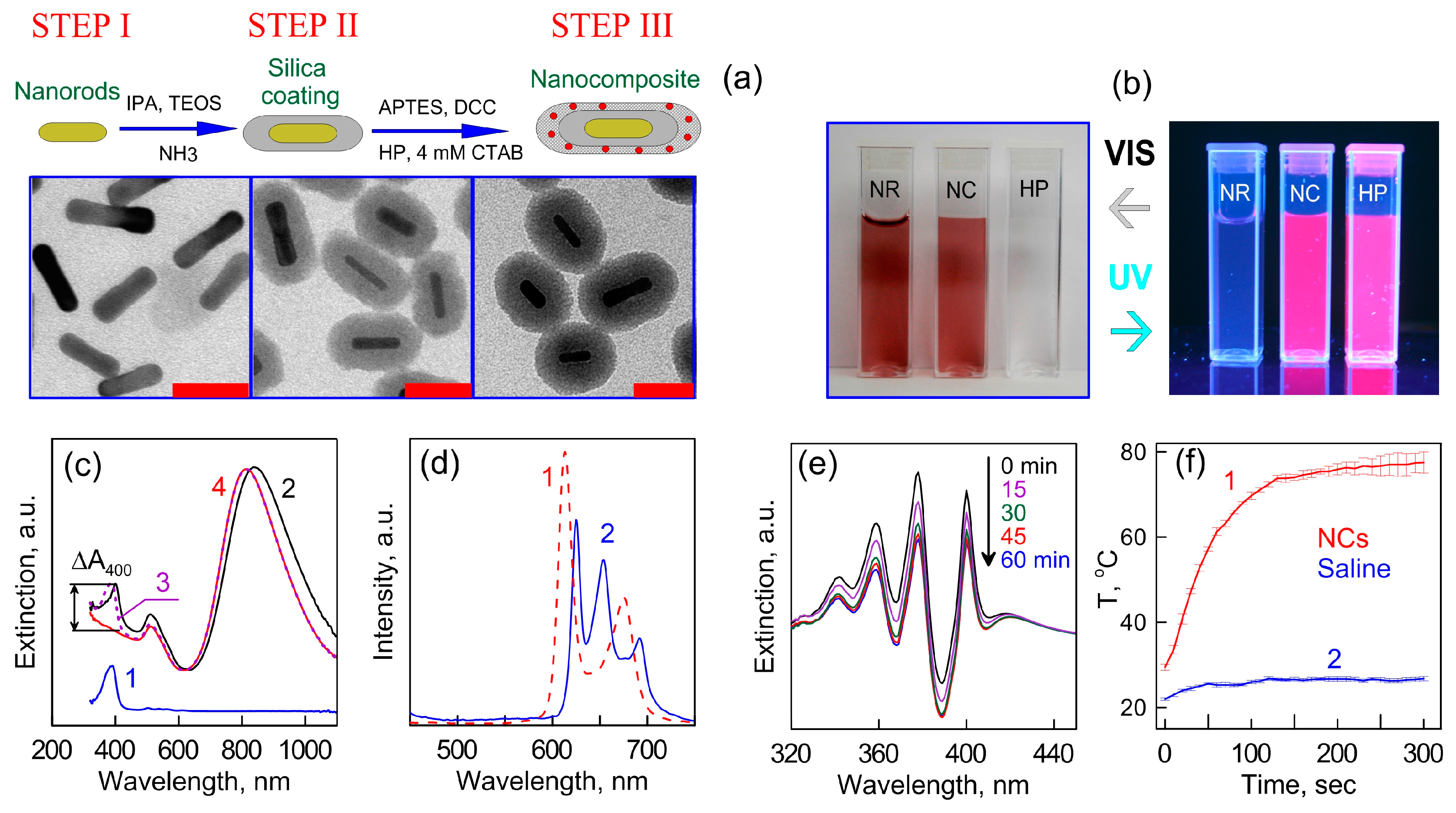 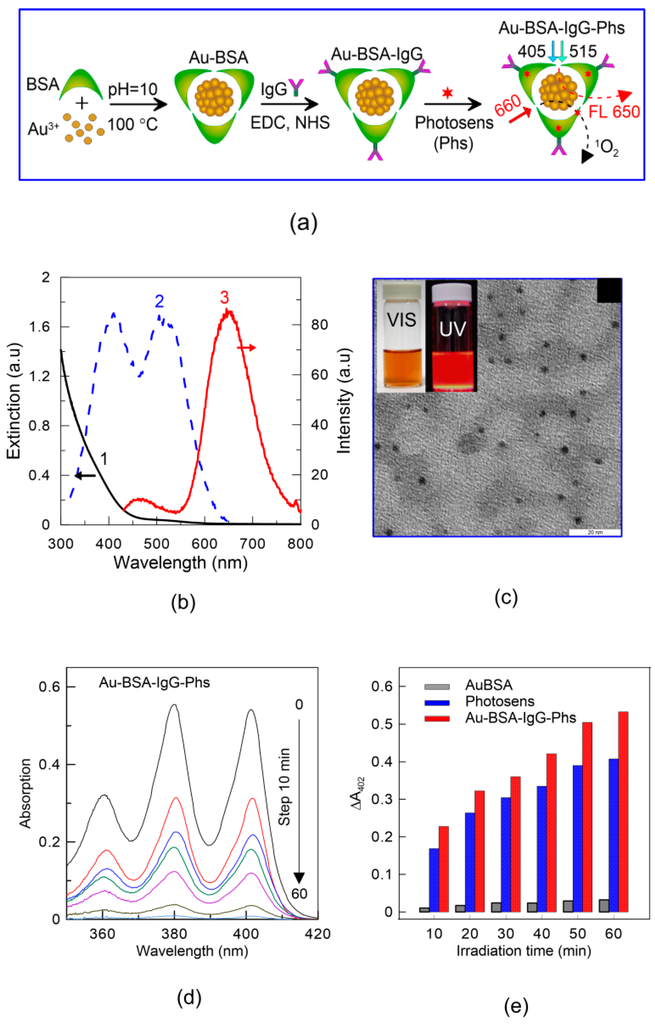 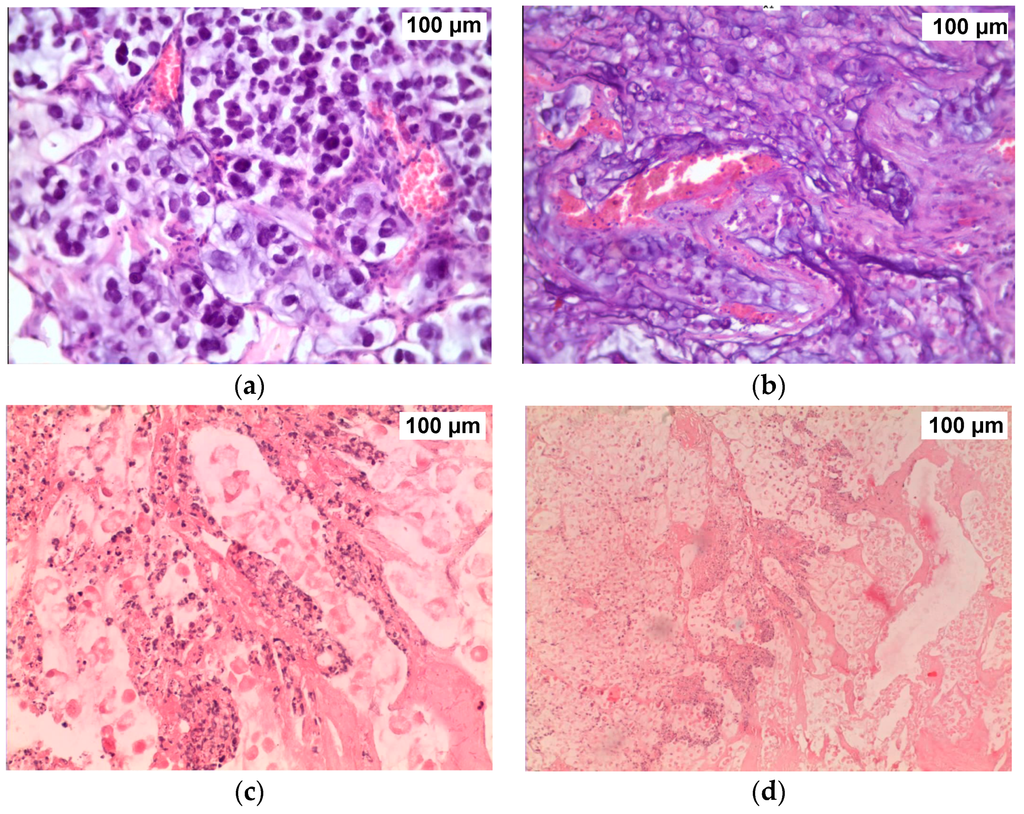 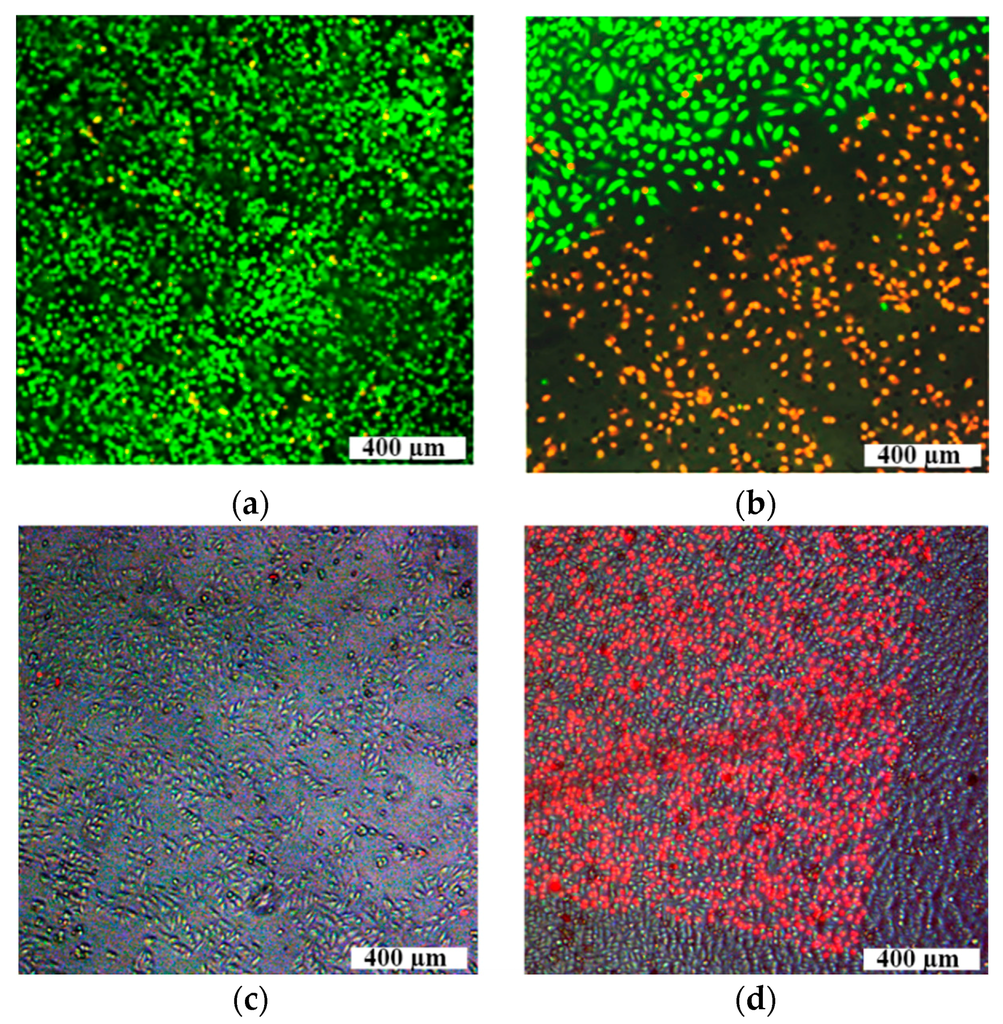 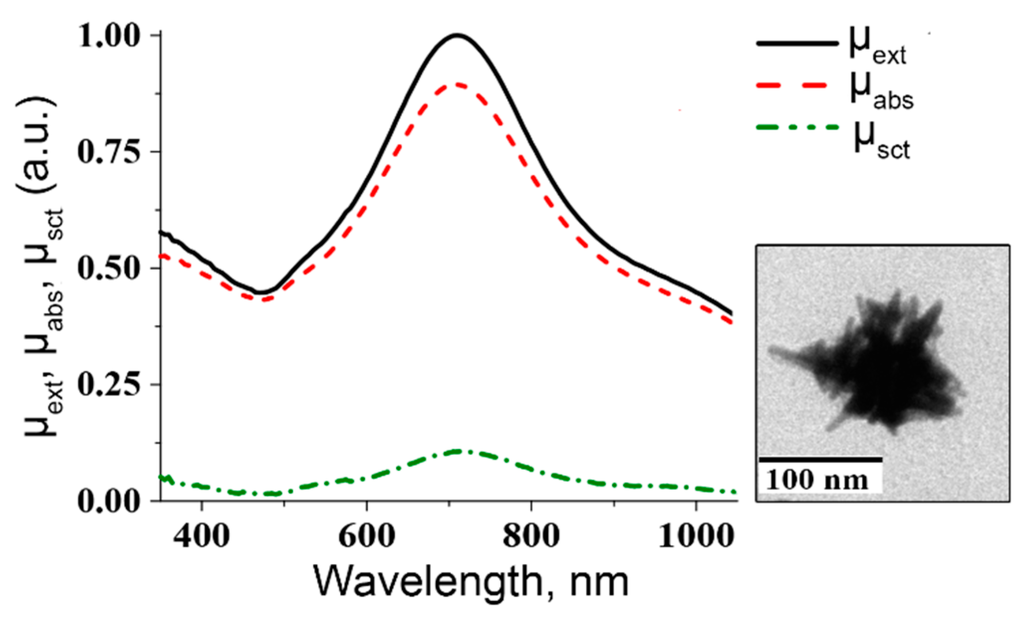 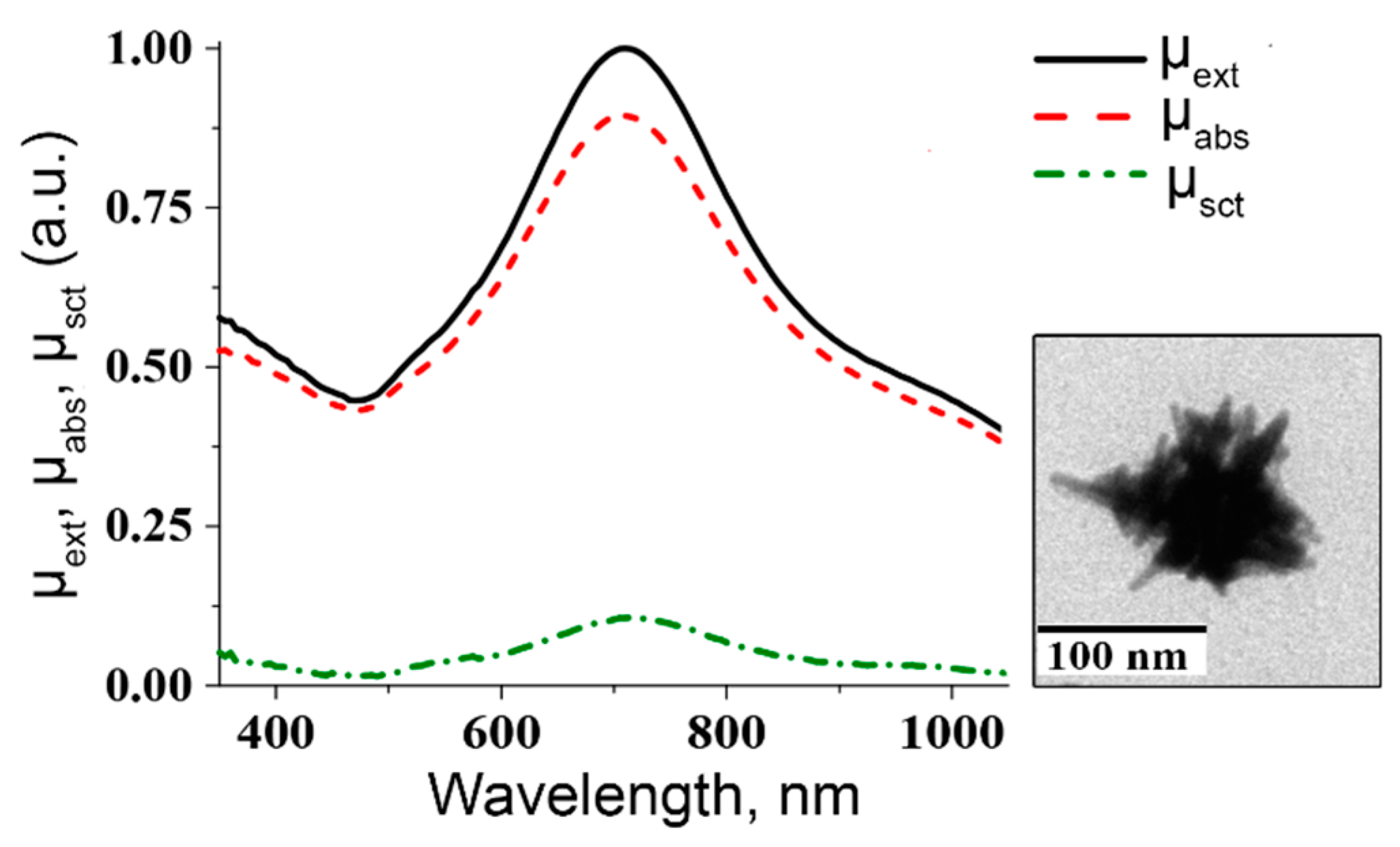 Table 1. Nanoparticles, PSs and experimental conditions for treatment of pathogens.