Malignant mesothelioma (MM) is a highly aggressive cancer that arises from the mesothelial cells of the pleura and peritoneum with a median survival of about one year [1,2,3]. It has now been clearly established in animal models and in patients that asbestos fiber inhalation can lead to neoplastic diseases, such as malignant mesothelioma and lung cancer [4,5], as well as pulmonary fibrosis. Current therapies, other than surgery in early disease states, are not curative [6]. MM represents a global health burden, causing approximately 3000 deaths per year in the United States and an additional 5000 deaths per year in Western Europe. Although asbestos use has been restricted in many Western countries, it is still used in many countries around the world and it is estimated that more than two million tons were mined in 2008. Due to the long latency period of MM development (often up to 30–50 years), and the continued exposure to occupational and environmental asbestos worldwide, the future incidence of MM will likely increase.
Persistent asbestos fibers cause the generation of reactive oxygen species (ROS) and oxidative tissue damage that are implicated in the pathogenesis of asbestos-induced cancers [4,5]. Inhaled asbestos fibers permeate into the lung, and ultimately to the pleural surface, where they are taken up by tissue phagocytes, primarily macrophages [7,8]. It is hypothesized that macrophages exposed to asbestos then undergo frustrated phagocytosis of elongated fibers [9]. This process generates harmful intracellular ROS leading to DNA damage, genomic instability, and ultimately malignant transformation of mesothelial cells [10,11,12,13,14]. A well-tolerated and safe agent with antioxidant properties could thus potentially be used to prevent the development of malignant mesothelioma (MM) in asbestos-exposed populations in a chemopreventive context. According to Greenwald, “the chemoprevention of cancer aims to prevent, arrest, or reverse either the initiation phase of carcinogenesis or the progression of neoplastic cells to cancer” [15]. There is a current unmet need to develop a chemopreventive agent effective against asbestos-induced mesothelioma in high-risk populations. Considering the poor prognosis associated with malignant mesothelioma [16,17], chemopreventive strategies may prove to be beneficial in preventing or delaying MM development.
Previous studies in various models of oxidative stress and pulmonary disease, including acute lung injury from hyperoxia, acid aspiration sepsis [18], ischemia/reperfusion [19,20] and radiation-induced oxidative tissue damage [21] suggested that the flaxseed lignan, secoisolariciresinol diglucoside (SDG) has these requisite antioxidant and ROS scavenging properties [22,23]. We thus hypothesized that SDG or an SDG-rich flaxseed lignan component (FLC)-rich diet might be useful in the chemoprevention of asbestos-induced malignant mesothelioma and have begun a series of studies to test the validity of this idea. In our first study, we evaluated the usefulness of an FLC-supplemented diet in a murine model of acute asbestos-induced peritoneal inflammation and oxidative tissue damage. Three days after intraperitoneal instillation of asbestos into mice, we observed an increase in oxidative and nitrosative stress in the peritoneal fluid, which was significantly attenuated by FLC diet [24]. These findings have led us to conduct more controlled in vitro studies where we can confirm that the effects were due specifically to the purified compound SDG, show that peritoneal macrophages were a key target in this antioxidant effect, and conduct additional mechanistic studies.
To study the chemopreventive usefulness of SDG, in preparation for animal and ultimately human studies, SDG was chemically synthesized (LGM2605) by a proprietary pathway [22]. Similarly to natural SDG extracted from whole grain flaxseed, LGM2605 is a free radical scavenger and antioxidant, with DNA-protective activity [23]. Importantly, in a recent study, LGM2605 showed potent cell-protective and antioxidant properties, while capable of inducing phase II antioxidant, cell-protective enzymes transcriptionally regulated by the nuclear factor (erythroid-derived 2)-like 2 (Nrf2)-antioxidant response element (ARE) signaling pathway [25].
In the present study, we evaluated the usefulness of LGM2605 in preventing asbestos-induced ROS generation and oxidative cell damage in murine peritoneal macrophages. Our objectives were: (1) to characterize the antioxidant response in murine peritoneal macrophages following asbestos exposure; (2) to evaluate the ability of LGM2605 to interfere with asbestos-induced ROS generation and oxidative cell damage in macrophages; and (3) to determine the potential molecular mechanisms through which LGM2605 exerts antioxidant effects following asbestos exposure.

We first empirically determined the optimal level of asbestos exposure (Figure 1a) and LGM2605 dosing (Figure 1b) in murine elicited peritoneal macrophages. We evaluated asbestos-induced ROS generation following cell exposure to various concentrations of crocidolite asbestos fibers (0, 1, 5, 10, and 20 µg/cm2). Macrophage exposure to crocidolite asbestos fibers led to significant ROS generation in a dose-dependent manner (Figure 1a). The 20 µg/cm2 dose of asbestos induced a robust 2.3-fold increase in ROS and was thus selected as the dose for all experiments performed. Additionally, we tested the antioxidant properties of LGM2605 at various concentrations (0, 10, 25, 50, and 100 µM) and determined a significant reduction in ROS following asbestos exposure in a dose-responsive fashion (Figure 1b). Treatment with 50 µM LGM2605 led to a significant 43% reduction in ROS relative to untreated macrophages and was selected as the optimal treatment dose for evaluating the preventive properties of LGM2605 in attenuating the deleterious effects of asbestos exposure. Importantly, the dose of LGM2605 (µM) used in the in vitro studies described here is comparable to tissue levels achieved following oral administration of a physiologically relevant dose in mice.

To investigate the underlying mechanisms behind the decrease in lipid peroxidation and oxidative stress by LGM2605 treatment, we evaluated protein and gene expression changes in heme oxygenase-1 (HO-1) and NADPH: quinone oxidoreductase-1 (Nqo1) (Figure 5), important enzymes stimulated by the Nrf2-ARE pathway critical in the detoxification of free radicals and reactive oxygen species. We first determined the kinetics of asbestos-induced protein expression of HO-1 and Nqo1. Starting at a very low baseline, asbestos exposure induced the expression of HO-1 (Figure 5a,b) significantly (p < 0.05) above baseline levels as early as 4-h post exposure. Levels of Nqo1 increased sharply after 12 h (Figure 5a,c). We therefore evaluated the effect of LGM2605 treatment on antioxidant enzyme gene expression at 8 and 24-h post asbestos exposure.

After evaluating the kinetics of antioxidant enzyme expression following asbestos exposure, we determined the effects of asbestos exposure on Nrf2 signaling. Cellular oxidative stress leads to the activation of the Nrf2-ARE pathway, which transcriptionally regulates many antioxidant and cytoprotective genes responsible for cellular homeostasis. We, thus, determined Nrf2 activation following asbestos exposure and assessed gene expression changes in HO-1 and NQO1.
We first determined levels of Nrf2 in macrophage nuclear extracts, an indicator of active Nrf2 that has exited the cytosol after being cleaved from Kelch-like ECH-associated protein 1 (Keap1), and determined the kinetics of Nrf2 nuclear accumulation following asbestos exposure (Figure 6a). Nuclear Nrf2 was low at baseline and did not significantly change over time. However, pretreatment with 50 µM LGM2605 led to significant (p < 0.0001) activation of Nrf2 signaling at baseline prior to asbestos exposure that remained elevated through the 12-h of observation (elevated 2.81-fold from control, non-asbestos exposed macrophages). Following asbestos exposure, we observed significantly (p < 0.0001) increased levels of nuclear Nrf2, with the highest concentration occurring after 2 and 12-h post exposure. Levels of Nrf2 from nuclear extracts of macrophages treated with LGM2605 and asbestos were significantly (p < 0.0001) elevated above asbestos-only exposure.
Upon determination of HO-1 and NQO1 gene expression, treatment with LGM2605-alone led to significant (p < 0.0001) elevations in mRNA levels (1.58 ± 0.21 and 1.58 ± 0.02 fold change from control, respectively) at all time points evaluated (Figure 6b,c). Importantly, although mRNA levels of HO-1 and NQO1 were significantly elevated above control after 8 and 24-h of asbestos exposure, treatment with LGM2605 further boosted antioxidant gene expression above asbestos-only exposure (Figure 6b,c) by an additional 28%–31% and 25%–26%, respectively.

2.6. Induction of Cellular Antioxidant Enzymes by Asbestos and Further Activation by LGM2605

When we evaluated protein levels of these Nrf2-inducible antioxidant enzymes, we observed increased protein expression in macrophages treated with asbestos and LGM2605 at both 8 and 24-h post asbestos exposure. Importantly, treatment of macrophages with LGM2605-alone led to a robust increase in the expression of both HO-1 and Nqo1 prior to asbestos exposure (2.45 ± 0.11 and 9.94 ± 0.49 fold change from control, respectively). Although protein levels of HO-1 (Figure 7a,b) and Nqo1 (Figure 7a,c) were significantly elevated above control after 8 and 24-h of exposure, macrophages treated with LGM2605 displayed a further increase in both antioxidant enzymes by 39%–40% and 60%–79%, respectively.

Synthesis of secoisolariciresinol diglucoside has been previously described [22]. Briefly, secoisolariciresinol diglucosides (S,S)-SDG (the major isomer in whole grain flaxseed) and (R,R)-SDG (the minor isomer in whole grain flaxseed) were synthesized from vanillin via secoisolariciresinol and a glucosyl donor (perbenzoyl-protected trichloroacetimidate under the influence of TMSOTf) through a concise route that involved chromatographic separation of diastereomeric diglucoside derivatives. Synthetic SDG (LGM2605) was reconstituted to a stock concentration of 10 mM and cells were exposed to 50 µM SDG 4-h prior to asbestos exposure (see Figure 2). Initial experiments were conducted using various concentrations of LGM2605 (0, 10, 25, 50, and 100 µM) to assess the dose-dependent effect of LGM2605 treatment (see Figure 1b). In all subsequent experiments, murine peritoneal macrophages were treated with 50 µM LGM2605 4-h prior to asbestos exposure.

Levels of intracellular ROS were determined using the cell-permeant fluorescent probe 2′,7′-dichlorodihydrofluorescein diacetate (H2DCFDA) (Molecular Probes®, ThermoFisher Scientific, Waltham, MA, USA). Upon cleavage of the acetate groups by intracellular esterases and oxidation, the nonfluorescent H2DCFDA is converted to the highly fluorescent 2′,7′-dichlorofluorescein (DCF). Elicited murine peritoneal macrophages were plated in a 96-well plate (2 × 104 cells/well) and exposed to various concentrations of sterile UICC crocidolite (SPI Supplies) asbestos fibers (0, 1, 5, 10, and 20 µg/cm2) and LGM2605 (0, 10, 25, 50, and 100 µM). The fluorescence intensity was then measured on a SpectraMax i3x Multi-Mode microplate reader (Molecular Devices, Sunnyvale, CA, USA) using an excitation wavelength in the range of 492–495 nm and a fluorescence emission detection at 517–527 nm.

Asbestos-induced cytotoxicity was determined by quantitatively measuring extracellular levels of lactate dehydrogenase (LDH) released into the cell culture medium. LDH levels were determined using a colorimetric assay (Pierce™ LDH Cytotoxicity Assay Kit, ThermoFisher Scientific, Waltham, MA, USA) according to the manufacturer’s protocol. Briefly, 50 μL of cell culture media was collected at 0, 1, 2, 4, 6, 8, 10, and 12-h post-asbestos exposure and transferred to a 96-well plate. The cell culture medium was incubated with 50 µL of reaction mixture, containing lactate, NAD+, diaphorase, and a tetrazolium salt. LDH conversion of lactate to pyruvate generates NADH, which is used by diaphorase to convert the tetrazolium salt to a red formazan product that was measured at 490 nm. Data are reported as LDH cytotoxicity (absorbance 490–680 nm).

The presence of nuclear factor (erythroid-derived 2)-like 2 (Nrf2) was determined in nuclear extracts isolated from macrophages exposed to asbestos and harvested at 1, 2, 4, 6, 8, and 12-h post asbestos exposure. Cytoplasmic and nuclear extracts were prepared using a commercially available nuclear extraction kit (Cayman Chemical, Ann Arbor, MI, USA). A transcription factor assay kit (Cayman Chemical, Ann Arbor, MI, USA) was used to detect nuclear Nrf2. The assay was performed according to the manufacturer’s protocol. The transcription factor assay kit utilizes a specific double-stranded DNA sequence containing the Nrf2 response element to bind to Nrf2 molecules present in the nuclear fraction. The presence of Nrf2 in the nucleus was detected by ELISA per the manufacturer’s instructions. The data are reported as the ratio of the absorbance at 450 nm to the protein concentration of the nuclear extract (µg). 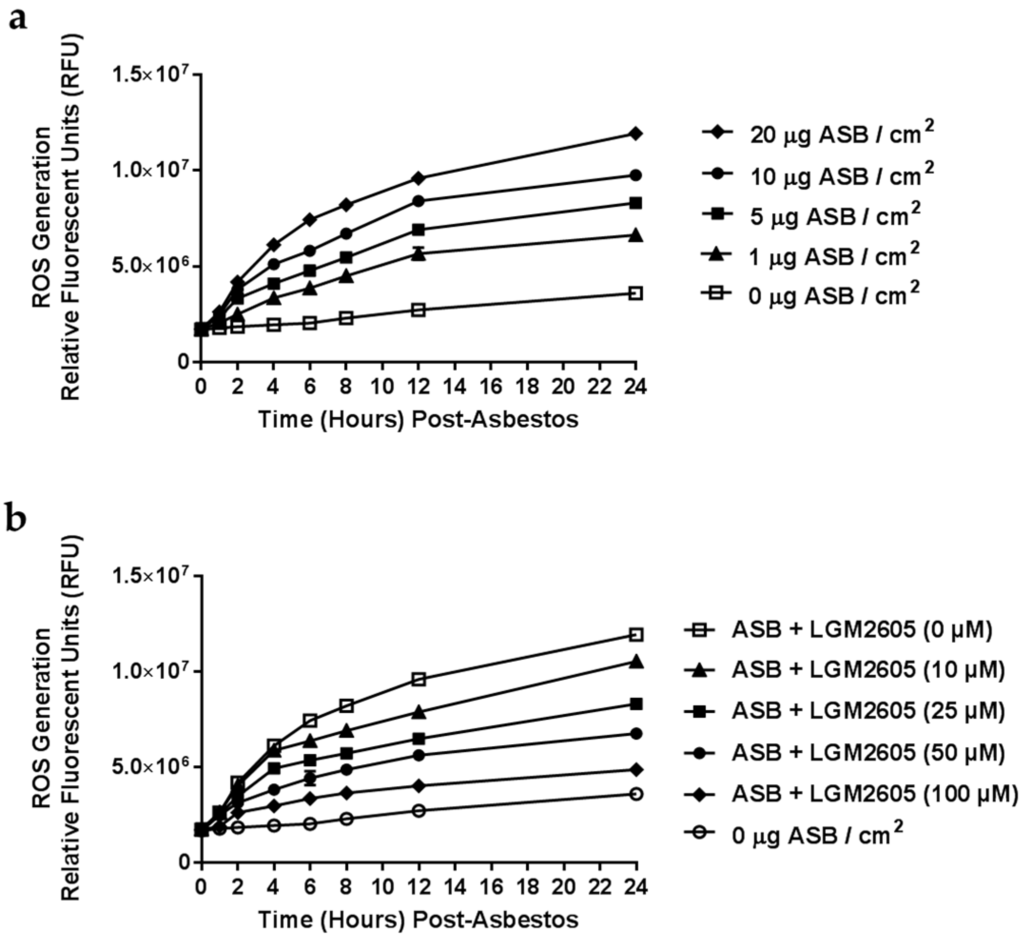 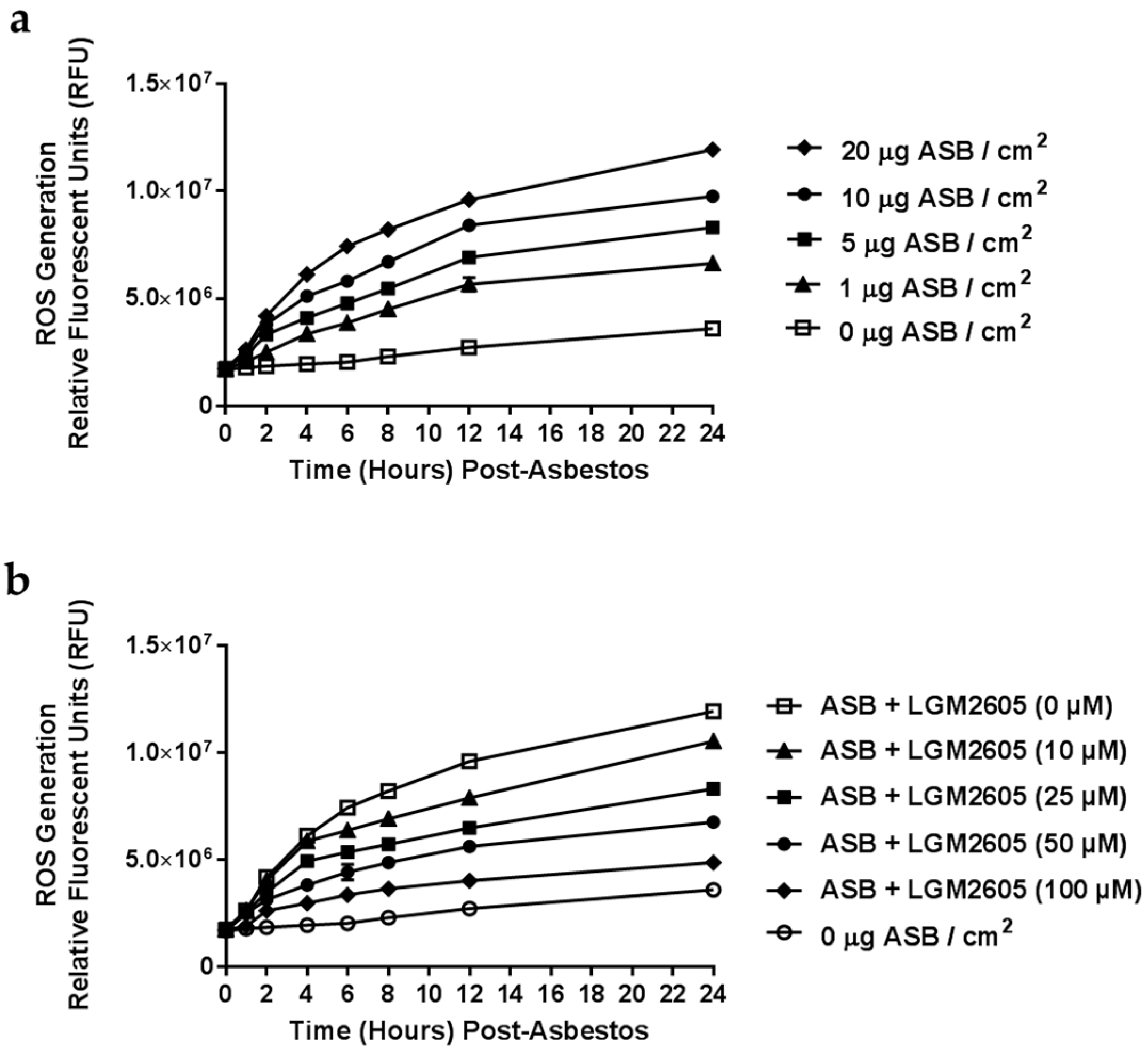 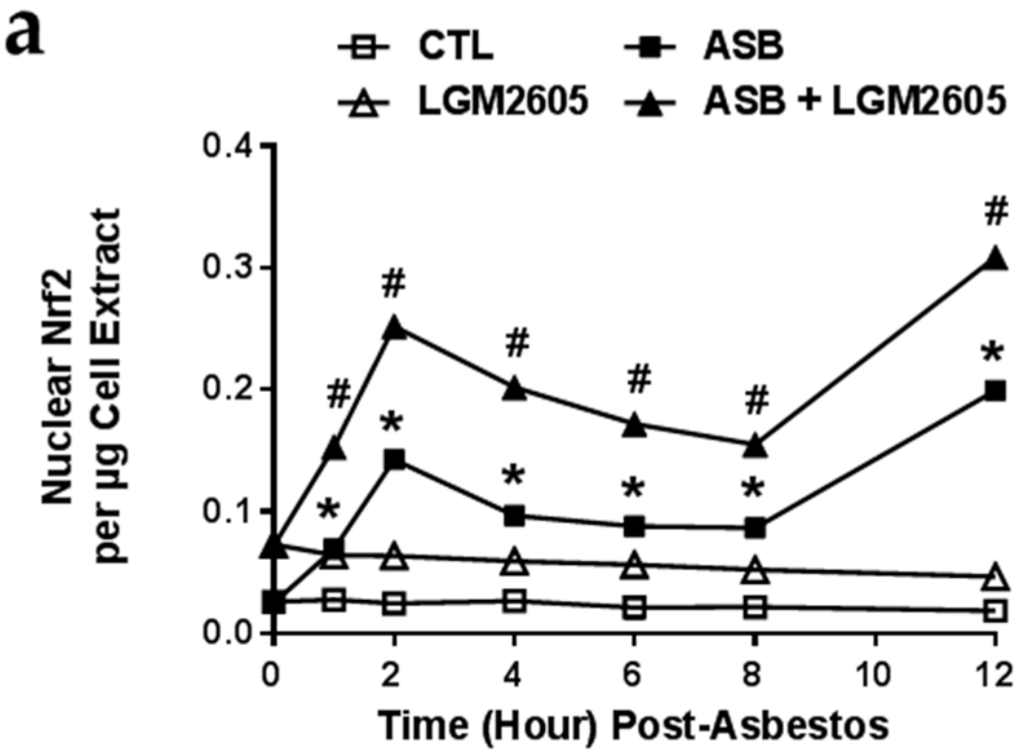 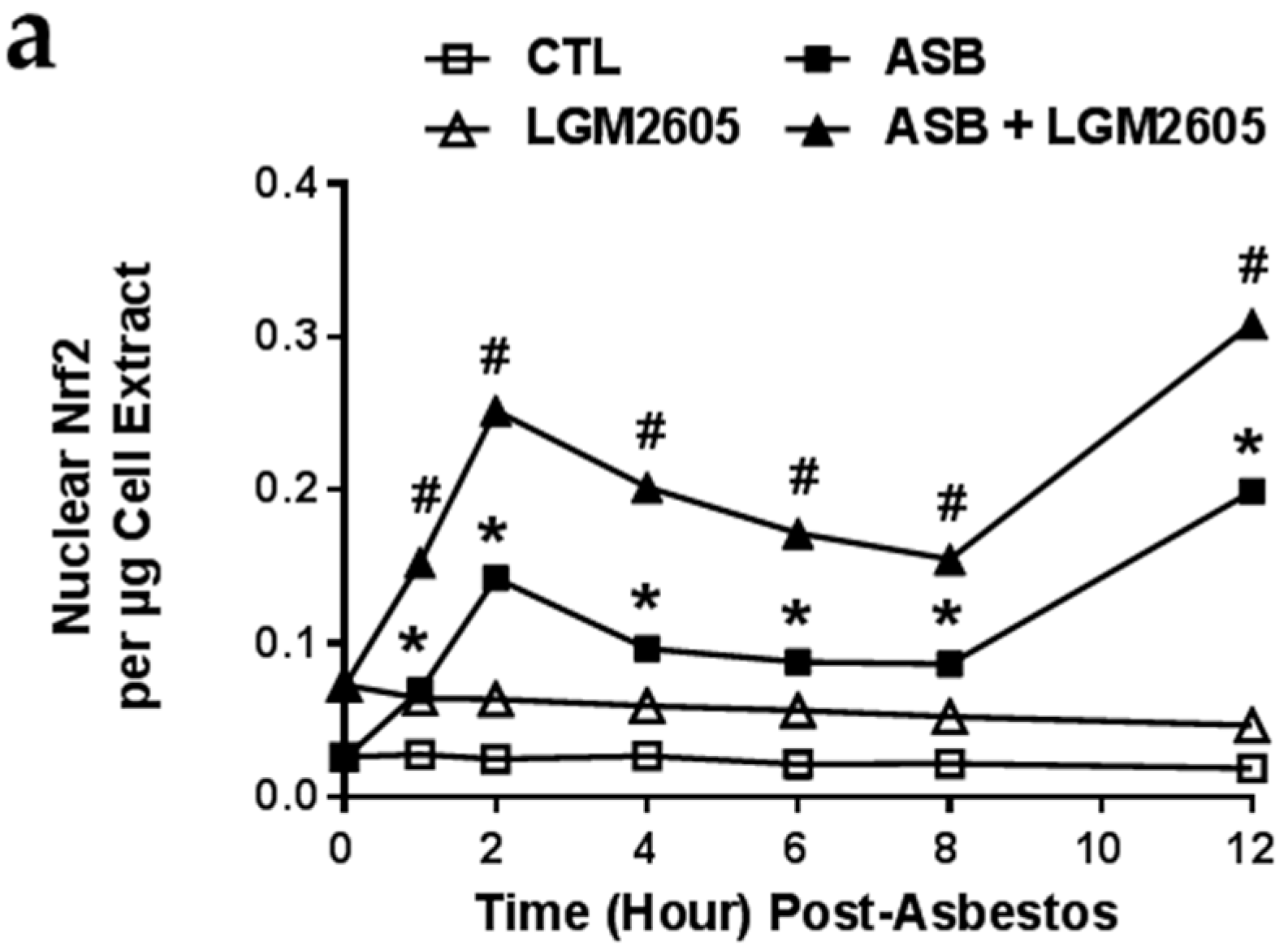 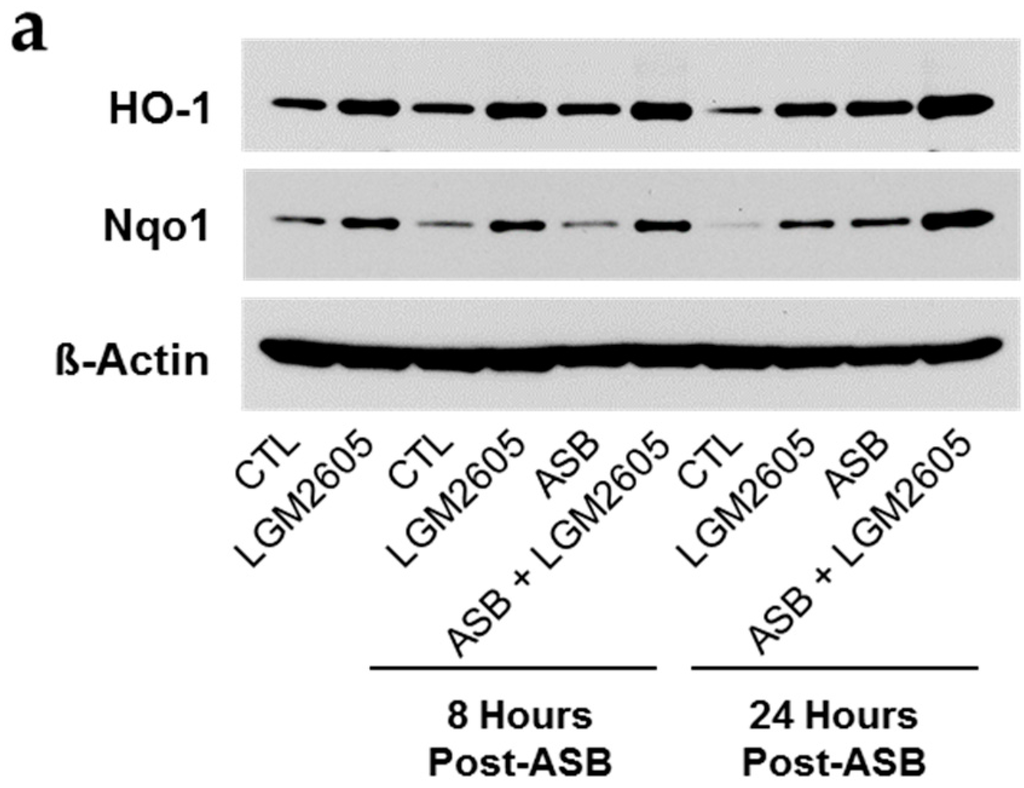