The objectives of this study were to characterize peptides found in unprocessed amaranth hydrolysates (UAH) and extruded amaranth hydrolysates (EAH) and to determine the effect of the hydrolysis time on the profile of peptides produced. Amaranth grain was extruded in a single screw extruder at 125 °C of extrusion temperature and 130 rpm of screw speed. Unprocessed and extruded amaranth flour were hydrolyzed with pepsin/pancreatin enzymes following a kinetic at 10, 25, 60, 90, 120 and 180 min for each enzyme. After 180 min of pepsin hydrolysis, aliquots were taken at each time during pancreatin hydrolysis to characterize the hydrolysates by MALDI-TOF/MS-MS. Molecular masses (MM) (527, 567, 802, 984, 1295, 1545, 2034 and 2064 Da) of peptides appeared consistently during hydrolysis, showing high intensity at 10 min (2064 Da), 120 min (802 Da) and 180 min (567 Da) in UAH. EAH showed high intensity at 10 min (2034 Da) and 120 min (984, 1295 and 1545 Da). Extrusion produced more peptides with MM lower than 1000 Da immediately after 10 min of hydrolysis. Hydrolysis time impacted on the peptide profile, as longer the time lower the MM in both amaranth hydrolysates. Sequences obtained were analyzed for their biological activity at BIOPEP, showing important inhibitory activities related to chronic diseases. These peptides could be used as a food ingredient/supplement in a healthy diet to prevent the risk to develop chronic diseases. View Full-Text
Keywords: amaranth; hydrolysis; bioactive peptides; extrusion amaranth; hydrolysis; bioactive peptides; extrusion
►▼ Show Figures 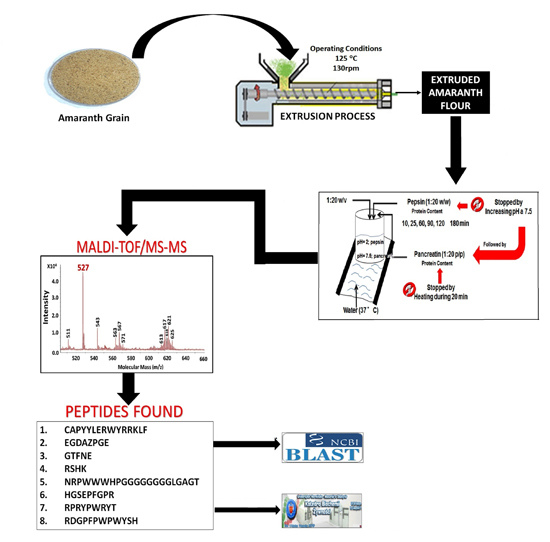