Mutactimycin AP, a New Mutactimycin Isolated from an Actinobacteria from the Atacama Desert

:
Bacteria belonging to the phylum Actinobacteria are a very good source of antibiotics, and indeed dominate the current clinical antibiotic space. This paper reports Mutactimycin AP, a new compound belonging to an anthracycline-type family of antibiotics, isolated from a Saccharothrix sp. This actinobacterial strain was isolated from the rhizosphere of lupine plants growing in the extreme hyper-arid Atacama Desert. Structural characterization was carried out using electrospray ionization-mass spectrometry (ESI-MS) and NMR spectroscopy in combination with molecular modelling. The compound was tested against the ESKAPE pathogens, where it showed activity against MRSA and five strains associated with bovine mastitis, where it showed activity against Enterococcus pseudoavium and Staphylycoccus Aureus subsp. Aureus.
Keywords:
Saccharothrix; mutactimycin; anthracycline; glycoside; anthraquinone; NMR; mass spectrometry; antibiotics; ESKAPE pathogens; bovine mastitis; dairy cattle

Actinomycetes are an important source of antibacterial agents with approximately two-thirds of antibiotics in clinical use being isolated from this phylum of GC rich Gram-positive bacteria [1]. These bacteria can colonize the rhizosphere of plants and form a beneficial relationship with the plants by inhibiting plant pathogens [1]. Streptomyces bacteria are the largest genus in Actinobacteria and the largest producers of antibiotics in the phylum [1,2,3]. Bacterial strains isolated from the Atacama Desert are particularly interesting because of their ability to produce a variety of important compounds such as Chaxamycins [4] and Abenquines [5] and several other classes of structurally diverse compounds [6]. For this study, several actinobacterial strains were isolated from the rhizosphere of lupine plants growing in northern Chile. Among these, one strain belonging to the genus Saccharothrix was isolated. This genus is known to produce interesting, glycosylated compounds [7,8].
In this paper we report the isolation and characterization of a new compound, mutactimycin AP (1) (Figure 1a) from the Saccharothrix strain isolated from the Atacama Desert. It belongs to a family of anthracycline-type compounds called mutactimycins [9,10] which tend to have antibacterial properties. Anthracyclines are also a broad class of highly effective anti-cancer compounds [11] which have an anthraquinone ring and an aminoglycoside as a carbohydrate side chain attached to the anthraquinone ring. The ring moiety typically tends to be tetracyclic with C7 of ring A being attached to the carbohydrate [12]. Doxorubicin (2) (Figure 1b), along with the other anthracyclines are a highly useful anti-cancer drug class which have been in clinical use for decades against a variety of cancers and as such only a few types of cancers are not susceptible to members of the class [13].
Mutactimycins have structures very similar to doxorubicin, the key differences being the absence of carbonylated substituents on ring A and the use of alkyl deoxy-glycosides [14] or deoxy-glycosides [15] as the carbohydrate moieties. Mutactimycins often show strong antibacterial activity typically against Gram-positive bacteria but weaker activity against gram-negative bacteria [14,15]. Examples of strong anti-bacterial activity of mutactimycins are those of mutactimycin A (3) (Figure 1c) and mutactimycin E against methicillin resistant Staphylococcus aureus [14,15]. This paper reports the structural characterization of mutactimycin AP. This paper also reports the biological activity of mutactimycin AP against one strain in the ESKAPE pathogen panel, which are a group of highly virulent nosocomial pathogens which cause life threatening and often fatal infections. The compound was also tested against five pathogens associated with bovine mastitis, a highly prevalent dairy cattle disease caused by bacterial infections, where it showed activity against two strains.

3.2. Isolation and Characterisation of the Compound

Saccharothrix sp. S26 was cultured in 6 L of tryptic soy broth (TSB- 30 g/L) at room temperature for three weeks, which resulted in a deep red colour consistent with the agar plate permeating throughout the culture medium. The secondary metabolites produced were adsorbed onto diaion HP-20 resin added at 60 g/L and after which the resin was extracted exhaustively with methanol which was evaporated under reduced pressure yielding about 10 g of extract. The extract was dissolved in milliQ water and partitioned thrice with dichloromethane (DCM), which revealed a fraction weighing about 1.84 g.
The DCM fraction was dissolved in 20 mL of 80% methanol and was subjected to flash chromatography with a gradient starting from 80% methanol and ending with an isocratic period of 15 min of 100% methanol at a flow rate of 12 mL/min using a Buchi Reveleris (Suffolk, UK) X2 flash chromatography system with a C-18 column (Flashpure ecoflex 80 g, particle size: 50 µm, pore size: 92–108 Å) as the stationary phase, which yielded four fractions. One of the fractions, weighing 380 mg, was subjected to high performance liquid chromatography (HPLC) using an Agilent (Cheshire, UK) 1100 series binary pump and 1100 series diode array detector (DAD) with a Sunfire C18(10 µm, 10 mm × 250 mm) column at 2 mL/min, resulting in Mutactimycin AP (1) being isolated as a brick-red solid weighing 150 mg. LC-MS was performed using an Agilent 1290 infinity UHPLC and a Phenomenex Kinetex XB-C18 (2.6 µM, 100 × 2.1 mm2) column with mobile phases as 5% acetonitrile + 0.1% formic acid and 94.9% water to 100% acetonitrile + 0.1% formic acid. The MS was performed using a Bruker Maxis Q-tof II (Coventry, UK) where the mass range was set from 100–2000 and capillary voltage was set to 4.5 kV, the nebulizer gas set to 4 bar, the dry gas set to 9 L/min, and the dry temperature was set to 220 °C. The MS/MS experiments were conducted under Auto MS/MS scan mode with a step collision energy from 80–200%. The Bruker Avance (Coventry, UK) III HD 400 MHz system with a liquid helium cooled Prodigy cryo-probe was used to measure the NMR spectrum at 25 °C.

Structures for the possible stereoisomers of 1 were built using the Avogadro software package (version 1.2) [21]. The lowest energy conformers of each were generated with the iterative meta-dynamics with the genetic crossing (iMTD-GC) method implemented in the CREST software package (version 2.11.2) interfaced to the extended tight-binding semi-empirical electronic structure code xTB (version 6.4.1) [22,23]. In all CREST calculations, the self-consistent charge tight-binding semi-empirical quantum chemical method GFN2-xTB was used [24]. This method is expected to be accurate for the studied structures and includes the recent D4 density-dependent dispersion correction which provides improved descriptions of non-covalent interactions that are likely to be important in these systems [24,25,26,27,28]. The adaptive linearized Poisson-Boltzmann (ALPB) continuum solvent model for methanol was used for all xTB calculations [29].
The lowest energy conformations obtained from the CREST calculations were then used as an input for re-optimizations at the density functional theory (DFT) level using the Orca electronic structure package (version 5.0.3) [30,31]. The dispersion-corrected r2SCAN-D4 meta-GGA DF approximation was used [31,32,33] in combination with the triple-ζ Def2-TZVP [34] basis set. Default integration grids were used and the resolution of the identity (RI) approximation for Coulomb interactions was employed with the Def2/J auxiliary basis set [35]. Solvent (methanol) effects were modelled using the conductor-like polarizable continuum model [36,37].

The genomic DNA of Saccharothrix sp. S26 was extracted with the QIAGEN DNeasy UltraClean Microbial Kit (Cat. No. 12224-50) following the manufacturer’s instructions.
Amplification of 16S rRNA was mediated by PCR using Phusion plus the green PCR master kit (Cat. No. F632S) with the universal primers 27F and 1492R. PCR conditions were: initial denaturation at 98 °C for 2 min; 30 cycles of denaturation at 98 °C for 15 s, annealing at 60 °C for 15 s and extension at 72 °C for 45 s; and final extension at 72 °C for 5 min.
The calculation of pairwise 16S rRNA gene sequence similarities to identify phylogenetic neighbors was realized using the EZBioCloud [40] MUSCLE algorithm from MEGA X [41] was used to align the 16S rRNA sequences. MEGA X software was used to generate the phylogenetic trees using neighbor-joining, maximum-likelihood, and maximum-parsimony algorithms based on 1000 bootstrap replicates. The trees were rooted using the 16S rRNA gene sequence of Umezawaea tangerina MK27-91F and Crossiella cryophila NRRL B-16238.

A new compound, mutactimycin AP (1), belonging to the mutactimycin family, a group of anthracycline-type compounds, has been isolated from a Saccharothrix found in the Atacama Desert. The structure of the compound was determined using HR-ESI-LCMS and NMR spectrometry. This is the first mutactimycin which does not have an oxygen at position 11. The stereochemistry of the compound was confirmed using 13C chemical shifts and through-space NMR spectrometry, after which it was validated using molecular modelling.
The compound showed antibiotic activity against methicillin resistant Staphylococcus aureus when tested against the ESKAPE pathogens. This is consistent with previously isolated mutactimycins and anthracyclines in general therefore mutactimycin AP can be considered a potential hit in battling this group of multidrug resistant bacteria. Compound 1 also showed activity against Enterococcus pseudoavium along with Staphylococcus aureus subsp. aureus. These strains are among a panel of pathogenic strains, against which the compound was tested, which are associated with bovine mastitis, a highly prevalent and complex disease among dairy cattle worldwide. Thus, 1 can be considered as a possible lead candidate for battling this devastating infection.
The strain, upon analysis of its genome, has been found to have an interesting phylogenetic tree with it having a close relationship with other extreme environment bacteria belonging to the genus Saccharothrix.
Actinomycetes have been hailed as an inexhaustible source of antibiotics with a fascinating and diverse range of structural moieties. In recent decades there has been an increase in the emergence of multidrug resistant strains across the world due to which there is a need for the development of novel anti-bacterial agents to combat them. Natural products provide excellent structural diversity compared to standard ways of discovering new potential lead molecules, therefore isolating them is a worthwhile pursuit.

The authors thank Valeria Razmilic, Jean Franco Castro and Juan A. Asenjo for isolating, maintaining, and obtaining the material transfer agreement, and sending the strain. The authors also wish to thank Russell Gray, Marine Biodiscovery Centre, Department of Chemistry, University of Aberdeen for his help with the NMR experiments. The authors also wish to thank P.S. Oberoi, I.C.A.R—National Dairy Research Institute, India along with Albrn Care, India for their continued support.

Samples of the compounds are available from the authors. 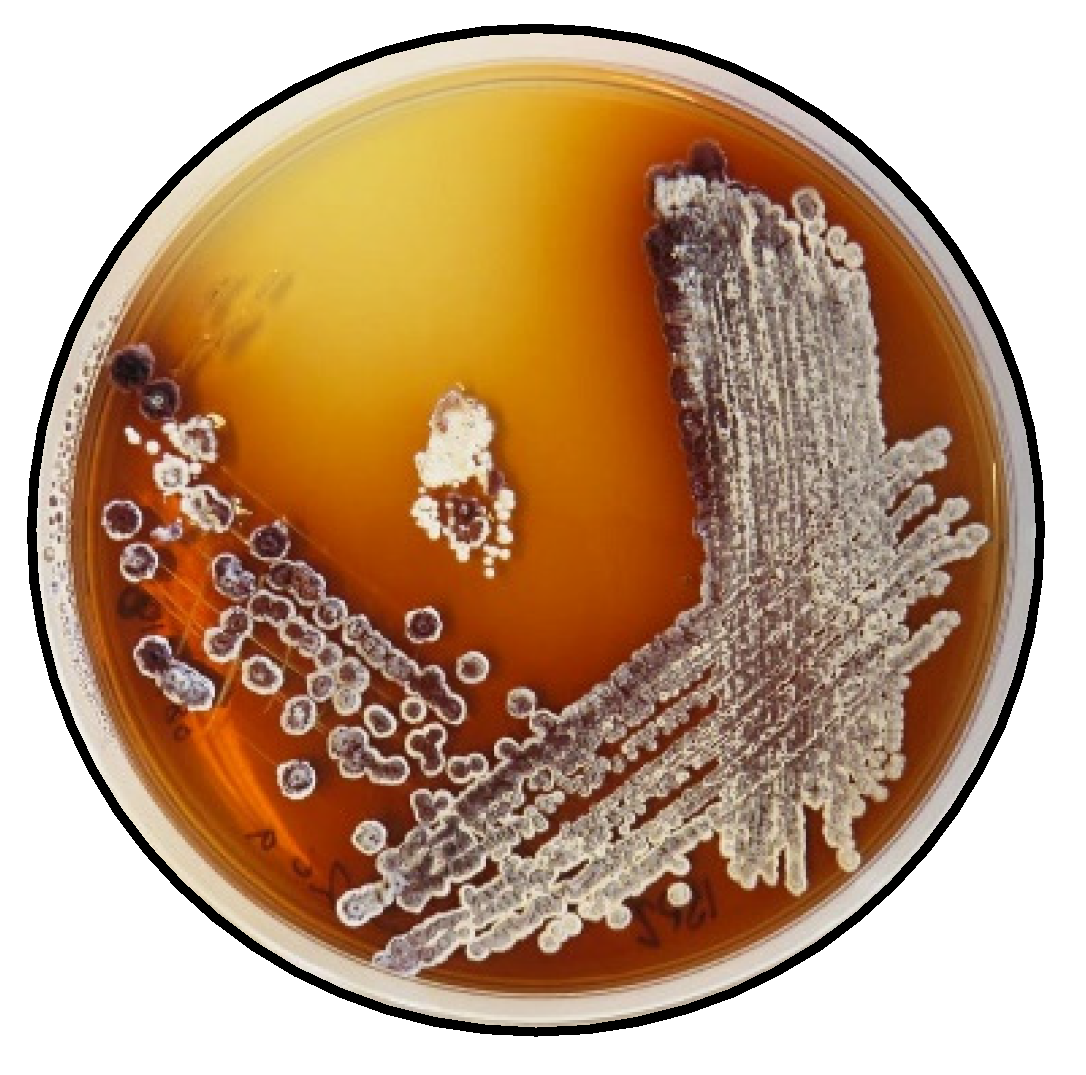