Inclusion Compound of Efavirenz and γ-Cyclodextrin: Solid State Studies and Effect on Solubility

Due to the lack of phytochemical composition data, the major goals of the present study on Amphiroa rigida J.V. Lamouroux were to: (a) investigate and compare volatilome profiles of fresh and air-dried samples obtained by headspace solid-phase microextraction (HS-SPME) and hydrodistillation (HD) followed by gas chromatography and mass spectrometry (GC/MS) analysis; (b) determine fatty acids profile by gas chromatography with flame ionization detector (GC-FID); (c) obtain the pigment profiles of semipurified extracts by high performance liquid chromatography (HPLC) and (d) evaluate the antioxidant and antimicrobial activities of its less polar fractions. The comparison of headspace of fresh (FrAr) and air-dried (DrAr) samples revealed many similarities regarding the presence and abundance of the major (heptadecane and pentadecane) and minor compounds. The hydrodistillate (HD) of DrAr profile was quite different in comparison to HD-FrAr. The predominant compound in HD-FrAr was (E)-phytol. In HD-DrAr, its percentage was approximately one-half reduced, but the abundance of its degradation product phytone and of unsaturated and oxygenated compounds increased indicating more intense fatty acid decomposition and oxidation during drying. The fatty acid determination revealed that the most dominant was palmitic acid (42.86%) followed by eicosapentaenoic acid (19.14%) and stearic acid (11.65%). Among the pigments, A. rigida contained fucoxanthin (0.63 mg g−1 of dry fraction), lutein (5.83 mg g−1), β-carotene (6.18 mg g−1) and chlorophyll a (13.65 mg g−1). The analyzed less polar fractions of A. rigida exhibited antioxidant scavenging activity with diammonium salt of 2,2′-azino-bis (3-ethylbenzthiazolin-6-yl) sulfonic acid (ABTS) assay up to 3.87 mg g−1 trolox equivalents (TE), and with the oxygen radical absorbance capacity (ORAC) assay up to 825.63 μmol g−1 TE (with carotenoids as the major contributors). View Full-Text
Keywords: red algae; extraction; volatile compounds; fatty acids; pigments; antioxidant activity red algae; extraction; volatile compounds; fatty acids; pigments; antioxidant activity
►▼ Show Figures 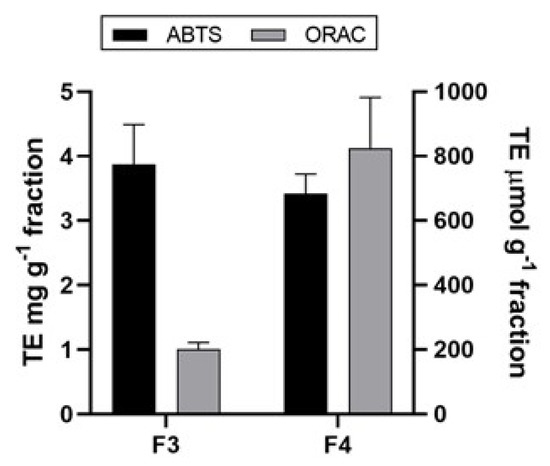