The Role of Hormones and Trophic Factors as Components of Preservation Solutions in Protection of Renal Function before Transplantation: A Review of the Literature
Next Article in Special Issue

HeHHe is the only potential molecule comprised of atoms present in the early universe that is also easily observable in the infrared. This molecule has been known to exist in mass spectrometry experiments for nearly half-a-century and is likely present, but as-of-yet unconfirmed, in cold plasmas. There can exist only a handful of plausible primordial molecules in the epochs before metals (elements with nuclei heavier than He as astronomers call them) were synthesized in the universe, and most of these are both rotationally and vibrationally dark. The current work brings HeHHe into the discussion as a possible (and potentially only) molecular candle for probing high-z and any metal-deprived regions due to its exceptionally bright infrared feature previously predicted to lie at 7.43 m. Furthermore, the present study provides new insights into its possible formation mechanisms as well as marked stability, along with the decisive role of anharmonic zero-point energies. A new entrance pathway is proposed through the triplet state () of the HeH molecule complexed with a hydrogen atom and a subsequent 10.90 eV charge transfer/photon emission into the linear and vibrationally-bright HeHHe form. View Full-Text
Keywords: helium chemistry; infrared spectroscopy; early universe; quantum chemistry helium chemistry; infrared spectroscopy; early universe; quantum chemistry
►▼ Show Figures 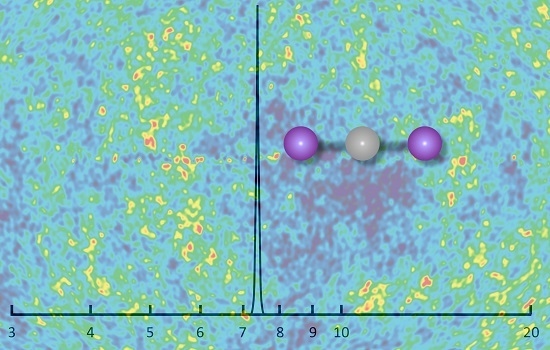