Sex-Related Differences of the Effect of Lipoproteins and Apolipoproteins on 10-Year Cardiovascular Disease Risk; Insights from the ATTICA Study (2002–2012)

Nonalcoholic fatty liver disease (NAFLD) is becoming a major public health problem worldwide. The study aimed to evaluate the concentration of eicosanoids in serum and liver tissue during steatosis progression and to assess whether eicosanoid change scores may predict liver tissue remodeling. Thirty six eight-week-old male Sprague Dawley rats were enrolled and sacrificed at different stages of NAFLD. Eicosanoid concentrations, namely lipoxin A4, hydroxyeicosatetraenoic acids (HETE), hydroxyloctadecadienoic acids (HODE), protectin DX, Maresine1, leucotriene B4, prostaglandin E2, and resolvin D1 measurement in serum and liver tissue with Agilent Technologies 1260 liquid chromatography were evaluated. For the liver and serum concentrations of 9-HODE and 13-HODE, the correlations were found to be strong and positive (r > 0.7, p < 0.05). Along with NAFLD progression, HODE concentration significantly increased, and change scores were more abundant in the liver. The moderate positive correlation between liver and serum (r = 0.52, p < 0.05) was also observed for resolvin E1. The eicosanoid concentration decreased during NAFLD progression, but mostly in serum. There were significant correlations between HETE concentrations in liver and serum, but their associations were relatively low and changes the most in liver tissue. Eicosanoids profile, predominantly 9-HODE and 13-HODE, may serve as a potential biomarker for NAFLD development. View Full-Text
Keywords: eicosanoids; NAFLD; NASH; 9-HODE; 13-HODE; biomarkers eicosanoids; NAFLD; NASH; 9-HODE; 13-HODE; biomarkers
►▼ Show Figures 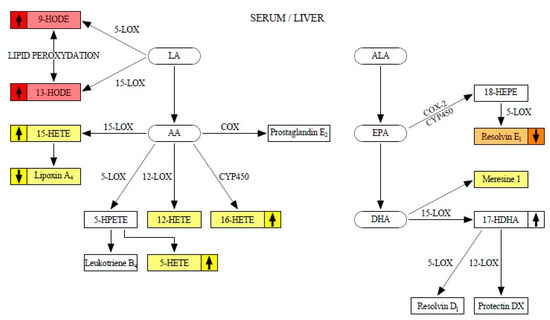