Antimicrobial Peptides as Probes in Biosensors Detecting Whole Bacteria: A Review
Next Article in Special Issue

Viral Hepatitis and Iron Dysregulation: Molecular Pathways and the Role of Lactoferrin

The liver is a frontline immune site specifically designed to check and detect potential pathogens from the bloodstream to maintain a general state of immune hyporesponsiveness. One of the main functions of the liver is the regulation of iron homeostasis. The liver detects changes in systemic iron requirements and can regulate its concentration. Pathological states lead to the dysregulation of iron homeostasis which, in turn, can promote infectious and inflammatory processes. In this context, hepatic viruses deviate hepatocytes’ iron metabolism in order to better replicate. Indeed, some viruses are able to alter the expression of iron-related proteins or exploit host receptors to enter inside host cells. Lactoferrin (Lf), a multifunctional iron-binding glycoprotein belonging to the innate immunity, is endowed with potent antiviral activity, mainly related to its ability to block viral entry into host cells by interacting with viral and/or cell surface receptors. Moreover, Lf can act as an iron scavenger by both direct iron-chelation or the modulation of the main iron-related proteins. In this review, the complex interplay between viral hepatitis, iron homeostasis, and inflammation as well as the role of Lf are outlined.
Keywords: liver; viral infections; hepatitis; iron; iron homeostasis; iron proteins; lactoferrin; lactoferrin receptors; hepcidin; ferroportin liver; viral infections; hepatitis; iron; iron homeostasis; iron proteins; lactoferrin; lactoferrin receptors; hepcidin; ferroportin

1. The Liver as Central Immunological Organ

The liver represents not only the largest visceral organ in our body but also an essential immunological organ, playing several crucial roles including detoxification, protein synthesis, and bile production [1]. The liver also exerts storage and recycling functions for many metabolites, vitamins, and minerals, including iron. Iron metabolism and homeostasis critically rely on the liver, being the major site for (i) the production of proteins that maintain systemic iron balance; (ii) the storage and mobilization of iron from hepatocytes to the circulation to meet metabolic requirements; (iii) iron recycling in conjunction with the spleen (splenic macrophages) [2].
Receiving both portal vein blood and arterial blood, the liver is a central component in the defense against blood-borne infections [3]. Oxygen-rich arterial blood enters the liver through the hepatic artery (HA). The greater part of blood (80%) entering the liver is supplied by the portal vein (PV), mainly coming from the intestine. The liver is exposed to non-self-proteins derived from nutrients or resident microbiota, which, combined with the constant presence of bacterial endotoxins, could normally trigger immune responses [4,5]. Injury to the liver, such as viral hepatitis, alcohol abuse or drug toxicity, and cholestatic diseases, leads to hepatic inflammation, which could induce the development of chronic liver disease and fibrosis [6]. For that reason, the hepatic capillary system is lined with different specialized cells such as the sinusoidal endothelial cells (LSECs), the largest population of macrophages or resident Kupffer cells (KCs), natural killer T (NKT) cells, and the largest reticulo-endothelial cell network [7,8]. Moreover, the liver also counts the largest population of natural killer (NK) cells. These innate lymphocytes play an important role in the protection from infection and tissue pathology [9]. In addition, Toll-like receptors (TLRs) such as TLR4, classical receptors for activating the immune system, are constitutively expressed on hepatocytes, LSECs, and hepatic stellate cells (HSCs) [10,11]. Other control cells are myeloid cells, such as monocytes, which monitor the liver vasculature [12]. In normal conditions, monocyte-derived cells can develop into liver dendritic cells (DCs) or monocyte-derived macrophages (MoMFs), but they are not included in the pool of local resident macrophages (Kupffer cells) [13].
The several populations of DCs are more classically associated with T cell activation in other tissues such as the spleen and lymph nodes [14]. They can enter into the liver as immature cells through the portal vein, then they continue to mature as they move to the central vein or as they transmigrate through the LSECs to enter in the Disse’s space [15]. Although DCs are primarily responsible for antigen presentation to adaptive immune cells, macrophages act as primary filter cells [16].
KCs can also recruit other immune cells, such as monocytes, into the liver, which are differentiated into interleukin (IL)-10 positive/IL-12 negative cells by hepatocyte growth factor, macrophage colony-stimulating factor (M-CSF) [17] or low-levels of lipopolysaccharide (LPS) stimulation, inducing the activation of Signal Transducer and Activator of Transcription3 (STAT3) and Smad and then inducing the blocking of NF-κB [18].
Plasmacytoid DCs make up a specialized DC population, which is abundant in the liver, with a fundamental role in viral defense mediated by the production of type I interferons (IFN) [19]. Altogether, the liver reticulo-endothelial system forms a greatly dynamic and complex network, constituting a primary line of defense against microorganisms coming from the gut epithelial barrier. Different mechanisms are present to trigger immune reactions in the liver to employ mechanisms for rapid activation in response to infectious diseases or tissue damage.
Depending on the type of liver disease, different triggers have been identified for activating the immune system. For example, TLR3 represents one of the main triggers in the defense against viral diseases. In the crosstalk between NK cells and KCs, TLR3 activation induces a higher IFN-γ response compared to TLR2 and TLR4, probably due to the induction of IL-12 without the presence of IL-10 coproduction [20].

2. Viral Infections of the Liver: Hepatitis

4. Lactoferrin and its Receptors

5. Antiviral Activity of Lactoferrin in Apo- and Metal-Saturated Forms

The antiviral activity of hLf was first demonstrated in mice infected with the polycythemia-inducing strain of the Friend virus complex (FVC-P) [145]. An antiviral activity of both hLf and bLf against enveloped and naked viruses has been shown [109,146]. In some in vitro studies, bLf in apo- and in metal-saturated forms exerts a similar antiviral activity thus indicating that Lf does not only inhibit viral infection through its iron chelating property but also hinders viral attachment to the target host cells through its competitive binding [109,147,148,149,150,151]. In particular, Lf can interact with negatively charged compounds such as glycosaminoglycans (GAGs), thus inhibiting virus-receptor interaction [152]. In addition to interacting with GAGs, Lf prevents viral infections by binding to dendritic cell-specific intercellular adhesion molecule 3-grabbing non-integrin (DC-SIGN) and LDL receptors [153,154]. Moreover, Lf exerts an antiviral activity against cytomegalovirus (CMV), herpes simplex virus (HSV), HIV, rotavirus, poliovirus (PV), respiratory syncytial virus (RSV), HBV, HCV, parainfluenza virus (PIV), alphavirus, hantavirus, human papillomavirus (HPV), feline calicivirus (FCV), adenovirus, enterovirus 71 (EV71), echovirus 6, influenza A virus, Japanese encephalitis virus, and tomato yellow leaf curl virus (TYLCV) [109,146]. The authors of these two reviews agree that the antiviral effect of Lf occurs in the early phase of infection, preventing the entry of viral particles into the host cells, either by blocking cellular receptors or by directly binding to the viral particles. The capability of Lf to exert antiviral activity, by binding to host cells or viral particles or both, strengthens the idea that this glycoprotein is “an important brick in the mucosal wall, effective against viral attacks” [103].

The liver contains the largest resident reticulo-endothelial cell network in the body, which composes the antigenic environment of the liver. This environment ensures that if a pathogen enters the liver, an acute immune response ensues, leading to self-limiting inflammation and to repair of the tissue. In instances in which inflammation is chronic, substantial cellular recruitment and tissue damage may result. In the presence of sustained inflammation, this damage is not always repaired properly, resulting in fibrosis and dysfunction. But also, a failure to initiate an appropriate immune response in the presence of viral infection or cancer can result in the development of chronic disease and organ failure. In particular, hepatitis represents a complex disease, one of the major public health problems worldwide. For example, as much as 40% of men with perinatally acquired hepatitis B virus infection will die of liver cirrhosis or hepatocellular carcinoma. As described for other inflammatory diseases, including Crohn’s disease and ulcerative colitis, hepatitis is associated to the activation and maintenance of inflammatory processes, which became one of the principal contributory causes to organ failure and development of concurrent pathologies, including cancer. Moreover, as emerging for this review, iron dysregulation induced by, but also inductor of, inflammatory disorders plays a crucial role in the activation and progression of hepatic viral infection. Indeed, HBV and HCV, even if through opposite paths, take control of iron-handling proteins, thus regulating intracellular iron content for their own needs. Altogether, viral infection, iron overload, and chronic inflammatory processes have been associated to increased morbidity and mortality of hepatitis.
For that reason, antiviral treatments able to exert multi-targeting activities against viral infection and replication as well as against inflammatory and iron dysregulation represent a promising tool to counteract hepatic failure and injury. In this respect, a protein belonging to the innate immunity, Lf, presents a well-known intrinsic antiviral activity, which makes this protein an interesting candidate for application as a drug carrier in hepatitis. Overall, the capacity of Lf to act as an anti-inflammatory agent is based on its ability to down-regulate pro-inflammatory cytokines involved in the complex orchestration of iron homeostasis, mediated by the major iron-handling proteins, such as TfR1, Ftn, Fpn, and Heph/Cp. Of note, Lf in physiological conditions does not exert any effect on host cells, whereas in pathological ones possesses “the ability to sense the immune activation status of an organism and act accordingly” [178].
Altogether, different studies are contributing to understand the fine-tuning of immune responses in the liver from homeostasis to disease, starting to consider that some of these aspects will represent novel targets for future therapies in acute and chronic liver diseases.

We thank Ludovica Garro, Sapienza University of Rome, for the assistance with the revision of the manuscript and for the comments that improved the present review. 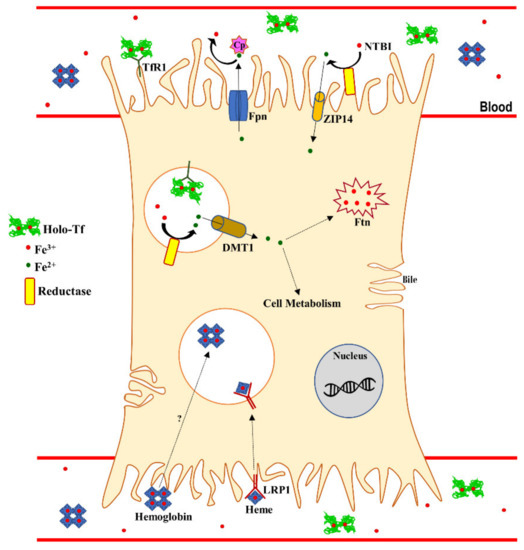 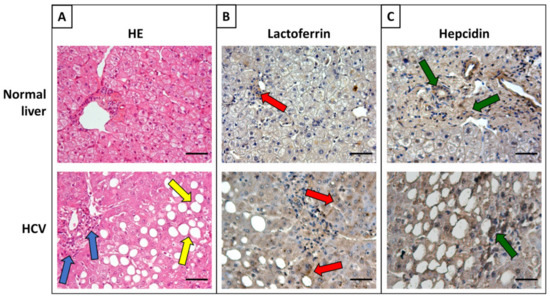