Lactoferrin (Lf) is a conserved iron-binding glycoprotein with antimicrobial activity, which is present in secretions that recover mucosal sites regarded as portals of invaded pathogens. Although numerous studies have focused on exogenous Lf, little is known about its expression of endogenous Lf upon bacterial infection. In this study, we investigated the distribution of Lf in mice intestine during Escherichia coli (E. coli) K88 infection. PCR and immunohistology staining showed that mRNA levels of Lf significantly increased in duodenum, ileum and colon, but extremely decreased in jejunum at 8 h and 24 h after infection. Meanwhile, endogenous Lf was mostly located in the lamina propria of intestine villi, while Lf receptor (LfR) was in the crypts. It suggested that endogenous Lf-LfR interaction might not be implicated in the antibacterial process. In addition, it was interesting to find that the infiltration of neutrophils into intestine tissues was changed similarly to Lf expression. It indicated that the variations of Lf expression were rather due to an equilibrium between the recruitment of neutrophils and degranulation of activated neutrophils. Thus, this new knowledge will pave the way to a more effective understanding of the role of Lf in intestinal mucosal immunity. View Full-Text
Keywords: Lactoferrin; intestine; antibacterial; inflammatory response; neutrophil Lactoferrin; intestine; antibacterial; inflammatory response; neutrophil
►▼ Show Figures 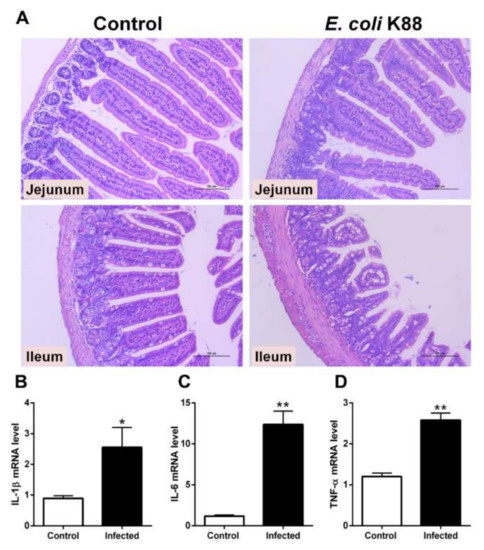