The present study aimed to evaluate the effect of the most common antidepressants on aquatic protozoa. Spirostomum ambiguum was used as the model protozoan. The biological activity of four antidepressants, namely fluoxetine, sertraline, paroxetine, and mianserin, toward S. ambiguum was evaluated. Sertraline was found to be the most toxic drug with EC50 values of 0.2 to 0.7 mg/L. The toxicity of the antidepressants depended on the pH of the medium and was the highest in alkaline conditions. Sertraline was also the most bioaccumulating compound tested, followed by mianserin. Slow depuration was observed after transferring the protozoa from the drug solutions to a fresh medium, which indicated possible lysosomotropism of the tested antidepressants in the protozoa. The biotransformation products were identified using a high-resolution mass spectrometer after two days of incubation of the protozoa with the tested antidepressants. Four to six potential biotransformation products were observed in the aqueous phase, while no metabolites were detected in the protozoan cells. Because of the low abundance of metabolites in the medium, their structure was not determined. View Full-Text
Keywords: Spirotox; fluoxetine; sertraline; paroxetine; mianserin; pharmaceuticals in the environment Spirotox; fluoxetine; sertraline; paroxetine; mianserin; pharmaceuticals in the environment
►▼ Show Figures 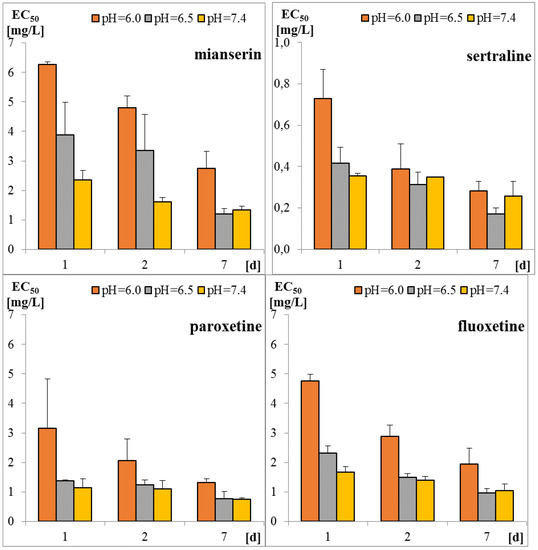